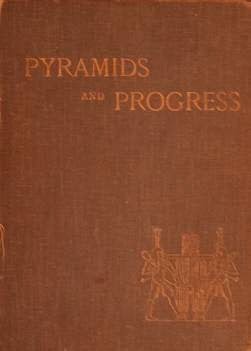 
Yes, I know I am writing a review of a 111-year-old book but hey I am a live one unlike the participants in this book whom all have long past into the fossil record. The book opens with a plate of 30 scarabs in the authors collection as well as a corresponding page identifying the rulers they represent. The collection is admirable with examples ranging from Khafra of the IVth Dynasty to examples of the Middle Kingdom kings and representing all of the Thutmoside kings except Thutmosis IV with scarabs well into the XXVth Dynasty including Tihirkah.


The author was also in possession of a cylinder seal of the Vth Dynasty King Nefer-Ar-Ka-Ra. Mr Ward was given the good graces of Dr. Flinders Petrie and the Egypt Exploration Fund with the introduction to the book from the Reverend Professor Sayce. The introduction by Professor Sayce is a lovely but short view of the modern restoration of this most ancient of landscapes of which Professor Sayce says,


"Nowhere else in the world can we find the past and the present ranged as it were so closely side by side or so incongruously mingled together."


Professor Sayce gives background experience of Mr. Ward and his impressive collection of scarabs with this Professor Sayce finishes out his introduction with some off colored nineteenth century ideals of justice and morality.


Chapter one "The Doorways of Egypt" opens with a picture of a bust of Alexander the great. The author enters Egypt from port Said on the Suez canal talking about the city of Pelusium 20 miles to the east. The Pelusiac branch of the Nile having become silted up in ancient times rendered the city uninhabitable. The site having become a swamp with immense mounds covering the remains of the ancient city.


The author tells us about the history of the delta and it's cities including the men who explored this land like M. Mariette who found in the far off mounds the city of Tanis. We are confronted by a number of lovely old photos of statuary including a triad in Ismalia park.


At the railway station of Tel-El-Kebir Mr. Ward tells us that the place was where British soldiers had crushed an Arabi rebellion in 1882. The author views the graveyard and says


"The little graveyard, beautifully tended and walled round, contains the bones of many of our soldiers who fell on that day."


In Alexandria, the author recommends the Greco-Roman museum looked after by Dr.Botti who found that cities ancient Serapeum. Of Pompey's pillar, the author says,


"Pompey's pillar is a noble shaft of Assouan granite". He continues "Dr.Mahaffy has proved that it was made undoubtedly from an Egyptian Obelisk."


So many wonderful old pictures of Cairo including one of the processions of a tent containing the holy carpet on its journey through the streets on it's way to Mecca. Mr. Ward says of the procession,


"Everyone pretends to be going on the journey with it, but only a few hundreds actually make the journey."


In chapter 3 we find ourselves on the pyramid platform of Gezah, Mr. Ward tells us about the ownership of King Khufu's pyramid as identified by others in red paint on the pyramids internal blocks. Mr. Ward adds,


"Subsequently, Dr. Petrie found a plummet with Khufu's name, in the debris, which had possibly been buried with him."


Soon it is sunrise and the elegant Mr.Ward is in the rose granite temple of Khafra on the Gizeh plateau sipping coffee made for him by the tall handsome guardian of the temple. On his journeys, the author all the while is collecting small scarabs and other small antiquities including a lovely little green basalt sphinx.


He also makes the acquaintances at Sakkarah of M.de Morgan who takes Mr. Ward down the shaft to show him the catacombs of the Princess' where M. de Morgan found two caches of fabulous jewels belonging to the Middle Kingdom Princess'. The in situ photo of King Usertesen,s boat is one of my favorites.


We find two facing photo's one of which is the obelisk of Heliopolis among the trees. The other is a depiction of a frieze discovered by Dr. Petrie which shows King Usertesen I dancing before the God Min, a little sign saying so has been placed over Min's penis.


The author visits the temples of Seti I and Ramses II at Abydos including their king's lists but the jewel of this chapter is the small black and white photograph of a painted wall from Seti's temple.


The fine Mr. Ward tells the reader of the Ptolemies leading to Cleopatra VII. Among the pictures of this chapter is a photo of the half buried temple of Denderah with it's many defaced reliefs.


Some of the best images are of Queen Hatasu's famous temple at Deir El Bahari including a full page image of the fluted columns of the Anubis shrine. The picture of the temple from afar reveals the unrestored monument in all its survival.


The final image of Hatasu's temple shows a colonnade littered with rubble from the cliffs above. Mr.Ward and his party visit the temples at Luxor by moonlight and has to go down several dozen steps in order to visit the interior of the partial dugout temple at Esnah in which a mosque sits on the roof.


The image of the interior and exterior facades of the temple of Kalabsheh with rubble is very impressive in the visual decay of that temple at the end of the 19th century. While the temple of Dendur stands where it stood for thousands of years and now one of the stars in New York's Metropolitan Museum of Art.


As interesting as the book is it is the last chapter and its pictures of the creation of reservoirs at Assouan and Assiout and the repair of the old barrage near Cairo in the last years on the nineteenth century that is particularly fascinating. All in all the journey is of fine class in a land before tourist amounted in the millions and when a visitor could explore Egypt as a man and not as livestock.

Pyramids and Progress
Posted by Timothy Reid at 3:23:00 PM