The Way to Eternity 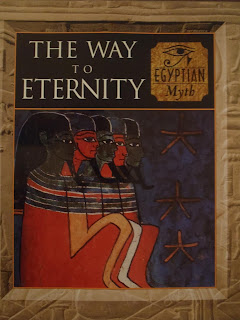 After the last book, I reviewed I needed something a little easier to read and this child-friendly read seems like a possibly pleasant choice though having said that it must be acknowledged that Egyptian mythology is not actually a child-friendly topic. The book should be good with Dr. Joanne Fletcher as a consultant on this project. A quick glance through this one hundred and thirty-seven-page publication reveals the book contains a number of images of objects that are new to this reader and of course many pictures of the usual brick a brack including King Tutankhamun's treasures.

The book opens with a slightly confused telling of Napoleon and his men conquering Egypt in 1798 with his soldiers at Thebes in awe of the monuments there then switches to Napoleon at Giza. A nice half page map gives a good outlay of Egypt and her ancient cities. The dawn of Egyptian civilization and the river Nile molded the Egyptian people into sustaining agriculture according to the seasons of the river. The politics of the country are directly related to the various competing theologies with the power of literacy determining a persons station in life.

A brief but nice timeline is set down for the young reader as the author takes us into the afterlife and on to the later dynasties. A two-page spread of jewelry and amulets is a lovely display with a number of pieces I have not seen elsewhere with two fish. The authors move on to the creation myths complete with the many tales of the sun god Re including the famous legend of Re sicking the lioness goddess Sekhmet to destroy humankind. The many apparitions of Re include the orb of the Aten worshipped by the heretic Pharaoh Akhenaten. A section on the houses of the gods is a pretty layout with a number of images of interest.

The book is filled with sub-articles which occupy large portions of the book and of which can be a little confusing as I have lost my place a number of times. In the next chapter, we are on to astronomy and the Egyptian calendar. The pantheon of gods and goddess' now moves on the list to gods of war and others for fertility. It is hard to review the list of gods and not think of Isis who may be ancient Egypt's most successful god being revered well into Roman times and worshipped as far away as Great Britain.

The worship of animal gods led to huge quantities of animal mummies to fill sacred catacombs with offerings from ancient pilgrims to those gods. The author quotes Herotodus on a house fire:

"Nobody takes the least trouble to put out the blaze for it is only the cats that matter. Everyone stands in a row...to protect the cats which nevertheless slip through the line, or jump over it, and hurl themselves into the flames. This causes the Egyptians deep distress."1

After the murder of Osiris Osiris's son, Horus set out to gain his thrown from his uncle Seth who had murdered his father and stolen the throne for himself. These neverending battles eventually frustrated the gods though, in the end, Isis catches Seth into agreeing that the rightful heir to the throne was Horus. The numerous color pictures include an unusual statue of Seth and a fragment from the book of the dead of Hirweben depicting the god of chaos fighting Apophis on the sun gods journey through the underworld.

The power of earthly kings and the turmoils the pharaohs endured brought heavy burdens on the ruler who is the responsible for his peoples well being and happiness.

"Beware of subjects who are nobodies,
Of whose plotting one is not aware.
Trust not a brother, know not a friend,
Make no intimates, it is worthless.
When you lie down, guard your heart yourself,
For no man has adherents on the day of woe.
I gave to the beggar, I raised the orphan, I gave success to the poor as to the wealthy;
But he who ate my food raised opposition, He to whom I gave my trust used it to plot"2

From here the author moves onto the varied myths attached to kingships such as the divine birth of Hatshepsut and the dream a prince named Thutmosis had in which the great Sphinx at Giza promised Thutmosis the throne if he had the sand cleared from around the Sphinx.

The religious texts of the times determined the evolving practices of burial including the art of mummification and the insertion of magical items in the tomb and mummy to help on its journey through the afterlife to reanimate in the heavenly Field of Reeds. The legend is told of a son of Rameses II who vied for a book of magic by the God Toth that was discovered in an ancient tomb.

The subject of magic cannot be mentioned without the tales of the ultimate magician the Goddess Isis and though the God Toth was its inventor nobody rivaled Isis whose worship took place before recorded time up to late Roman times long after her fellow gods had been forgotten. The book closes with a number of fascinating and well told ancient tales that have come down to our generation.

I do not think that I have reviewed a Time Life book before I guess it was because I expected that Time life stood for a quality presentation for a growing families budget making my instincts right on with The Way to Eternity.