The Eye of Re on the Mummy of Pharaoh Seti I 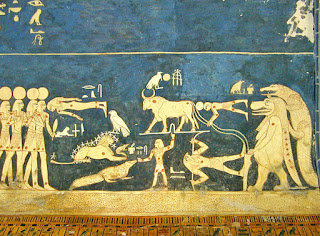 By the time Pharaoh Seti I, was buried in 1279 BC he had restored Egypt to the former glory lost during the Amarna period of a half-century earlier. Seti left as a tribute to his reign in temples such as at Abydos with some of the finest raised reliefs known in Egyptian art of the New Kingdom. Seti's fourteen-year-long reign also resulted in one of the finest tombs ever constructed in Egypt and certainly the finest in the Valley of the Kings at Thebes.


Seti's gorgeous tomb walls were prepared with all the spells he would need to find his way through the underworld in safety. As the king's body was being mummified by priests workers carefully filled the chambers of his tomb with every provision Seti was going to need for his reign in the afterlife. His tomb would have contained his favorite foods, his clothes, regalia, and furniture he used in life including his thrones and even his chariots.


Some seven hundred magical figures who would do Seti's work for him were also placed within his sepulcher, and among the few things found still in the tomb when Giovanni Belzoni discovered it in 1817. Seti's alabaster sarcophagus being the great prize still in the tomb except by then its lid had been smashed and King Seti's mummy long gone. 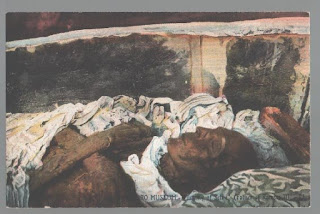 More than a half-century after Belzoni left Seti's tomb the great king's mummy turned up not in the Valley of the Kings but in a cliff tomb at Deir el Bahri. In the tomb with Seti was his son the great Ramses II and a who's who of the New Kingdoms greatest rulers. In this long undisturbed tomb, Seti rested in the entrance corridor in one of his original wood coffins which had had its face refashioned. Inside the kings, damaged mummy and original tattered wrappings were covered with a yellow shroud. When the shroud was pulled back Seti's remarkable noble disposition presented the face from his monuments with dignity not as a dead man but as a sleeping monarch.


In the late 1960's X-rays revealed an impressive Eye of Horus amulet under the wrappings of Seti's upper left arm. The thought occurred to me that Tutankhamun's mummy contained amulets created for not only Tutankhamun but also for Akhenaten and Smenkhkare. I wondered if the amulet had ever been removed from Seti’s wrappings, something I have long been against, but now I wonder if the amulet is inscribed and if it bears Seti's name or his son Ramses II, or his father Ramses I, or even perhaps a leftover from Horemheb's burial.

When the intact mummy of the 22nd Dynasty King Sheshonq II was found at Tanis in 1939 by Pierre Montet his mummy was wearing bracelets that were inscribed for the Pharaoh Sheshonq I but it is the nature of jewelry to be passed from one generation to the next but funerary amulets. With only Tutankhamun's mummy left undisturbed, it cannot be judged today if this mixture of names on the amulets surrounding the body of the king was unique to Tutankhamun or common practice in the New Kingdom.