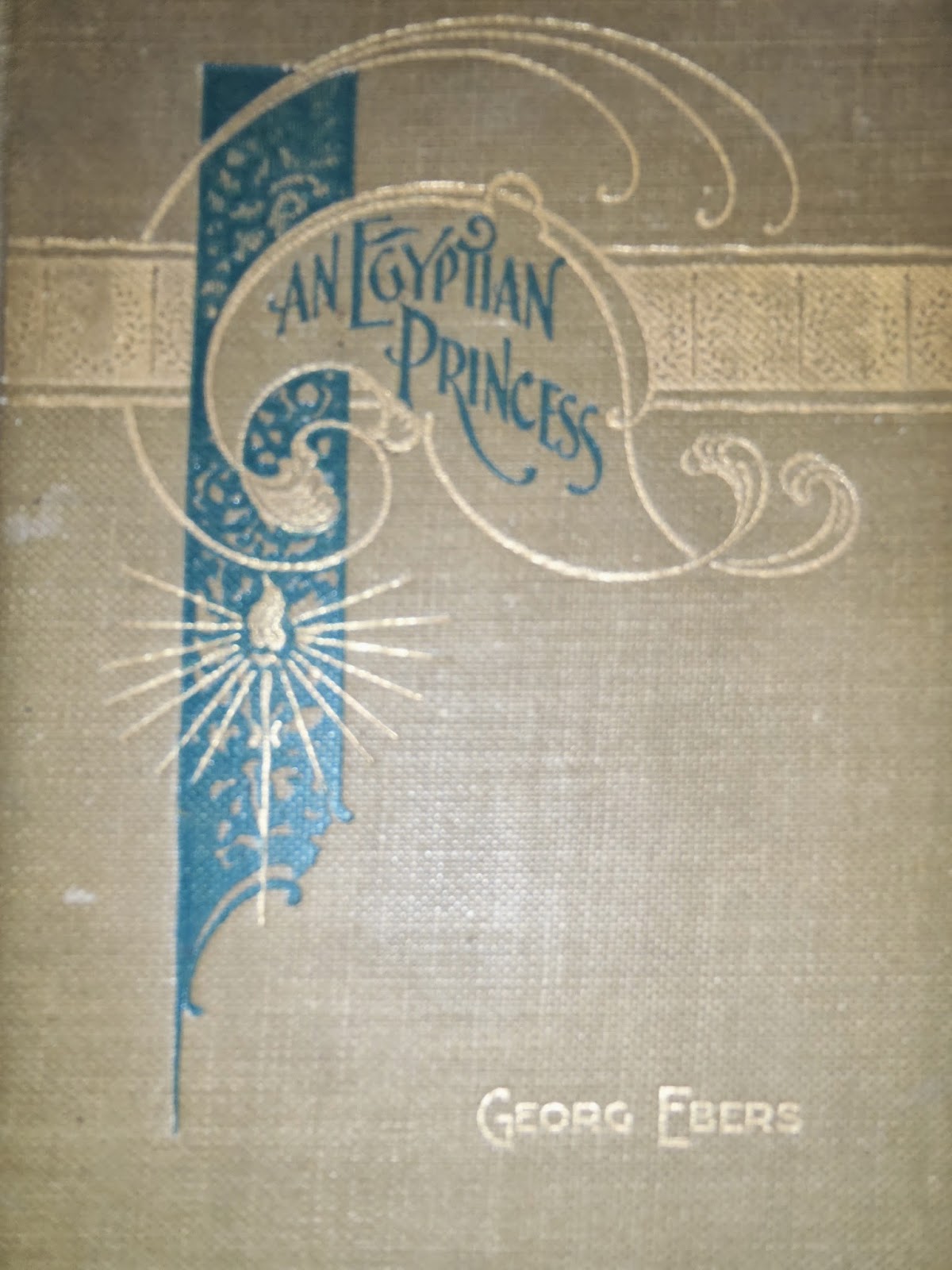 The late Georg Ebers was a celebrated Egyptologist and author from the second half of the 19th century whose works are known to contain references of archaeological discoveries of his time. Mr. Ebers is also well known today for an important medical papyrus from Egypt's New Kingdom period he discovered at Thebes, which bears his name, during the winter of 1873-74.


This 513-page book opens with a preface to the second German edition of corrections and improvements, including more recent discoveries of his day and a clarification of character names. The pages contain references at the bottom of the pages, often encompassing most of the page, these references while fascinating are a distraction from the main plot, making the book unsuitable for a child.


The book opens as guests arrive at the noblewoman Rhodopis house at the Greek city of Naukratis for a party. The guests are a mix of Mediterranean nobles one of whom has brought the words of an oracle while an Israelite had come to Egypt to buy chariots and horses for the governor of Judah.


After talk of sport and politics the Athenian Kallias announced that the Persians were on their way to Egypt in the form of an envoy to conclude an alliance with Pharaoh Amasis, and perhaps the Persian King Cambyses wishes the hand of Amasis' daughter, though there is some doubt among the guests as to the intentions of the Persian envoy. The party ends with a drunken insult of the hostess in remembrance of her youth as a slave by one of the guests but before the insult could be completed the guest was knocked out by another guest and carried away by his slaves.


Hurt by the insult the lady of the house wanders to the bed chamber of her granddaughter Sappho of whom Rhodopis is devoted. Days later a crowd gathers at the harbor at Sais including the Crown Prince Psamtik  and priests to welcome the ships of the Persians arrival.


The reader is present at a great banquet held by their jovial self -confident King Amasis with talk of events of the classical world in which they lived. Amasis and his heir are opposites as the king trusts his friends, Psamtik only sees the court vulnerabilities of his father’s generosity with a particular dislike of the Athenian Phanies, who Psamtik seeks to kill.


King Amasis to his queen and guests,


"There are but two days when a wife brings pleasure to her husband's life: The wedding-day, when hopes are bright, and the day he buries her out of sight.'" *


"Cease, cease," cried Ladice, stopping her ears; "that is too bad. Now, Persians, you can see what manner of man Amasis is. For the sake of a joke, he will laugh at those who hold precisely the same opinion as himself. There could not be a better husband ------"


"Nor a worse wife," laughed Amasis.

A friend Gyges hears plans to capture Phanes and rides a brisk two hours from Sais to Naukratis to let Phanes know that Rhodopis' house, where he is, is being surrounded by guards in an attempt to catch him by Psamtik's men. This action saves Phanes who manages to escape the house dressed as one of the Persian guests, though not his boat which had been discovered and sunk by his pursuers.


Early the following morning the handsome young Persian Prince, Bartja visits Rhodopis to inquire about the well-being of his friend Gyges, but before he could meet with Rhodopis he catches her granddaughter Sappho in the garden and falls in love with the innocent girl. Now about a quarter of my way through the book I have found a comfort zone in the style of writing of the author, the characters and the many fascinating archaeological notes that accompany the storyline.


The love story between Bartja and Sappho continues with the help of Sappho's nanny Melitta until quickly Bartja and Sappho's love finds approval of Bartja's father and Sappho's grandmother. First, however, Bartja and his father have to complete their mission to bring back King Amasis' daughter Princess Nitetis to Persia to marry King Cambyses.


After a long journey, Nitetis arrives at the Persian capital and is met outside the city walls by her prospective husband Cambyses, who is clad in magnificent clothes of gold, silver and purple cloth with yellow leather boots on top a great stallion. The young Nitetis is well liked by Cambyses his mother and younger sister, but there are those at the court that have it in for the Egyptian princess.


In her apartments among the hanging gardens, Nitetis becomes a member of the royal family learning how to be a Persian queen, and of her duties. Cambyses is at first jealous by the thought that his younger brother Bartja may hold Nitetis' heart but soon becomes relaxed in the faith of his and Nitetis' love for each other.


As Nitetis is fitting into her new life she receives a letter from home from her mother Queen Ladice, the letter is all doom and gloom particularly for Princess Tachot who has fallen gravely ill in love for Bartja, and awaits to see him again, vowing not to die before then. On the day of Cambyses birthday celebrations, the elements of evil take hold in the caretaker of the harem Boges who wishes to eliminate Nitetis by making her look unfaithful to Cambyses, who is hot-headed and easily led by Boges.


As I finish chapter XIX my antique copy heads into Chapter XXI with no chapter XX, Chapter XXI starts at page 299 to page 306, then it starts over to page 299 and moves through the complete chapter to chapter 22. I also realize that I have reread earlier parts of this book which I chalked up to losing my page, but now I am in doubt of that.

These factors have resulted in my setting this book, and review aside for the past year as I contemplated if or how I should finish and publish this review. In the end, I have decided that due to loss of context I should end the review here, but to publish just in case the entire print run was affected in this way. For those readers who have this book already, you can find what appears to be the missing chapter in a link below.

* Taken from the translations of F.W. Richter
1. PublicBookshelf.com
Posted by Timothy Reid at 1:09:00 PM