Animal Tombs in the Valley of the Kings 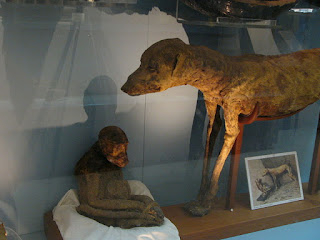 In 1906 archaeologist Edward Ayrton discovered and excavated three tombs in Egypt's "Valley of the Kings". When he entered tomb KV 50 he found a hot low ceiling shaft tomb with one chamber and two occupants facing off with each other, a mummified yellow dog and a mummified monkey. (1) The position of the two animals appeared to be an ancient joke?

The discovery of tomb 50 was quickly followed by another nearby tomb known as KV 51. After descending the shaft Ayrton found the tombs one chamber closed from the shaft with a door made up of stones and part of a coffin lid.

Within the chamber were a number of ducks, an ibis, three monkeys, and a baboon, one of which was wearing a blue faience bead necklace. The tomb also contained a canopic mask from among the debris.

In the same year, Ayrton found near tombs KV 50 & KV 51, tomb KV 52 with its lone occupant a mummified monkey but more interesting an empty canopic chest was also present.

The three tombs if notable for their occupants were decidedly unremarkable in importance in a valley where ancient pharaohs were buried. The occupants believed to have probably been pets from the time of Amenhotep II who's tomb KV 35 was near, if not Amenhotep's own pets.

The three tombs have since been regarded as animal tombs. The question must be asked if they at one time also contained human mummies.

The empty canopic chest in KV 52 speaks that the canopic jars or packages have been removed. This leaves a real possibility that a human mummy and its internal organs were removed from this tomb with the chest and the offering,(the monkey) left behind.

Monkeys, ducks and ibis' do not make good pets! You can feed ducks and admire them but at some point, they must be recognized as part of the food chain unlike the rest of the animals found in these three tombs.

An Ibis is not a pet you can only keep it by clipping its wings or a cage. A baboon, on the other hand, is a large very strong animal and like monkeys generally become highly aggressive to control their environment as they get older and provide a threat to their owners, as pets they are duds! 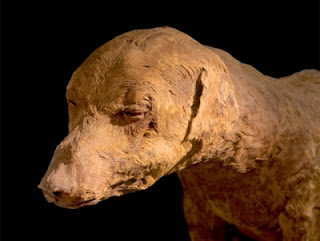 These mummies are not pets! The dog found in KV 50 on the other hand, is almost certainly a member of the royal family or of one its nobles.

What is our evidence that tombs 50, 51 and 52 are animal tombs and not the remnants of human burials? The importance of location to this king is to me suggestive that human mummies probably did occupy at least one of these tombs and that the burial was found intact and removed whole minus the canopic box left in 52.

The menagerie of occupants of tomb KV 51 on hand is sacred burials including the ibis and the baboon. The ducks may be offerings to either of them or both as may be the monkey's to the baboon while the canopic mask may actually have been for one of the apes in the tomb. 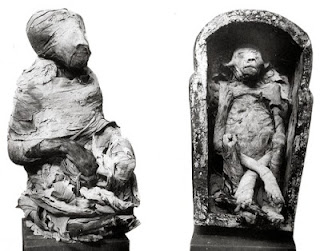 The coffin lid fragment introduced at the time of the tombs robbery/recycling? If there were occupants of tombs 50 or 52 then where did their mummies go?

When found the tomb of Amenhotep II contained a number of mummies introduced into that king's tomb during the reorganization of the Valley of the Kings during the 21rst dynasty but beside Prince Webensenu most of the remaining mummies are kings and have come from such tombs. The lady found in the side room with the kings off the burial chamber may also have come out of one of those kings tombs.

I suggest that tombs KV 50 and KV 52 may sadly be the reburial tombs of members of the Amarna royal family after the return to Thebes, the three members of that family found in chamber JC off the burial chamber of tomb KV 35. This, however, I find improbable for the mummy of Tiye as the evidence points elsewhere whether in tomb KV 55 that contained the mummy of Akhenaten/ Smenkhara and artifacts belonging to Tiye or the tomb in the western valley of Tiye's husband Amenhotep III KV 22 where there were also artifacts for Tiye. 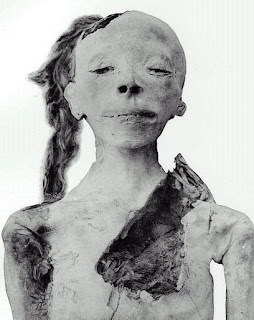 Could the boy found next to the mummy of Tiye in Amenhotep's tomb be the occupant of KV 50 or KV 52? When discovered at the end of the nineteenth century one of the boy's toes was found in another chamber in the tomb leaving the possibility that the boy has nothing to do with the ladies found lying on either side of his mummy? Could the dog and the monkey belong to this boy or is he the missing occupant of KV 52?

Could the other mummy in the same chamber known as the younger lady and now through DNA linked as being Tutankhamun's mother be the occupant of the other tomb. What power would the boy Tutankhamun have in his mother's reburial at Thebes especially if his mother had been one of the main proponents of the heresy?

In the tomb of Amenhotep II, (KV 35) there remains only the king's mummy and the two skeletons found in the well who are likely the remains of intruders into the tomb who fell into the well and were unable to escape.

The assumption that if mummies were removed from KV 50 and KV 52 they would have ended up in the cache of mummies found in tomb KV 35? I find that tomb KV 50 contained two pets of the family of Amenhotep II, the dog, and the monkey.

Because of the canopic box, I would believe that a member of the court, possibly the boy found in Amenhotep II's tomb was buried in tomb KV52 which was a simple burial that was later removed whole minus the chest and the monkey/offering? The shallow tomb would have made it easy to remove coffin and mummy from it?

A thousand possibilities exist for the purpose and history of these three tombs and their prestigious location among kings though they are unlikely to ever be anything other than animal burials during the reign of Amenhotep II. 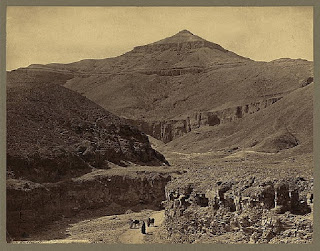 Photo of Dog: Secret of Animal Mummies in Cairo Museum

Photo Valley of the Kings: About Facts Net