Jewels of the Pharaohs 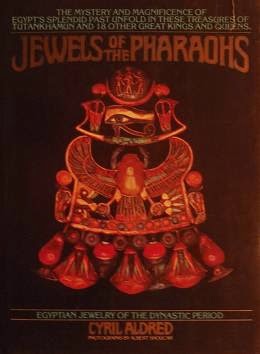 How have I had this book in my collection for so many years by the late great Cyril Aldred, and yet never read it? This nicely sized book is only 128 pages including many black and white pictures but most special because of its 128 pages there are 64 full pages of colored pictures of pharaonic jewelry depicted.


Mr. Aldred opens his book with a rundown of the great caches of pharaonic jewels discovered in the 19th and 20th centuries, including the jewels of the 17th dynasty Kings Wife Aahotep, jewels that founded Cairo's jewelry collection. From here the author is on to the materials used in ancient Egyptian jewelry, where various metals, stones, and minerals were found and the technologies employed in their use.


We are on to the goldsmiths, designers and various lapidaries and glass makers working the raw materials into shape. Mr. Aldred describes various important tombs of gold workers at Thebes, Memphis and Amarna and what their owner's positions would have entailed.


In chapter 5 Mr. Aldred delves deeper into the artisan's techniques including the effect of foreign influences upon the Egyptian craftsmen. We are being directed by Mr. Aldred to the colored pictures at the back to simplistically and effectively demonstrate his points.

For ease, I recommend two bookmarks as the colored pictures are vital to this book and you are going to want to flip to them often. Mr. Aldred's words into the forms Egyptian jewelry has taken over the ages with the excellent colored images is enlightening on the subject of ancient pharaonic royal adornments.


We are next on to the bio's of each jewel with it's known findspot, the discoverers, and even items which were stolen during excavation or before. Mr. Aldred starts off with the 1rst dynasty bracelets found on the arm recovered from the tomb of King Djer at Abydos by Flinders Petrie.


Unusual items include a gold fillet and necklace from a 4th dynasty princess at Giza and the apron of the early 12th dynasty Lady Senebtisi from Lisht. Certainly, the crowns kept in Cairo of Princess Khnumet cannot be overlooked on such a subject especially since one appears to have been made when the princess became queen.


My absolute favorite Egyptian jewel is the late 12th dynasty gold necklace of Queen Mereret found at Dashur near the pyramid of Sesosteris III. The goldsmiths of the royal court of this dynasty created in its jewels an epoch of quality workmanship to which very few pieces outside this period can measure up.


Queen Aahotep's jewels are a perfect example of this as the 17th dynasty queens ornaments are course and rude in comparison though there is one piece in her jewels that artistically rises above the rest. It is a gold scarab inlaid with lapis lazuli on a very attractive chain which was found on the queens now destroyed mummy employed as a heart scarab.


A century later the jewels of three wives of King Thutmosis III are a better lot in quality though they do not measure up to the work of the 12th dynasty goldsmiths. Still, they do poses charm with some notable pieces being the gold head cover of one of the queens as well as the only known belt for a woman surviving from ancient Egypt.


The treasure of these queens left Egypt in pieces and separated into a number of lots which were then combined with fakes. The jewels were skilfully restored by the Metropolitan Museum of New York where they are displayed today.


I am at this point struck by how the poorly preserved broad collar of King Smenkhkare found on the breast of the king's mummy in Valley of the Kings tomb KV 55 as well as many of Tutankhamun's gold pieces have tarnished and are made with low-quality gold. I cannot help but wonder if the goldsmiths were pinching the Amarna king's gold replacing some of it with lesser metals which would not have been apparent until long after burial?


The images of Tutankhamun's jewels show some very impressive works of art including plate 72 we find the rarely seen stole of the king a beauty, also within this same image is a most exquisite inlaid gold vulture on a rope. The king's earrings and studs pictured in plate 84 are also rarely published.


Mr. Aldred closes off his book with royal jewels up to Egypt's 22nd dynasty with one later exception. The book is something to be examined/savored for the comparisons of various era's workmanship is simply put forward.


Cyril Aldred has produced a book which is suitable for all ages as it is they will love the pictures but ages ten and up will feel the full effect of this fine book. Definitely "Jewels of the Pharaohs" is one of the best books I have read this year and a book I will revisit for reference in the years to come.