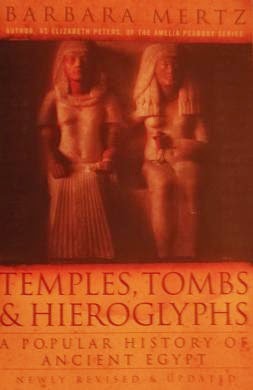 This is the second revised edition of this 1964 book by the well-respected author Barbara Mertz. This book starts out with the traditional format of the earliest cultures of Upper and Lower Egypt up to the earliest dynasties.


The author's story is well put forward with the basic highlights of the history of Egyptology, the great discoveries that today make up the science as we accept it, with of course personal variation. Into the earliest dynasties, the author confronts the mystery of why two tombs for the kings of the First Dynasty?


A question which would come up again in discoveries related to later dynasties. I found very interesting the observation of sealed Old Kingdom royal sarcophagi which when opened were empty including the sarcophagus of King Khufu's mother Hetepheres as well as the sarcophagus found by Zacharia Gnomein in the burial chamber of King Sekhemket at Saqqara.


The author retells the story of the tales told by King Khufu's three sons including the magician who folds the royal lake so that a bauble of one of kindly King Sneferu's court ladies may be retrieved. These tales also introduce the first three kings of Dynasty 5 as the sons of the sun God Re.


The author tells her tale through well-known discoveries leading up to the fall of the Old Kingdom and on into the First Intermediate Period to the kings of the Middle Kingdom. You may have noticed I have said nothing about the pictures as there is a section of colored pictures though nothing particularly unusual.


The author tells the story of the Hyksos kings and the last 17Th Dynasty princes of Thebes who rebelled against the overlords eventually saving the day for King Ahmosis I to found the 18Th Dynasty and ancient Egypt's period of empire. At this point, I have to wonder about the original version of this book.


The standard fair in front of me may have been neutralized by the revisions of the authors original work. Often the mistakes in an old book are part of its charm, the reader realizes there have been a few new discoveries since it's first publication.


In chapter 5 we find a more lively presentation on the reign of Hatshepsut and Thutmosis III. Ms. Mertz deals well with the questions which surround the female King Hatshepsut including succession and erasure of her memory by her stepson Thutmosis III.


Ms. Mertz continues with a rundown of the kings of the 18Th Dynasty which is a good layout though again quite unremarkable in content. The author moves quickly through King's Amenhotep II, Thutmosis IV and Amenhotep III on into the heresy of Amenhotep IV.


The author tells the story of the heretic Pharaoh Akhenaten including the erasure of the god Amen to the solar worship of the Aten by the king. The extraordinary art of the reign and it's development from the characteristic style portraiture of the kings early years and the more naturalistic style of the later years.


Ms. Mertz lays down the end of the 18Th Dynasty with the apparent disappearance of the daughters of Akhenaten by the reign of Horamheb who is believed to have married a sister of Nefertiti, though Nefertiti and her sister were not of royal blood, they were not rightful heiress' to the throne, unlike Akhenaten's daughters. We are mercifully walked through the early 19Th Dynasty including the reign of Ramesses II with all his propaganda and the acknowledgment that even before the end of his reign Egypt was in a period of decline and at the end of its empire.


The author tells us about the end of the 20Th Dynasty and the tale of Wenamon which demonstrates the loss of respect from Egypt's former conquered states of its lost empire. Certainly what may be considered one of ancient Egypt's most interesting periods must include this period of decline with the rise of the 21rst dynasty kings both with their intact tombs found by Pierre Montet at Tanis in 1939 and the pious works being done in the city of the dead by the ancient Priests of Amen, particularly it's priest-kings at Thebes.


Ms. Mertz tells a good recounting of the available knowledge of the late period and the decline of its greatness into the hands of foreign conquerors. This tale is told with the fine accuracy Ms. Mertz possesses on her subject. Unfortunately for me, I read this book a decade too late as I would have enjoyed it more as a novice on Egyptology.


I would definitely recommend this fine book for young readers or those new to the subject of ancient Egypt. Ms. Mertz strong and reliable words make "Temples, Tombs & Hieroglyphs" a solid standard on the subject!