Valley of the Kings: The Tombs and the Funerary Temples of Thebes West 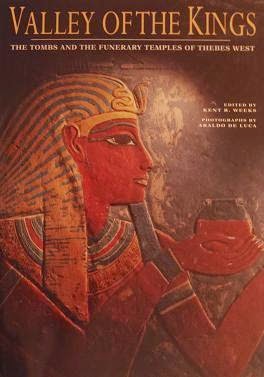 This book edited by Kent R. Weeks and with photographs by Araldo De Luca has 14 contributors who represent a who's who of Egyptology so much is expected from it. Right from the start, the first problem I have with the book is its mammoth size and weight making it difficult to read.


The book is filled with many beautiful images and informative schematics making the book easy to understand unfortunately by now you will have to adjust your reading position before the book crushes you under its weight.


After a chapter on the history of the exploration of Thebes and it's necropolis' the book heads into the "Temples of millions of years". These temples were built during ancient Egypt's New Kingdom as mortuary temples for the Pharaoh's of the 18th, 19th and 20th dynasty's.


The images that accompany the text are excellent and the information on some of the most important New Kingdom temples of millions of years is incredibly interesting and filled with lots of detail about these structures.


The chapter by Erik Hornung on funerary literature in the Valley of the Kings was excellent, unfortunately, however, the subject is so complicated that the chapter could have used the help of many more images.


The book next goes on to describe the individual Pharaoh's tombs in the valley but sadly the tombs of Thutmosis I, Hatshepsut, Thutmosis IV, Amenhotep III and the lesser Rammeside pharaoh's are not included in this section. Certainly, the tombs included were, for the most part, interesting particularly the under published tomb of Ramses II though with the plethora of books on King Tutankhamun's tomb I could have done without it, nothing new there.


The book next and interesting enough goes on to tombs in the Valley of the Queen's with a nice look at Nefertari's beautiful monument but no other queen's tomb. How I wish they had done tomb 51 that of Queen Isis mentioned in ancient tomb robbing papyrus' but instead, the book goes into brief descriptions of two princely tombs in the valley and that was it, hardly worth the mention of the queen's valley.


Next, it is on to the tombs of the nobles which are certainly interesting and well presented with much new information on a number of well-known tombs and of course the beautiful pictures by Mr. De Luca. All in all this book was a good read especially if you like an upper body workout at the same time.
Posted by Timothy Reid at 4:24:00 PM