Valley of the Golden Mummies 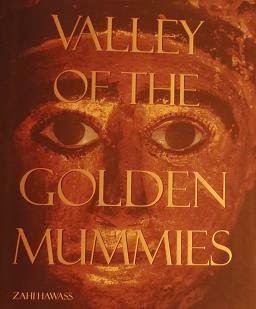 This large and picturesque book is by the head of Egypt's Supreme Council of Antiquities Dr. Zahi Hawass. The author opens his book with a record of his accomplishments and quickly show the stern showman has a sense of humor though I am glad his career as a diplomat was put on a back shelf.


The good doctor gives credit where it is due for the discovery of the Valley of the Golden Mummies that belonging to a guard and a donkey at the temple of Alexander the great in the Bahariya Oasis. The Valley of Golden Mummies is loaded with pictures which makes the read easy to understand and follow giving the book a much wider appeal to readers young and old.


The subject of the book is a Greco-Roman cemetery filled with beautifully gilded mummies I found especially touching the mummy of the boy found in tomb 54 and the mummy called the bride. The author puts the Bahariya oasis into a modern perspective which includes the welfare of its inhabitants.


I would have enjoyed more pictures of mummies in the mummification chapter which was nearly void of images of the chapter's subject. Dr. Hawass leaves the golden mummies relatively early in the book and spends the rest of the book talking about the region's monuments and Egypt's Gods.


The Valley of Golden Mummies was an entertaining read though I would have preferred more on the books title subject it was still worth a read with lots of information on some of Egypt's lesser known monuments.
Posted by Timothy Reid at 12:40:00 PM