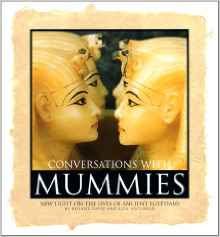 The book opens with the autopsy of mummy 1770 on the BBC in 1975 the mummy turned out to be controversial and to this day is used by some to suggest an error in carbon 14 dating. The book moves on to a short biography of the brilliant Dr. David and her mummy project.

Manchester's Egyptian collection can not be mentioned without a mention of the intact Middle Kingdom tomb of the two brothers and their unwrapping by Margaret Murray early in the last century. The two authors relate stories of different mummy autopsies in the United states, Canada and England including the use of CT scanners.

Among the many mummies studied comes the beautiful Djedmaatasankh from the Royal Ontario Museum who is cocooned in a beautiful case that comes from Egypt's 22nd Dynasty and cannot be opened without damaging the work of art.

The book moves on to the work being done on diseases in ancient and modern Egyptian populations with the help of the Manchester mummy tissue bank, a collection of Egyptian mummy tissue from as many as possible mummies in the world outside of Egypt. These samples are being used to track the evolution of diseases including malaria and Schistosomiasis.

The book was an excellent read and the science being done will no doubt advance our knowledge of the well-being of those ancient, modern and future lives. The contents are by no means a romantic read but if you like mummies and science this one is for you.
Posted by Timothy Reid at 12:54:00 PM