The Discovery of Ancient Egypt 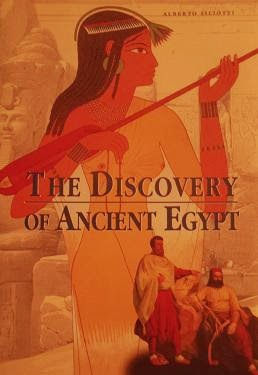 I realize it has been a while since I have last wrestled with a giant book designed to accent the modern invention of the coffee table. The weighty book is heavily illustrated with lovely drawings created by the early visitors to Egypt from ancient times up through the eighteenth and nineteenth centuries.


Many ancient Greek and Roman writers visited Egypt but it is without a doubt that among these it is Herotodus that most illuminates the ancient Egyptians before him. We are introduced to Egypt through the restrictions of the classical and early travelers who ventured the journey with most finding after the Arab conquest of AD 640 that only Alexandria and Cairo, the pyramids of Giza and the Saqqara necropolis were available to them to explore leaving the rest of the country to dangerous and restricted from Westerners.


A number of wonderful ancient maps and frescoes demonstrate the state of the art used by these various travelers. The reader is next onto the Middle Ages including the contribution of the Crusaders and those who attempted to decipher the long-lost meaning of the hieroglyphs with some clever falsities.


With the eighteenth century, we find travelers who venture to rediscover the lost civilization beginning with the French Jesuit Claude Sicard who relocated the ancient city of Thebes on his map of 1717. The author delves into the travelers Richard Pococke and Frederik Ludwig Norden who were in Egypt at the same time and traveling the same archaeological sites yet do not appear to have met.


While Mr. Pococke came with a trunk of gifts he presented to local dignitaries on his journey, Mr. Norden came with the gun in hand with the result being much better access was obtained by Mr. Pococke. I am loving this book with the many original drawings of the sites which accompanied these past authors publications including one of the colossus of Ramesses II from the Ramesseum intact, a half century before the Napoleonic expedition found it broken in two.


Illustrations from a number of eighteenth-century publications including some by artist Louis Francois Cassas display scenes of daily life in Cairo and Alexandria but also mix reality with the archaeological sites such as the pyramids and temples with elements of fantasy to romanticize the vision. From these works comes a beautiful painting of the obelisk of Senwosret I, at that time pictured surrounded by water and a garden.


With the close of the eighteenth century comes the great expedition of Napoleon to seize control of Egypt from the Mamaluke rulers. Along with the army came also the finest scientists and artists from the great learning institutions of France to study the landscape, the flora, fauna, minerals, rocks, people and of course the ancient monuments.


I particularly like the painting of Napoleon on horseback entering the Great Mosque of Cairo which was damaged by French artillery in an uprising in October of 1798. Napoleon's ambitions brought little in the way of success with the exception of the savants who did their jobs well under great duress bringing to France the documents needed to comprise the great volumes of "Description De L'Egypt".


A colored picture of the temple of Hermopolis is a testament to a monument that has now completely disappeared. Interesting is a painting of the pyramid of Meidum drawn by Vivant Denon who had to draw it using a telescope as he was unable to cross the Bahr Yussuf (canal), to get to it.


The books large pages are dominated by the images of Egypt of two hundred years ago with often very little writing. Rather the viewer is left to enter the scenes loosing oneself in the landscape and meeting the people who occupy that moment. The viewer now encounters the mortuary temple of Ramses III at Medinet Habu with its famous Migdol tower. The temple is in beautiful preservation or at least I know that because of how it looks today only here it is still half buried.


The reader is sadly met with images of the temple of Philae still with its paint that was washed off after 1902 with the building of the Aswan Dam. Truly "Description De L' Egypt" is a monumental record of the state of the Egyptian peoples, archaeological and natural sites at the turn of the nineteenth century creating a fitting foundation for the science of Egyptology.


Following the publications that resulted from the Napoleonic expedition, many European nations sent Consuls to Egypt to build collections of antiquities including men like Bernardino Drovetti and Jean Jacques Rifaud who left his name on a number of statues that ended up in the Museo Egizio, Turin. It has been a  long time since I found myself emerged in a book that I am enjoying so much that I am finding hard to put down.


Belzoni went on to open the pyramid of Khafra at Giza as well as the great temple at Abu Simbel. He also discovered in the Valley of Kings the tombs of Ramses I, Ay and his greatest find the tomb of Seti I. The explorer Frederic Cailliaud went farther afield than most of his contemporaries searching for the lost emerald mines of the Pharaohs and in doing so found and drew various temples including one at an ancient mining town at Gebel Sikeit. Mr. Caillaiud also reached Moroe in the Sudan discovering and recording its temples and pyramids at Gebel Barkal.


Little known explorer Girolamo Segato was first to enter the apartments below the Step Pyramid drawing the green faience tiles that decorated the walls therein. The Franco-Tuscan expedition headed by the man who deciphered the hieroglyphs Champollion was a complete success with the unfortunate stain on the expedition for damaging the tomb of Seti I by removing two walls now in Paris and Florence.


A wonderful watercolor of the second cataract painted at the end of 1828 by Nestor L'Hote is a rarely seen view of the Nile in any age. The man known as the founder of Egyptology in Great Britain John Gardner Wilkinson spent twelve years in Egypt producing numerous notes, drawings, a superb map of Thebes and was also responsible for numbering the tombs in the Valley of the Kings.


The reader is reminded again that many of the drawings and paintings presented are of monuments and scenes that have since been destroyed and no longer exist. These include a drawing from the Lepsius expedition which records the ruins of the famed labyrinth of Amenemhet III now completely gone.


A Dynasty XIX temple is pictured from the site of Gerf Hussein the temple, unfortunately, could not be saved from the rise of lake Nassar and now lies deep beneath. Many of the artists who visited Egypt depicted the various people who occupied the country in their style of dress, occupations, and festivals.


In Emile Prisse D'Avennes we again find a talented draftsman but in this character, we find the reliefs from the hall of the forefathers stolen by him in the middle of the night eighteen days before the Lepsius expedition arrived to collect them. A number of lesser-known artists also left contributions particularly architect Pascal Coste in his interest in the streets of Cairo and the Arabic architecture.


Traveler Luigi Mayer drew a couple of the Nilometers including a famous image of one in which the waters flowed into a granite sarcophagus known as the 'lovers fountain'. Robert Hay shared a tomb as a home with John Gardner Wilkinson while he explored and documented among other things the tombs in the Valley of Queens.


Famed explorer, Frederick Catherwood is known for his drawings of Mayan ruins in Central America also visited Egypt making many wonderful drawing including at least one of the now sunken temple of Gerf Hussein. All the drawings created by these past visitors to Egypt from for their own publications made for a clear connection for the reader to the past travelers immersed in those historic landscapes.


Yes, there were a lot of images of Abu Simbel but much more important are those images of what has been lost and stolen. Without a doubt, Alberto Siliotti has created a document here of earnest importance and a must read for everyone young and old interested in "The Discovery of Ancient Egypt".
Posted by Timothy Reid at 4:39:00 PM