Egyptian Art in the Fitzwilliam 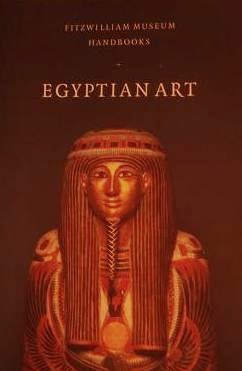 "Like most Egyptian art collections, much of the ancient material in the Fitzwilliam was assembled by purchase, bequest or gift, the main criteria being aesthetic and art historical merit. This distinguishes the Fitzwilliam from those museums where archaeology and social history have been the prime considerations."

The book opens with a glossary of the usual Egyptian deities leading straight into the documents first object of a middle Naqada II Period pot, 4000-3000 BC. The pottery vessel is in the shape of a hedgehog with a charming tilted face presented in a lovely full page colour photo with the objects information on its facing page.

The reader is presented with a group of objects found in the Hierakonpolis temple deposit in 1898. The objects having been buried in ancient times as the temple was renovated with many of the objects already a thousand years old at that time. Another group of simple elegant stone vessels from the early dynastic period exemplifies the development of the art to Dynasty II.

A cheery countenance emerges from the pages in the bust of a wooden statuette of a man from early Dynasty XII but it is the remains of a lady in wood from the same period on the following page that radiates luminosity and possible royal status. Of her statuette, all that the termites did not eat was her beautiful face, with inlaid eyes and one breast.

From Hatschepsut's mortuary temple at Deir el-Bahri the book provides a limestone fragment of the decoration of Hatschepsut's mother Queen Ahmose which in ancient times was altered perhaps according to fashion? The limestone seated statuette of Kerem and Abykhy is one of those great couple statuettes which almost always bare great charm.

A small bronze head of an Egyptian king wearing the blue crown is a rare survivor in the medium. The king represented is thought to be Amenhotep III, and though there are probably more representations of this New Kingdom ruler than almost any other there are few examples of any ruler in bronze from this period.

The well-known limestone relief block of the heretic king Akhenaten in jubilee robes is represented here beneath the rays of the Aten in the presence of bowing officials.* We are presented the many gifts given by the late notable R. G. Gayer-Anderson is a shelly limestone head of one of the heretic kings daughters which the head may have belonged to one of the kings city boundary stelae at Akhetaten.

A shawabti from the intact tomb of Sennedjem found late in the nineteenth century at Deir el Medina presents the viewer with an object from the lovely and at times harmonious burial furniture of craftsmen who worked in the Valley of Kings during the early XIX Dynasty. A small series of sketches on shards of pottery and flakes of limestone reveal the art of the sketch free of the conventions strictly upheld in more formalized works.

Perhaps the Fitzwilliam's most famous Egyptian piece is the sarcophagus lid of the great Dynasty XX King Rameses III from Egypt's Valley of Kings now presented standing upright. This major fragment of the lid was separated from its box in the Louvre early in the nineteenth century.

The Dynasty XXII cartonnage coffin of Nekhtefmut is another splendid example of this style of an anthropomorphic envelope made with linen soaked with resin, covered in plaster and elaborately painted. Nekhtefmut is however not present as his mummy was removed after its discovery below the Ramesseum, the mortuary temple of Ramses II.

A lovely selection of Late Period bronzes meet the viewers eyes with pieces of exceptional quality though it is within the sweetness and quality that a charming little steatite figure of a votive statuette with the image of the god Ptah stands out.

"The worshipper is shown proffering a shrine with the image of the god Ptah in high relief. The man rests his hands and chin on the top of the shrine. He wears a bag wig, an introduction of the Late Period, and he is shown with very large hooded eyes, fleshy cheeks and finely modeled nose and mouth."

A small Ptolemaic Period naked woman made of Egyptian blue possess great dignity within her nakedness. This viewer feels her smooth, tactile surface and cannot help admire the little figures modelling. From the late Ptolemaic Period the reader is presented with a wood statue of the goddess Tawret. The goddess associated with Hathor was a protector of  pregnant women and children.

The Fitzwilliam possesses one of the rare Roman Period mummies known as "red mummies" of which the British Museums is likely the most famous. Here we have a mummy painted red with gold figures and a head containing a fine portrait of a man. Gone are the days of the sophisticated envelopes produced in Dynasty XXII as represented by the coffin of Nekhtefmut on this books cover. By Roman times the envelope is replaced by a rather crude bundle of unsophisticated workmanship inset with the better portrait than those idealized envelopes from a thousand years earlier.

So much of the material presented here was deserving of many volumes such as the temple deposit of Hieronkonpolis but for me, it is with the pottery hedgehog vessel with a twisted head that bears stature with any of the more schooled objects that I find myself in front of a work of art demonstrative for arts sake. The Fitzwilliam is one of the world's great art institutions who's collection of Egyptian art could only be grazed by such a booklet.

The selected works refine the viewers eye to objects and representations which are classic to each period in the vast expanse of time that encompasses these standards. The guide creates an effective representative development of important works from the Fitzwilliam of ancient "Egyptian Art".

* The Jubilee Scene in the Fitzwilliam