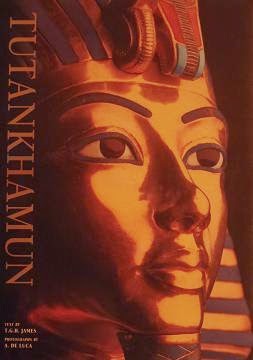 Here I go into my third coffee table book in a row and worse yet it is on our old glittering friend Tutankhamun. The books pictures are the main highlight of the book being by photographer Aldo De Luca and of course Harry Burton!


The book opens with a series of close up photo's of King Tutankhamun's shiny stuff including the back of the kings mask. The author explores the historical times Tutankhamun was born into and ruled with the help of his senior ministers.


It is left to this boy of nine or ten years of age to repair the damage inflicted on Egypt and her empire by his predecessor Akhenaten. The viewer is presented with an image from Tutankhamun's throne which shows his Queen Ankhesenamun applying ointment to the king, yet it can clearly be seen in the image that the figure of the queen has been altered from her collar up and of which the shadow of a potential sleeve also appears behind her extended right arm.


The Amarna heresy dominated Tutankhamun's life, reign, and memory though the boy king could hardly have played any meaningful part in his ancestors cult or in much of the reconstruction of Egypt after the heresy. The discovery of the tomb brought world fame to its discoverer and the little-known boy pharaoh.


There are a number of wonderful old excavation photographs included as well along with the many expected usual photos by excavation photographer Harry Burton. The search for the tomb between 1917 and 1922 was thorough if not exhaustive with a total of eight months on the ground work in those years.


A classic Harry Burton photograph of the cord and clay sealing used to seal the second shrine is now presented on a full two-page spread opening up to reveal a four-page drawing of the tomb and its chambers full of the king's belongings. Our author now turns to the tombs contents beginning with the kings four gilded shrines. The largest of which fit so snug into the burial chamber that it could not have been made until after the king's death when the size of the burial chamber was known.


The reader is next presented with the coffins of Tutankhamun including the second coffin which has an intricate inlaid feather design and someone else's face on it. Aldo De Luca's photographs are beautiful with many diverting away from the standard view presented in most other books on this little-known subject.


The many wonderful photographs also make this book a fine read for a teen or younger. I particularly like all the pictures of Tutankhamun's alabaster canopic chest, likely an object not originally made for Tutankhamun but usurped for his burial.


Mr.James presents perhaps the most wonderful display of Tutankhamun's shabti's that I have seen in such a publication before. They range in material from wood to stone to faience and in a great variety of wigs, crowns and implements with some even appearing to be female.


The three mysterious gilded couches found in the antechamber contain inscriptions that they were made for the dead Tutankhamun but otherwise are of unknown funerary use. We are next on to the many anthropomorphic deities found in black shrines in the treasury with perhaps one of the most unusual being the black coated figures of a boy carrying a gilded sistrum believed to be Hathor's son Ihy.


In the next section, we are dealing with the various amulets found on the mummy and around the tomb. Among which a number of them were cut out of sheet gold, chased and found particularly at the throat of the kings mummy including five gold vultures, two being present here.


Found near the navel of the kings mummy was an unusual scarab made of resin inlaid with the design of a benu bird with lapis-lazuli and colored glass. The tombs life size sentinel figures are beautiful representing the king and his double known as his ka while other statuettes from the tomb inscribed for the king are most certainly representing a woman and not originally made for Tutankhamun.


Containing none of the traditional crowns worn by pharaohs the tomb did contain a small assortment of royal regalia including a number of crooks and flails and at least one scepter. Tutankhamun's jewelry was mostly stolen in ancient times leaving the bulk of remaining jewels within his wrappings with only a few sumptuous jewels overlooked in a few boxes mostly in the treasury.


Among the contents of one of these boxes was a necklace known as the "necklace of the rising sun" with its pectoral of two baboons with moon disks on their heads surrounding the Khepri beetle who pushes the sun before it. The pectoral being one of the finest quality pieces of jewelry in the tomb.


An extensive series of Tutankhamun's jewels from various rooms in the tomb are presented and include many necklaces, pendant, pectorals and four sets of earrings which were found in a box from the treasury shaped as a cartouche containing the king's name. The book displays all four sets including one pair that is rarely seen in publication.


The rarely seen carnelian bird on a gold bangle is so unlike the rest of the kings jewels that it left me wondering if the piece might have been an antique in Tutankhamun's day as it looks much older in style even slightly Archaic. Seven gold plaques found in the tomb are of openwork design and regarded as buckles though they are too fragile to be used as such. Four of these objects are represented here and all have damage to their light construction.


Tutankhamun's gold mummy bands which were wrapped around the outside of the kings mummy are inlaid with glass inscriptions giving the kings names and titles. Three more bands but regarded as trappings of the mummy are heavily decorated in glass and are nothing short of stunning and though the original owners cartouches have been erased it can still be seen that the missing name is "Neferneferuaten".


It is here that we leave the jewelry and move on to the kings personal possessions that of course includes his writing equipment, games, and musical instruments one of which possess an inscription naming his grandmother and another his oldest sister. A number of openwork shields are present and too fragile for use left me wondering if they were perhaps meant to be decorations.


Both daggers found on the mummy are present including one with an iron blade made hundreds of years before Egypt entered the Iron Age and the gold dagger which must be one of the world's most traveled artifacts. The kings traveling canopy left me wondering if the decorative shields might have belonged to it but it is the many calcite vessels that for me may demonstrate a group of artisans particularly attuned to delighting the child pharaoh and his young queen.


With so many books on this subject, the reader has the opportunity to appreciate so many noticeable volumes though rarely with such in-depth images. I enjoyed this book which remained uncomplicated throughout and would put it on my coffee table for my guests to enjoy but most of all for the kids to look through and to form their own impressions on this ancient Egyptian art created for the child Pharaoh Tutankhamun.