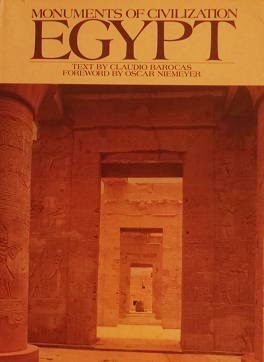 The book opens with a forward by Oscar Niemeyer who writes a brief note on the architecture of ancient Egypt including its pyramids and temples. Mr. Niemeyer leaves the reader with among the questions, why do we not build pyramids today?


In the Introduction the reader is introduced to the environment of the Nile and the two distinct lands that make-up Egypt. Around 3100 B.C., the King of Upper Egypt Narmer gained control over Lower Egypt becoming Egypt's first King of Upper and Lower Egypt.


The author delves into the meaning of the pyramids beginning with the Step Pyramid, the constructed workforce and the masons who built it. The author includes a sidebar of ancient texts on some pages along with some interesting photographs of the pyramids.


"We can safely assume that, with the Third Dynasty, royal power already had a most solid foundation. The more than 40,000 stone vases deposited in the subterranean storehouses are enough to convince us of this; they were filled with the produce of the earth, another indication of the enormous accumulation of goods available at that period."


With the Fourth Dynasty pyramids, we find the grand edifices of Egyptian history constructed without decoration by kings who's divinity was without question. The king was surrounded by a highly effective bureaucracy funneling the states resources to his divine use.


With the mortuary temple on the east face of the Giza pyramid of Khafra, we find the only well-preserved temple of the Old Kingdom created with monolithic granite pillars and architraves weighing many tons and completely unadorned by decoration or inscription. The pages are filled with images of the beautiful tomb of Ti which is likely to be considered the finest of its kind of the Old Kingdom.


The sideline texts include a theological text from Memphis as well as passages from the Pyramid texts and a Decree of a Fifth Dynasty king. The collapse of the Old Kingdom had been partially brought to an end by local nomarchs who could muster local armies challenging the powers of the kings of the Memphite Sixth Dynasty.


The Middle Kingdom kings of the Theban Twelfth Dynasty got around this issue by appointing middle-class bureaucrats to various government posts circumventing the ruling class. These kings also set about building dams and canals in a highly effective agricultural reclamation in the Fayum district. They also began expansionist policies sending military expeditions both to the south and into the Levant in the north.


This had the effect of removing the nomarchs of their private armies in the missions of the state. The surviving temples and monuments of the Middle Kingdom are few with the badly damaged mortuary temple of Mentuhotep II or III as regarded by our author and the calcite shrine of Sesostris I which was hidden in the third pylon at Karnak being exceptions.


The loss of these Middle Kingdom monuments was heavily due to the Theban kings of the Eighteenth Dynasty that followed a few hundred years later. A period of domination of Lower Egypt by foreign rulers known as Hyksos ended the Middle Kingdom with the kings of Thebes retaining control over Upper Egypt.


The last kings of Thebes Seventeenth Dynasty fought and chased the Hyksos out of Egypt reestablishing unified Egypt under King Ahmosis. This founder of the Eighteenth Dynasty was followed by a line of some of Egypt's greatest kings who founded the period of her greatest empire resulting in these king's becoming fabulously wealthy emperors.


Images of the architectural wonders of Thebes now occupy the pages including the Colossi of Memnon. The reader is now introduced to the burial places of these rulers in the Valley of Kings beginning with the mortuary temple of Hatschepsut at Deir el-Bahri and her tomb hidden on the other side of the cliffs in the valley behind.


Regrettably, at this point, a series of small mistakes appear including image number 44 which is a picture from the tomb of Menna and is described as being of the king yet it is actually the defaced image of Menna hunting in the marshes. Similarly, in image 46 we find the funeral procession painted on the wall in the tomb of Ramose is said to be for the king when in reality the funeral is for Ramose.


Mr. Barocas is next onto the absence of sacrifices in Egyptian religion compared to other ancient cultures who conduct this behavior on altars in front of their temples. Here we find the Egyptian kings making offerings to the gods on altars inside the temples of their gods.


"The fact that in the Egyptian religion the function of sacrifice is replaced by offerings is most important. It suggests that there existed an almost qualitative distance between divinity and the human condition, a gap in which the offerings were little more than a passive link rather than an active and vital agent in the relationship."


The large colored pictures which occupy many of the pages make the read uncomplicated though the sideline texts possess a little more of a challenge to textually appreciate. The layout of the great Karnak and Luxor temple complex is rooted in the foundation of Middle Kingdom temples built around by the Eighteenth Dynasty kings Thutmosis I, Hatshepsut, Thutmosis III, and Amenhotep III.


These building projects were not asymmetrical but based upon the needs of the gods according to the reigning king and as blank sheets for the kings deeds to be recorded and his name to be remembered. Again I find picture number 82 mislabeled as being an image from the tomb of Ramesses I when in fact it is from the tomb of Thutmosis III.


The rise of the Nineteenth Dynasty brings with it among others the colossal King Ramesses II who like his father followed the activities of Amenhotep III in adding to both Karnak and Luxor colossal structures that did not interfere with much of the earlier monuments except when the older monument was being expanded. A number of images from the tombs of the great Ramesses Queen Nefertari, and his children occupy most of the pages in the remainder of this section.


Mr. Barocas leads the viewer next to the temples outside Thebes created by kings Seti I and his son Ramesses II including their temples at Abydos. Again in images 91-94, we find 3 images from the tomb of Pashedu which depict the deceased owner described as being "the king". The same is true of image 91 which famously depicts Anubis bending over a mummy from a tomb at Deir El-Medina described in the book as the being the king, quite an elevation for the workman Sennedjem!


The author now heads into the Ptolemaic Period and its beautifully preserved temples, the dynasties Alexandrian base and survival of many papyrus documents from the era. In the Appendices the author breaks down the history of archaeology in Egypt from ancient times and tourists to merchants and scholars.


Clearly, the editor knew little to nothing of Egyptian art and as a result did a really crappy job on this book, and if I was the author I would have been pissed. Our author, on the other hand, put forward a unique approach to Egyptian history which kept my interest all the way through.

I have at the top made it clear the edition I have just read hoping that since 1977 the editorial mistakes were corrected. I recommend this read but would not give this edition as a gift especially to a child.