The Great Pyramid its Construction, Symbolism and Chronology 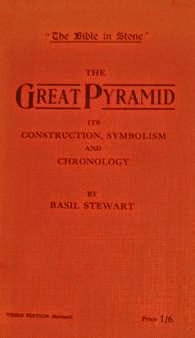 This short 55-page document is yet another in the theory of the great pyramid being a creation of divine inspiration. My copy is the third edition from 1931 written by Basil Stewart and a brief on his larger work "Witness of the Great Pyramid".

The author contends that the pyramid was never meant to be a tomb for a king but purely a bible in stone meant to enlighten mankind. The author is knowledgeable about Egyptian pyramids though unfortunately puts forward the idea that its message was particularly meant to be read by the British race whom Mr. Stewart puts forward as the closest race to the builders of the monument.

Again the theory that the measurement and astronomical alignments are telling a message of world history is put forward though I must say the measurement presented in one of the diagrams of the "Kings chamber" seems to show that history came to an end on August 20, 1953.

The Queens chamber in the pyramid is once again referred to as the Jews chamber because its shafts were covered over representing the blindness of the Jews who on judgment day would have their eyes opened to Christ the savior. As much as this offends me the author is not the only perpetrator of this idea it seemed to belong to the theory.

The last chapter talks of the pyramids missing capstone and its significance in the absence of the savior being the capstone of humanity. It is only explained at the end of the document that August 20, 1953, date represents the Armageddon and that 48 years later in 2001 Christ will reappear at the start of the newly cleansed earth.

I must have missed this event, that's bad but not as bad as the theory in this book and I would avoid reading this book if it were not already too late for me.
Posted by Timothy Reid at 10:38:00 PM