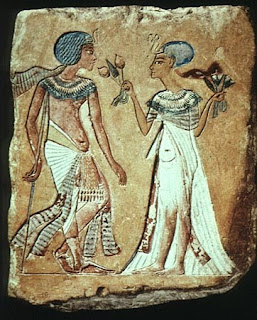 This 9" tall limestone sunk relief block in Berlin's Neues Museum pertains to show Smenkhkare and Merytaten or even Tutankhamun and Ankhesanamun, no real way of ever knowing who these people are except that they are Egyptian royals from the Amarna period.

Cyril Aldred in his 1973 book Akhenaten and Nefertiti also says of the block that the "back has been worked smooth; a channel with shallow slots at intervals has been cut along the left-hand edge." Some believe the scene was meant to be inserted with mud into a home shrine, but if this were so the worked back and the channel would be unseen to the viewer and pointless waste of energy.

The king portrayed has been praised by many experts for his flowing appearance while she has all the charm of a clothes store manikin. This makes me wonder if in fact there were two sculptors involved in the execution of, with an experienced carver responsible for the king and a student for the stiff two-dimensional queen. A number of elements are simply painted on and not engraved including both collars, the ribbon at the back of the queen's head and a number of decorative elements in their costumes.

More than 3000 years of wear has been kind to this piece as it is one of the best-preserved examples of the period. Of the paint condition, it must be noted that the wear seems selective including under the king's chin, but not including the king's chin. The loss of color to the queen's crown appears to be the result of careful sanding which has left horizontal scratches exclusively on the blue crown but not the area surrounding the crown.

The excellent preservation has been suggested to be because it laid in a house (R 45), and became buried in sand at Tell el-Amarna where it is said to have been discovered in 1899. To my knowledge, there is no proof of its discovery just an appropriate story.

Interesting enough that there are two more identical scenes in the famous Mansoor collection (listed on their website as # 37, 38), only in raised relief and without color. The largest of the three is number 38 in the Mansoor collection being 13" tall. The king on this image is not resting on his stick but actually falling over on to the queen who seems to be pulling back to get out of his way.

Certainly, there are trust issues between these two.

The Mansoor collection is highly suspect and considered by many including myself to be soulless forgeries, though their collector M. A. Mansoor was a respected Cairo antique dealer who established his business in 1904, five years after the purported discovery of the Berlin couple. Unfortunately I have found no information on when it came to Berlin and who collected it or who sold it whether it came from Mr.Mansoor's shop after 1904 or whether the piece actually precedes the Mansoor collection, either way, it is clear from my eye part of the same body of work as the questionable Mansoor sculptures and I would definitely place it in the earlier sculptures from the studio in which the Mansoor collection was created.

Finally on the Mansoor collections website is #39 a raised relief of two Amarna princess' which is a total copy of a famous fresco found at Amarna in 1891 by the great Flinders Petrie, which inevitably relates that piece # 39 could not have been carved before 1891 at least not in modern times. In ancient times the fresco of the princess' was inside the royal palace and probably not visible to most of the population of Akhetaten, and unlikely the surviving part of the fresco just happened to be the part carved in the Mansoor block # 39.

As it will be noticed I do not believe in the authenticity of the Mansoor collection or the piece in the Neues museum but certainly believe the Neues museum piece is instead an earlier piece from this studio sold perhaps to test the market as to the viability of selling the works of this forger dealing in expensive Amarna period royal collectibles.

A successful man such as M. A. Mansoor was more than likely a forger's studios biggest victim but unlikely to have been a knowing participant as he would have been risking his reputation as an antique dealer and doubt in the pieces from him may account for him holding back the collection while he sold other antiques from different periods.

In the piece in the Neues museum I detected the hand of a teacher and a student, unknown if the seller is one of these two or a third representing the artist's works for sale as decades later no information has come forward as to the identity of the studio which because of this to me may represent not an artist's studio of unrelated participants which are more likely to talk about their operations but a family of forgers who created these works on behalf of the family to supply the wealthy collectors of the day, taking the secret of their operations with them to their graves for the better of the family?

I suspect that this panel is indeed probably a fake. I'm less inclined to write off the Mansoor collection though. Some of the items are suspicous, but that doesn't mean they are all fakes. It could very easily be a mixture of genuine items spiced up with some fakes. After all, many museums also have fakes in their collections. Indeed, there is a very similar (unpainted) relief in the Mansoor collection.

What we can say though is that whoever painted these reliefs had seen genuine Amarna reliefs or had access to pictures of artefacts from Tutankhamun's tomb - which is why provenance is crucial. We need to know whether these articles surfaced before pictures of articles from KV62 were published.

For instance, while depicting Smenkhare using a stick seems authentic to us now, prior to 192x, it would have been unexpected.

If the reliefs are fake, my suspicion is that they are near copies of real artefacts which are presently missing, perhaps stolen and lying in private collections. Even if they are fakes, they may still be very important items.

Though nothing else in the collection does it for me. The thought that these sculpture really look like the grotesque figures from the Gem pa-aten at Karnak, or the early period of Amarna art.

While the supposed context of the Mansoor pieces is an artists studio at Akhetaten. Wouldn't that more than likely make these pieces as coming from the middle or even late period of the art from Amarna.

Certainly many of the pieces are meant to look similar to the pieces found in the studio of Thutmose but lacking softness. The princess' are depicted yes but in the Mansoor collection I see nothing endearing in them they are instead strange alien looking creatures.

One can see in the Mansoor collection a stylistic trend toward the Sumerian even Cretan examples of pieces that may date after the time of Ankhetaten complete with the enigmatic smile. this would point to a sculptor who, possibly influenced by that style, may have forged the pieces from the finds in the early part of the 20th century. It is more probable that M. Mansoor was duped by these fakes since he was certainly a very respectable dealer?

I would agree they do have a Sumerian look to them and totally agree that M. Mansoor was duped but he held on to them and the descendents of Mr. Mansoor have nothing to loose by trying to sell incredibly valuable/valueless objects and hope for the best.

For me though they are glorified door stoppers.