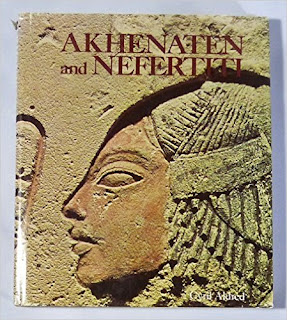 This 1973 book is by the late Egyptologist Cyril Aldred for the Brooklyn museums 150 year anniversary. Though I must say the late Mr. Aldred's last book I read was his 1968 "Akhenaten Pharaoh of Egypt" and was surely one of the classics of Egyptology so this book was almost certainly good but could it live up to Akhenaten.


The very knowledgeable Mr. Aldred clearly understood the art of the Amarna period with the subtleties of the period. The book opens with a description of the Amarna revolution and a historical outline of the period leading into the building program of King Akhenaten and his Queen Nefertiti.


Mr. Aldred than very helpfully discusses the periods of art within the revolution breaking the art of the reign into an early, middle and later phases. This first half of the book ends with an overview of the iconography and character of the art of the heretics reign.


The earlier mention of the phases of Amarna art into early, middle and late periods becomes extremely useful in the second half of the book, the catalog which has its objects presented in this order beginning with the art of the early revolution with its exaggerated style which softens as the reign progress'.


The catalog is truly one of the most remarkable of Amarna art I have seen ending with a number of shawabti from the royal tomb. Particularly interesting and beautiful are the talatats from the Metropolitan Museum of Art from the collection of Norbert Schimmel.


Another fantastic book by the great Cyril Aldred keeping in mind it is one thing to read a book and another to study it. This book is worth spending serious time looking at particularly if you wish to know about the art of Akhenaten and Nefertiti.
Posted by Timothy Reid at 11:49:00 PM

Thank you for reminding us of Aldred's books and his intelligent presentation of the ever exciting works from Ankhenaton's artists. Many of these pieces have recently become the center of an ongoing dispute. Many are now not on display and it is Alrdred's scholarly description, in this publication, of each detail, along with his uncanny esthetic insight, that records the art pieces for everyone to see. He may be the only one who has contemplated so deeply the inner thinking of these mysterious characters through the work of artists of the time. Outstanding are the photos of some of the "life masks" from Borchardt's finds in the Sculptor's Studio in Amarna. The astounding countenance of Ankhenaton, in plate no. 95, pg. 167, reveals the visionary face of the author of the "Hymn to the Aten" in vivid terms. For anyone who has not read this book, go, get it asap. Best, s