The Boat Beneath the Pyramid 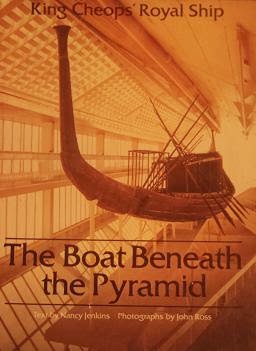 This attractive book is filled with many images about pyramids of the Old Kingdom and the boat pits that accompany them including the subject of the book the boat found and restored by the genius of Ahmed Youssef Moustafa and now displayed in its museum next to the great pyramid at Giza built by King Khufu.


The book opens with a rundown of the pyramid age and its kings, the cleaning of the debris on the southern side of the great pyramid and the discovery in 1954 of the two boat pits there found. One can only be impressed by the sheer intimidation of the project of restoring the great ship and the amazing work done by Egyptian authorities including the antiquities authorities chief chemist the late Dr. Iskander and the credentials of the ships restorer Hag Moustafa.


The task of just excavating the boat from its pit must have been arduous enough the five times and ten years it took to finally figure out this ancient jigsaw puzzle was surely a pinnacle of accomplishments for the restorers and the antiquities service. Very interesting and previously unknown to me were the ten marks in inverted pyramids found on the south wall of the boat pit.


In the final chapters, the author talks about ships and ship building which of course includes a lot of interesting pictures of beautiful ships with the best pictures being of Khufu's ship during its excavation and after reconstruction. The author also discusses the concept of death in Pharaonic Egypt and the role of the gods and boats within the ancient religion.


The conclusion is uncertain with the exception that the boat is an immensely important object that needs to be properly cared for or the ship which survived for 45 centuries can easily be lost.