The Life and Times of Akhnaton 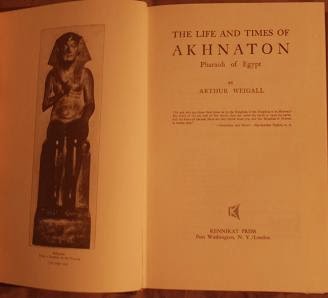 This book originally published in 1910 was updated in 1922 by its author the late famous Egyptologist Arthur Weigall. The book opens with Mr. Weigall's 1922 preface in which he discusses the discovery of tomb 55 in the Valley of kings and the authors belief that the occupant found in the tomb was indeed the Pharaoh Akhnaton.


Mr. Weigall has a good argument of the identity of this mummy as he was the government inspector who oversaw the clearance of the contents of KV55. The author then goes on to a quick run down of the founding of the XVIII Dynasty leading up to Thutmosis IV and the introduction of the Aton in this reign.


From there the author moves on to an interesting examination of the art of the period and its connection with early dynastic styles as well as the influence of the young Kings Mother Queen Tiye over her son's early reign and the development of the religion of the Aton. As interesting as this is the suggestions of Mr. Weigall of the developments of the ensuing battle with the priesthood of Amen are from a highly enlightened man and reasonable.


The developments that were taking place during the kings 10th to 12 years of his reign including the great hymn to the Aton, as well as other accompanying hymns are made suitable for the decorating the tombs of the nobles and the prominent role played by Queen Nefertiti are discussed. Mr. Weigall's view of Akhnaton is that of a sickly gentle enlightened home body who completely in his pacifist ideals sacrificed his empire for his beliefs. The book culminates with the sad downfall of the visionary Pharaoh leading to his death.


In the last chapter, Mr. Weigall finishes his description of the events and the many opening and closings of tomb 55 in the Valley of kings. The authors view in this matter are some of a most fascinating read of the book.


The life and times of Akhnaton by Arthur Weigall was fascinating and recommend it for people who may or may not be interested in ancient Egypt.
Posted by Timothy Reid at 11:39:00 AM

I needed to post you one bit of remark to say thanks as before for your personal pleasing concepts you have featured on this page. It was certainly pretty open-handed with people like you to give unreservedly all that many of us could have distributed as an electronic book to end up making some cash on their own, most importantly considering that you might well have tried it in the event you considered necessary. These basics likewise served to become a easy way to understand that many people have the same fervor much like my personal own to understand way more in respect of this issue. I'm certain there are a lot more pleasant instances ahead for those who read carefully your site.