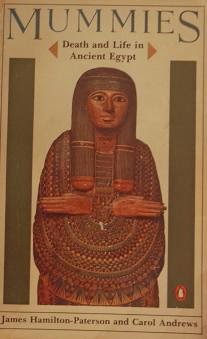 I found a bookmark about a third of the way through this book apparently forgot I was reading it, I wish I could say it was the first time this happened. The introduction was capable. In Chapter I, we find the author telling the reader about the typography, climate and people in the Nile valley. The author recounts the various animal cults going on to say


"The Greeks' name for the Furies who hounded people mercilessly was the "Eumenides" or the 'favorably disposed ones', and they named the Black Sea- infamous for its violent storms-the "Euxine" or 'good to strangers".


I have no idea what this has to do with Anubis, the jackal-headed god of embalming? Directly below the author goes on to say:


"But such a theory would not explain what the Egyptians found sacred about a frog or a baboon." ?


The authors are next on to the king including his position in keeping Egypt in a state of Maat, a perfect harmony and if this harmony was not met the king alone was to be blamed of course there would always have been enough blame to go around. This Maat in the Old Kingdom good or bad was probably symbolic reaffirmation of the god-kings power and wrath where only the king had an afterlife.


The book is next on to mummification with a well-written overview of the evolution of techniques including Herodotus' words on the subject. The goal was to reproduce the natural actions of burial in the Egyptian desert which over time led to more and more sophisticated burials including the theology of burial itself.


Interesting enough the authors relates Mr. Mathey's french account of the unwrapping of the mummy of unknown man "E" in June 1886 which he was present for:


"Once the bandages had been stripped off we found the mummy was encased in a sort of whitish material rather like dough which was extremely caustic and covered the body from head to toe" "At this moment we all had to overcome a release of noxious gasses which had been trapped inside,".


The chapter is well supplied with images in black and white of seven human mummies and a number of animals also. In chapter 3 we are on to funerary equipment dealing with everything from pyramids on down to boats including the evolution of objects over time,  the limestone servant statuettes of the Old Kingdom to the much more varied wooden models of the Middle Kingdom where the introduction of a peg like figure would replace the models and grow in numbers in the New Kingdom as shabti.


The printing of the book is quite crude and a number of the images are obstructed by the blackness of the pictures and such a shame as I would have liked a good view of the mummy on page 80. The authors put on a good show breaking down the meaning of some of the most common amulets.


I am impressed with the description of  the characters participating in a ritual party of a nobleman's funeral  of the New Kingdom. The evolution of the tomb is next from the simple pit used to dispose of the poor, The authors explain:


"For the poor there were yawning trenches always ready. Their rites were hurried, and at evening a thin layer of sand was spread over the days burials.", "One Theban poor pit was unearthed in which sixty layers of bodies were discovered without the bottom layer having been reached."


We are next onto the pyramid texts of the late Old Kingdom, a series of spells of which some must have been very old already when carved in the burial chambers of these kings at Saqqara. The evolution of funerary texts that followed included the required texts which were to personalize the books of the dead of elite mummies of the New Kingdom onward to the Late Period.


The authors write about the content and purpose of tomb decoration is from the reliefs of the Old Kingdom to the wall paintings of the later periods. We are told:


"they become more or less profane during the 18th Dynasty, being mostly concerned with everyday life and the dead person's own earthly career. After the end of that Dynasty's Amarna period, however, there was both popular and 'state' reaction against the heresies of Akhenaten", "and the pictures became more exclusively religious as the cult of Amun was re-asserted."


Mortuary contracts played a part in many tombs as the owners wished to be remembered forever with offerings. Perhaps the contracts carved on the walls of Hepdjefau's tomb, a 12th Dynasty noble being most famous. Unfortunately, these contracts eventually fizzled out probably pretty soon after burial as descendants could care less about the dead person.


The gaudy displays of nobles being buried with all their goodies were likely noticed by the poorer classes who naturally coveted the better life these corpses could bring to them. The authors include the arm found in the tomb of Djer and the empty sarcophagus of King Khufu's mother Hetepheres.


The story of the scandal of the tomb robberies of the late New Kingdom and the rounding up of the royal mummies into their caches is told, the ensuing effect of these robberies is the economy of Thebes improves during the 21st and 22nd Dynasties. We are then onto tales of the nineteenth-century discovery of these robbed burials and the related documents including the discovery in 1881 and 1898 of the royal mummies.


In chapter six the authors deal with the rise of the cult of the Aten in the reign of Thutmosis IV with its ultimate climax as the God of the King Akhenaten leading to the battle with the powerful Priests of Amun and the building of Akhenaten's capital far away from Thebes in the desert at Tell el Amarna. The surviving royal burials are discussed including Valley of Kings tomb 55 and 62, the tomb of Tutankhamun.


At this point, the discovery of Tutankhamun's tomb is explained and the authors go on to compare the find with those kings tombs Pierre Montet found at Tanis twenty years later of the 21st and 22nd dynasties. The final chapter deals with mummies and their value to Europeans as ground up powder for medicinal purposes.


Early 19th century explorers such as Belzoni left colorful descriptions of tombs full of mummies yet by this time the mummy as medicine was at an end instead now the mummy was a star at events or unwrappings in Europe. The authors tell an amusing tale of a Polish traveler who cut up 2 mummies and put them into 7 boxes of dried tree bark,


"a priest bound for Jerusalem came aboard. Once at sea, he began his customary prayers, but almost immediately a great storm blew up and he was additionally harassed by the vision of two specters. The crew promptly put this down to the dismembered mummies stowed below in their bark boxes, but the Pole resolutely refused to believe such nonsense until the priest again said his breviary and a second storm arose. The ghosts appeared once more.."


At this point, the authors remarks are on seances, a haunted coffin lid and pyromidiates including one who believed the great pyramid was a huge water pump in which the sarcophagus would float around the kings chamber clanking against the walls and roof of the room telling how full the tank was.


The book turns to X-ray technology used on mummies and their dentition, interesting as the authors include the research on bread and wheat of the ancient Egyptians in relation to their teeth.


In the end, the cheap production of the book along with a shaky beginning did not say continue, the authors, however, did pull it together for the overall content of Mummies; Death and Life in Ancient Egypt was a worthy read which was deserved of a far better binding.


"Behold", "The King has been taken away by poor men. He who was buried as a divine falcon is now laid on a simple bier. What the pyramid hid has become empty,"