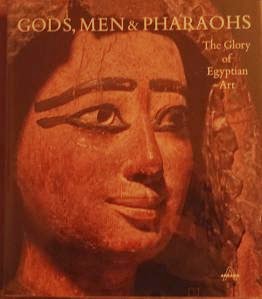 This large beautiful coffee table book is by its very size difficult to read so I am going to be propping the book up with pillows. The book begins from the prehistoric era an overview of the climate and its effects on the cultures that existed in the two lands at the time.


The book will require a second bookmark as there is a catalog referenced frequently at the back.The opening full page photo of a wavy handle Nagada II pot with loops for suspension is decorated in red with Ibex's, a treasure from the Roemer- Palizaeus museum.


More interesting to me is a Nagada I pot from Brussels Mus'ees Royaux d' Art et d' Histoire, the 5500-year-old vessel has white decoration that includes a man with his arms raised high above him while on his head are a number of  perhaps feathers or horns, his penis is prominent and he has two people around him. In sculpture, we find that in the late prehistoric period colossal statues were being raised for the fertility God Min.


The author lays out the development of slate cosmetic palettes at the dawn of history, in particular, the royal and historic palettes which demonstrate a turbulent period and the rise of central authority in the king of the two lands. The temple deposit at Hierakonpolis yielded the most important of these being of the unifier King Narmer.


The pictures feature beautiful pieces from various museums including many of which are new to me though some old favorites are present including the British Museum's tiny ivory figure of a king dressed in Heb Sed garment, the two photos are large showing the figure in great detail. The author is clear and puts forward the development of the gods and the importance these gods had on the local and the national population.


Ms. Woldering closes off the Archaic period with a most interesting granite statuette in Leyden's Rijkmuseum van Oudheden, the statuette dated to 2600 B.C. is masterfully rendered in hard stone. In the next chapter we on to the Old Kingdom and the pyramid age beginning with the accession of the first king of Dynasty III, Zoser.


King Zozer, known as "the opener of the stone" is given this title as the first king to build his monuments in stone including Egypt's first pyramid at Saqqara, the kings tomb and the court for his afterlife are all hewn in stone. The enchanting paste fill sunk reliefs from the tomb of Nefermaat are always a pleasure to see and here the reader is presented with a color picture of men catching ducks in a net., this technique had a flaw of the inlays drying up and falling out and so the experiment ended where it started at Meidum.


We are told about the rise of the position of vizier in the IVth dynasty occupied by princes of the royal family. The text is a relief from the last couple books I have read as it is interesting presenting many facts that one forgets over time with the standard overview dominating thoughts as a complex evolution is easily lost, yet captured here!


The enormous excesses of the IVth dynasty god-kings brought about a strong desire to have and not live at the mercy of kings who had bankrupted the country for their necropolis at Giza. Long through Egyptian history, these god-kings were passed down as brutal tyrants even though their pyramids must have obtained great reverence, awe and a proud contribution to the national consciousness as they do today in a ruined state.


The author puts forward the art of this period, the statuary and the reliefs that decorate the tombs of the courtiers which reflect the desire to live on the sustenance obtained from the reliefs forever in the afterlife. The statuary of the nobles of the period are stiff productions where the heads emerge from the cold plains of the body to present individual portraits of character.


The introduction of the scribal statue created a tradition that would cross all of the remainders of Pharaonic history. It is in the unknown scribe in the Cairo museum of the Vth dynasty that all these come together to present an educated living man wearing only a kilt in his prime of his life.


With the rise of the Prince of Thebes to the kingship of Upper and lower Egypt under the XIth dynasty we find a remarkable king in Mentuhotep II in an unremarkable dynasty complete with his adaption of the Old Kingdom pyramid in his mortuary temple against the cliffs of Deir el Bahri. It is within the deterioration of the XIth dynasty that a vizier Amenemhet accedes to the throne as King Amenemhet I and with the foundation of the XIIth dynasty a golden age is born. The author says of the state of royal sculpture of the Middle Kingdom,


"It affords a picture of the king's frightening isolation, heroic greatness, and maturity, conscious as he must be of his place in eternity, with all the scepsis and inner tragedy to which this knowledge must lead."


This is most evident in the sculptures of the great Sesostris III and his successor Amenemhet III both bearing faces deep with the lines of age. It is within this dynasty that the block statue came into use with only the head and feet and occasionally the hands emerge from the squatted figures garment creating broad plains for elaborate inscriptions. The quality in the reliefs and jewelry of the period were never excelled above in the remainder of Egyptian history.


A long line of weak rulers and provincial kings led to an occupation of Egypt by foreign invaders until the King of Thebes finally drove the foreigners from Egyptian soil re-unifying the two lands under King Ahmosis, the first king of Dynasty XVIII and the period of the New Kingdom. A stunning black and white picture of an exquisite wood shabti of Iy from Hanover's Kestner Museum is rendered in such fine detail.


With the beginning of the New Kingdom the venue of kingship changes as once again, the King's of Upper Egypt become kings of a unified country and on to become emperors of Egypt's greatest epoch. These kings are military men who look to the empire as a means of protecting the country and filling the coffers.


Ms. Woldering explains that these kings are great benefactors to the temples of the gods and it is at Karnak that most of these rulers built edifices to Amun Re and themselves. The author tells "in the festival hall of Thutmosis III at Karnak there is a sequence of reliefs highly characteristic of the spirit of the age, showing plants and animals which the king brought back with him from his campaigns in Asia. The life-like accuracy of these pictures and the life-affirming joy in the phenomena of an alien world are the product of the open-minded spirit which prevailed in the Thutmoside era."


With the maturity of the XVIIIth Dynasty, we find its most opulent king in Amenhotep III the builder of the Colossus of Memnon in front of his long destroyed mortuary temple as well as numerous other monuments built with the huge funds of the empire bringing a period of peace with cordial relations between Egypt and her neighbors.


Included within the objects chosen for the book are many infrequently seen masterpieces from Moscow's Pushkin Museum including the ebony statuettes of the Priest Amenhotep and the lovely singer of Amun. The heresy of Akhenaton destroys the family dynasty with  Akhenaton's egocentric religion alienating everyone but the king and royal family .


The art of the period departs from the traditional imagery of the warrior king to a family man kissing his children, introduced is a luxuriant ruler basking in his own grandeur playing with his strange looking family. Perhaps it is the face of the yew wood head of Queen Tiye that best expresses the loss of empire which the elderly queen had been unable to halt.


Following Akhenaton's fall, a couple of boy kings and an old man struggle to stabilize rule briefly in a vain effort to stop the inevitable. In the last king of this dynasty Horemheb, we find the erasure of the Amarna kings in this effort not to stabilize the royal house but Egypt itself .


From this rises three strong kings who attempt to consolidate and recoup the empire lost in this end a general and vizier to Hormheb named Ramses takes the throne being soon replaced. "After a brief reign, he was succeeded by his son Sethos (Seti) I, who managed to recover Palestine and Lebanon." In Ramses II we find the penultimate king ruling almost seven decades of high propaganda.


The monuments of King Seti I including his temple at Abydos with its delicate reliefs and his tomb in the Valley of Kings completely decorated revealing the valleys finest monuments. While too frequently the hasty craftsmanship of Ramses II produces a gaudy effect. "On the one hand, sculpture reverts to the elegant and graceful style of the late phase of Dynasty XVIII, developing an extra-refined, highly sensitive idiom both in form and in expression. On the other hand, there is a greater fondness for monumental proportions".


Charismatic King Ramses II lived far too long outliving twelve crown princes until at his death the elderly and effective Merenptah ascended the throne for a decade until the dynasty fell apart. Of Dynasty XX we are told of the last flourish of empire in King Ramses III, a son of King Setnahkt. The author explains the statuary of the Ramaside era, "Private statues revert to the absorbed expression of those from Dynasty XVIII. In temple sculpture, which is still more plentiful than tomb sculpture, we frequently encounter the block statue. In its simplicity, it suited the requirements of the age, which sought to express inner contemplation."


With the loss of Empire Egypt spends much of its history occupied by foreign rulers up to Alexander the great and the Ptolemies in the IVth century B.C.  In art the people look back to the glory days of the two lands, reliefs reflect scenes taken from the tomb reliefs of the Old Kingdom with the tomb owner dressed in contemporary garments.


Contributions provided by the Ptolemy's in the temples including at Edfu, Dendera, Philae and Esna, gone are the free flowing reliefs replaced by rows of Ptolemies in front of gods with hieroglyphic inscriptions dividing the scenes. In royal statuary of the period, we find the Egyptian king in all his regalia and clearly Greek or Roman.


The book ends with the aforementioned catalog of statuary from many museums which had been noted in the margins as the text moved along. I thoroughly loved this read, in it, I found a well-represented timeline of the Ancient Egyptian people, the politics, art and the gods of the ages all came together in Gods, Men & Pharaohs.
Posted by Timothy Reid at 7:30:00 PM