The Illustrated Guide To The Egyptian Museum In Cairo 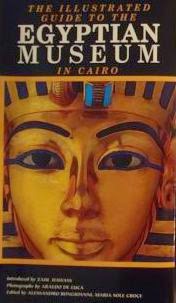 This guide to the Egyptian museum in Cairo is a nice size to carry around the museum and a jewel box of colorful pictures which include some of the finest works of Egyptian art created. The introduction is by Dr. Zahi Hawass complete with very nice images of Egypt's first national museum founded in the Boulaq neighborhood of nineteenth-century Cairo. The Boulaq Museum was prone to flooding added to the fast growing size of the collection necessitated its move to a new home in Tahrir square in 1902.


The guide contains lots of useful information to visitors of the museum including maps and other practical notes, advice, and chronology. As the visitor enters the museum they will come upon room 43 which the guide gives the reader a description of Egypt's Predynastic period including the unifying of Upper and Lower Egypt and into its Archaic period of Dynasties I, and II, leading to the Old Kingdom beginning with the famous palette of Narmer of Dynasty 0. 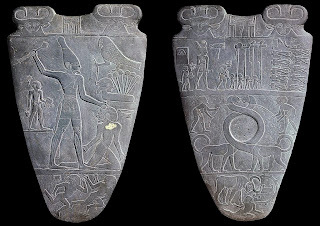 The first unusual things that caught my eye are four necklaces from the Thinite period of Dynasty I and II. Three of the necklaces were found by Z. Saad at Helluan in 1942 and the last in 1945. One of the necklaces, a faience choker with a pendant of a falcon on a boat having been found on the neck of a First Dynasty mummy. The guide is of course packed with many of the collections most famous pieces but with a considerable many more like the previously mentioned necklaces being unknown to me.


A parade of minimally dressed officials of the Old Kingdom, their servants, and their rulers pass often in excellent states of preservation. The men wear a short skirt or loincloth and perhaps some jewelry, while the women wear tight sheer fitting dresses with or without the breasts covered completed with accessories.


In room 41 can be found some fragments from the Fourth Dynasty Mastaba tomb of Prince Nofermaat at Maydum. Unique in its technique of inlaying colored paste into its limestone carved scenes produced immensely beautiful works of art that unfortunately had the fault of after the paste elements dried out they proceeded to fall out of the limestone intaglio.


The reader is next on to the Middle Kingdom dominated by Theban rulers of Dynasty XII who moved their capital to the Fayum. This is ancient Egypt's 'Classical  Period' in which the arts excelled and in some cases were never to be improved upon with particular importance in the thoughtful and reflective literature of the age. My favorite sculpture of the age is likely a black granite bust of Amenenhat III wearing the wig of a priest. One of a number of unique and stunning depictions of this late Middle Kingdom ruler that are to be found in room 16. 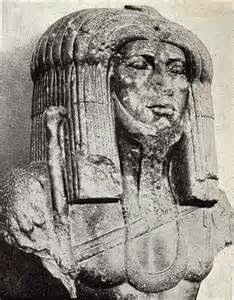 The guide is fast moving with lots of provenances given to the objects on its pages. Unfortunately for me, I am a lover of mummies and so far there are no mummies. The authors present a short rundown of the New Kingdom representing a number of attractive and colorful stela of minor officials followed by statuary of high officials and royalty located in room 12. The 1906 accidental discovery at Deir el Bahri of a shrine and statue dedicated to the cow goddess Hathor brought to light a monument in an outstanding state of preservation can also be found in the same room.


As I get deeper into the guide the words and pictures vanish into the crevice of the book requiring the spine to be broken apart to catch those details. The famous Amarna period material kept in room 3 contains an image of a young girl eating a duck. This is such a rare depiction in thousands of years of ancient Egyptian art executed by a talented hand. So many masterpieces it is hard to choose but a less well-known relief in the museum of a block representing prisoners being grabbed by the hair in a classic smiting scene is among the finest of such cheery scenes and a great work of art that can be found in room 14. 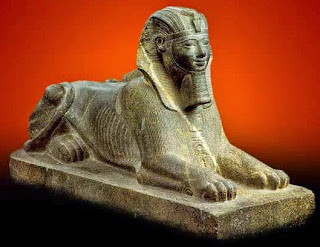 As I continue reading on into the Late period I am impressed by the huge number of sculptures and stelas in the guide from the court of the cachette deposit of statuary found by George Legrain at Karnak the beginning of the last century. With the Ptolemaic rulers, Egyptian art became Hellenized containing both the traditional Egyptian formulas but modified to please Ptolemaic sensibilities.


The guide is next on to the boy King Tutankhamun and his treasures with a brief rundown of his life and the discovery of his tomb. The objects presented are completely standard choices used time and time again but that is to be expected for this museums guide. In room 4 on the first floor, we have the jewelry vault including lots of magical gems though light on Old Kingdom material the guide is deservedly and thankfully heavy on the Middle Kingdom royal jewelry. The Old Kingdom gold belt of Prince Ptahshepses being a favorite of mine. The jewels of the Middle Kingdom queens and princesses makes up a magnificent treasure within the jewelry collection without equal in quality and delicacy.


From room 4 the visitor will head next to room 2 containing the treasures of the pharaohs found by Pierre Montet at Tanis in the years surrounding the second world war. The tomb Montet found was that of the Pharaoh Pseusunnes I of Dynasty XXI. As luck would have it the tomb also contained the funerary remains and mummies of a number of other kings of the period. 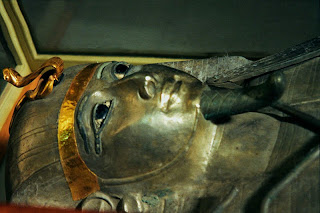 Unlike the childish paraphernalia created to amuse the boy Tutankhamun here at Tanis Mr. Montet found equally stunning material but in this case created for a mature ruler and his class. Found on the mummy of King Pseusennes I was a double string of large lapis lazuli and gold balls. One of the lapis balls has an antique inscription dedicating it to the gods of Assur hundreds of years before the life of King Pseusennes I.


Walking down the long corridor of the first floor a visitor to the museum might be getting a little run down by now but will here find a series of rooms devoted to grave articles and containing some very important finds. In room 12 the viewer will be met with objects from the Valley of Kings tomb of Amenhotep II, and the royal cachette tomb DB 320. Next door room 17 contains the grave hardware from the intact tomb of Sennedjem which contained the funerary remains of twenty members of his family.


A number of rooms are occupied with the Middle Kingdom funerary material including the famous high-quality models of Meketre found undisturbed in a secret chamber of his tomb. The guide moves on to sarcophaguses opening with a brief on the importance the sarcophagus took on in later periods when tombs decorated with magic spells were too expensive for most people to afford. This lead to the coffin texts covering the exterior and interior of coffins. 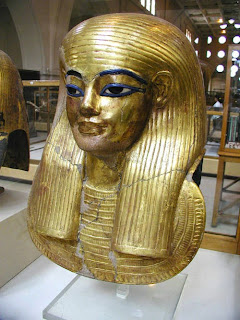 In room 43 on the first floor opposite the lunette can be found the grave good of Queen Tiye's parents Yuya and Tuya. When found in 1905 in the Valley of Kings their tomb was in good condition containing most of its furnishings and mummies in an excellent state of preservation. Visitors will find ostraca and papyrus documents in room 24 with an ostraca of a woman playing a lute. The artist who drew the woman has viewed her unconventionally from above creating an amazing sketch.

The viewer moves on now to room 19 which is filled with statuettes of various gods. At 88cm tall the gold and silver sarcophagus for a falcon is an eye catcher found among other gorgeous objects in the Dendera treasure. About a thousand Fayum Roman period portraits have come to light over the years from a number of cemeteries around Egypt. The portraits were found on mummies or in some cases next to the mummy including some being found by Sir Flinders Petrie in his excavations in the late nineteenth and early twentieth centuries.

The book ends with a five page look at mummies, in this case the most famous kings for a total of six mummies for the entire 632 page guide. The almost total exclusion definitely for me represents a low point for this publication. The back of the book contains a helpful list of images of objects and where they can be quickly located both in the guide and the museum.

Overall the guide is a very fine and useful thing to have while touring this vast museum and its treasures. There were minor printing mistakes but nothing of any consequence. Depending on the visitor or reader this guide may be helpful to those studying the Karnak cachette statue deposit as a the large amount of that material is represented here but if mummies are your thing than this read is a total loss.
Notes:

Many thanks to Derek Wilson who picked this guide up for me on his latest journey to Cairo.

1. Statue of Thutmosis III as Sphinx: Tour Egypt
2. Coffin of Psusennes I: Jerzy Strzelecki
3. Yuya's Mask with thanks to Jon Bodsworth
Posted by Timothy Reid at 5:36:00 PM