Mountains of the Pharaohs 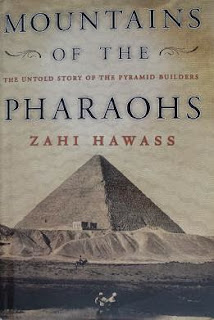 This nice sized book by Zahi Hawass begins with an introduction to the history of the Giza plateau with King Khufu and his architect Hemiunu choosing the place for the king's pyramid. A couple generations later the plateau was essentially finished as the royal burial ground of the Fourth Dynasty. The incredible monuments had begun their fame that would draw visitors throughout the rest of history including a group of imaginative types who believe they were created so that the English race could read the mystery in the measurements of their construction.

This amazing dynasty began with Khufu's father King Sneferu and the building of his pyramid at Meidum that today looks more like a giant pillar than a pyramid. Sneferu gained the reputation of having been a wise king who went on to build more pyramids including the first true pyramid later on at Dashur and the Bent pyramid at that same site.

'A very strange discovery was made by English archaeologist John Perring and Richard Howard Vyse as they explored this pyramid in the late 1830's. Their workmen were clearing the interior passages and suffering greatly because of the intense heat. On October 15, 1839, they opened a tunnel that led to one of the interior chambers. Suddenly, they were greeted by a refreshing draft of cool air, so strong that it blew out their torches. The wind continued for two days, and then stopped as suddenly as it had started, leaving the archaeologists completely mystified as to its source.'

The chapters are short and almost completely void of pictures except for a small group of colored photographs near the middle of the book. With the death of Snefuru his son Khufu mounts the throne and moves his court to Giza where his pyramid was to be built but first his palace and administration buildings had to be built including a canal dug to receive ships that will bring supply's needed in the building and the leveling off of the site to begin the foundation of the pyramid.

The pyramid rose quickly as Khufu's court settled down to the king's business from Aswan to Giza to Heliopolis. In reality, the kings court was as much a bureaucracy as the kings extended family of cousins, aunts, uncles, grandchildren to the kings crown prince. Not helpful to archaeologists today is the number of these royals who bore the same name or names similar. So far I am enjoying this read and find it suitable for a teen though the lack of pictures might be a turn off even so the book is likely to be enjoyed by readers far above those young Egyptian enthusiasts.

After a successful reign of Khufu, he dies leaving his heir Djedefre to make the final arrangements for his father's mortuary needs including the sealing of boats in the boat pits dug for that purpose. With Khufu's passing Djedefre chooses a high plateau at Abu Rawash overlooking his father's pyramid to build his own pyramid and mortuary complex. The site at Abu Rawash has been particularly badly damaged with the kings statues being smashed with what may have been vengeance and the site quarried away for stones to build other projects up to modern times.

The intrigues of this dynasty follow the death of Khufu and have created imaginative scenarios in the minds of past explorers. In Khafre's mortuary complex we find one of the few well-preserved Old Kingdom funerary temples decorated with many statues of the king of which one is likely the great masterpiece in royal statuary of the Old Kingdom. Arriving at the photographs the reader finds a bonnie lot of sixteen images mostly of the pyramids mentioned.

The author goes forward explaining the personalities of Khafre's court and their respective burial houses at Giza. A fascinating read if I can keep straight the queens all bearing identical names and who is next in line of an uncertain succession. The death of Khafre, (perhaps before any of his queens) may have left a void in this succession with the king's heir Menkaure too young to rule so that Khafre's brothers may in turn have held the post briefly before Menkaure was able to rule.

In this king's pyramid, we find the smallest of the three kings pyramids at Giza but built with costlier materials including a granite casing for at least some of the pyramid and many of the Old Kingdoms finest statues of the ruler with the goddess Hathor and nome gods of Upper Egypt. When the king flew to heaven his successor Shepseskaf completed Menkaure's mortuary complex in cheaper materials like mud brick.

In the next section, the author deals with the modern discoveries of the city of the pyramid builders and their mostly mud brick tombs to the south of the pyramids. These discoveries while slightly mundane introduce the reader the sympathetic standard of living endured by the builders as not slaves being brutally beaten but to fellow men and women in joint causes to the betterment of the king and well-being of his people.

In the end, the house of the Fourth Dynasty passes to the kings of the Fifth Dynasty who move their palaces and burial structures to Abusir leaving Giza to be abandoned, vandalized and quarried. The statues of the kings in the mortuary temples being smashed to create funerary offerings for lesser burials at the end of the Old Kingdom.

Zahi Hawass has created in this document a specific and understandable format of the family of King Snefuru and his descendants. Particularly those members of his family who created the monuments on the Giza plateau including the great pyramid. I have really only one complaint in that the book could have used a map to demonstrate the sites at Giza being put forward. Mountains of Pharaohs would make an excellent and uniquely informative gift to anyone interested in ancient Egypt or Pyramids.