Ancient Egypt As It Was 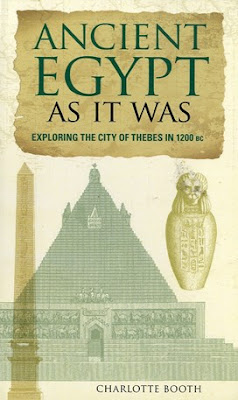 Here we have an imaginative concept as a tourist guide to Thebes in 1200 BC. The guide opens with a historical rundown of Egyptian history leading up to the early descendants of Rameses II and the holy city of Thebes. The author deals briefly with Egypt's unification at the dawn of dynastic history. The reader is introduced to a number of important deities and a quick layout of the cultural development of the Egyptian civilization through time.

The brief sections which the pages are divided into are informative especially the nomes of Egypt which are rarely represented in publication. The author deals with the nuances of societal structure of the age including status and the division of wealth. The ancient Egyptian lady was not subservient to men but could possess assets and estates and could even loan money to her husband unlike in many other cultures.

In the second chapter, the guide moves to the noisy city of Thebes which can be as noisy at night as the day. A number of small maps give the landmarks to the Theban zone including the temple at Karnak and its numerous subsidiary temples dedicated to a number of other gods beside Amun the temple of Karnak's central god. Ms. Booth guides the reader around Luxor temple as well the temples and shrines at Deir el Bahri except Hatshepsut's.

Interesting are the concepts of situations presented the ancient visitor which include the 100-year-old ruins of the flooded mortuary temple of Amenhotep III that in its already abandoned state can be visited throughout including the sacred spaces no longer occupied by the kings mortuary priests. Of The Chapel of the White Queen, the author says;

"The chapel as it stands was built by the heretic king, but was strangely enough not destroyed with the others from his reign, although certain elements can be dated to the earlier reign of Amenhotep Akheppere, and some kitchen buildings still produce food for the festivals on the west bank.

Although abandoned after the reign of the heretic king, it has since been added on by Ramses, and the enclosure wall of his mortuary temple abuts its western wall."

The author makes the statement that most of the tombs in the Valley of Kings are in the western valley when in reality they are in the eastern valley. It is at this point that the book loses some of its effect as the author describes sites including the royal necropolises and the contents of those tombs that would absolutely not have been on the tourists path in 1200 BC.

The reader is next guided to the sites around Egypt outside the Theban zone to Mennefer, Pr-Ramese and the Temple of Ra at Iunu. The vignettes the book is broken into allows for little flow in the text creating lots of little points of interest but no connective story line. Having laid out the tourists landscape Ms. Booth presents native customs of entertainment depending on your budget.

There is lots to do including jumping, playing games, hunting hungry hippos or whacking birds on the head with a stick, or better yet just go back to bed. Thankfully the Egyptian calendar was full of festivals for the public to participate in. Ms. Booth lays down how to, and what to buy while at Thebes but recommends that blank rolls of papyrus make for an excellent light currency to pay for goods.

The reader is informed of various words and phrases to help communicate with the locals including dealing with health issues should the visitor experience illness while traveling. The guide ends with a section on reference and resources for the reader to follow up on the subject.

I found the books concept interesting from the start and was filled with many tidbits that one would not normally find. It must be noted that the choppy nature of the books various elements removed all flow resulting in the book being slightly tedious and boring.

The lack of colored photos might also make this book less appealing to many readers including younger readers. "Ancient Egypt As It Was" is not a book to rush out to get and certainly nothing I will re-visit in the future.
Posted by Timothy Reid at 8:17:00 PM