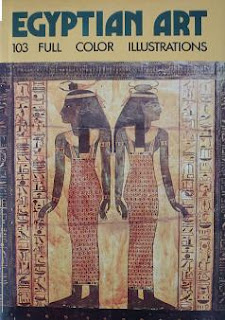 This originally named book contains sporadic text but appears the content of the book is mostly colored entire page photographs of Egyptian art. The lovely small volume immediately appears child-friendly and for the most part, can be read in a day or two.


The author begins with a description of the values the ancient Egyptians put on to art being given magical properties whether, in funerary material, temple situations or as personal adornment, art had a purpose. Soon I come to the first set of photographs with these being images of a number of schist palettes from the Predynastic and Thinite periods leading up to the Old Kingdom complete with descriptions of the objects presented.


Our author explains of the standardization of the arts early on in Egyptian history to serve as a model for the needs of the king and his people. The author recounts the story of the recovery of a book written by the god of wisdom Toth from the tomb of a magician nearby Memphis. Indeed the prince found the book as told in the tomb which instead of being dark was as light as day from the glow of the book.


There follows a conversation between the deceased man and the prince in which the prince wants to take the book but can only do so if he wins a contest in performing magic. The frequently passing photographs are an excellent assortment of masterpieces from a number of museums. These include a two-page photo of the famous diorite statue of King Chephren.


The Old Kingdom tombs of Ti and Mererukas are certainly two of the finest of the period with their raised reliefs of the good life. Two photos are of a pillar in the small temple at Karnak built by the Middle Kingdom King Sesostris I. The magnificent reliefs demonstrate the mastery of relief carving in the beautiful little temple.


'The nobles are full of misery and the low classes are full of joy...gold, lapis-lazuli, silver and turquoises, hang on the necks of slave-women while ladies walk the streets in rags...He who once did not even possess sandals, today is the master of treasure.'


The Middle Kingdom was a period of soulful thought in the reunification after the turmoil of the First Intermediate Period. The king was no longer a god as in the Old Kingdom but a man who must bear the responsibility of for the well-being of his people. Our author is very knowledgeable and in a few pages is able to give a fairly substantial account of the history of ancient Egypt.


A variety of  photographs depict some very famous royal statues, frescos, and art of the New Kingdom. The depictions displaying rulers who are now confident warriors expanding the empire to its greatest extent under Thutmosis III. These victories bring spoils back to Egypt allowing for a prosperous population while making the priests of Ammon exceedingly rich.


Each ruler of the New Kingdom tried to out-due his predecessor's accomplishments in their contribution to the building temples, shrines and of course the kings tombs in the Valley of Kings. The stage changes and a series of works of the Amarna period are put forth to the reader. As Iknaton's religious reforms involved only the king and royal family no connection was made by the god to the average Egyptian. This left no following and Iknaton's religious reforms were soon forgotten after the king's death.


Tutankhamen and his officials who were giving guidance to the boy king saw that Iknaton's capital at El Amarna was distant from the seats of power so the king moved his court to Memphis and returned to the worship of Ammon ending the heresy of his predecessor. The book includes a nice picture of a colossal statue of Ramses II from the now lost temple of Gerf Hussein which today lye's at the bottom of Lake Nasser.


After the grandeur of the New Kingdom, a period of decline existed where the two lands were ruled by foreign kings. Lybian dynasties gave way to Ethiopian kings who reversed the age-old role of Egyptian domination over the southern neighbor. In turn, the Persian kings took over Egypt as an outpost of their empire under Nebuchadnezzar who's army had overthrown the Pharaoh Necho.


With the arrival of Alexander the great, the Egyptian traditions were respected though the Egyptian people had now become second class citizens under the rule of the Ptolemaic Dynasty. With the death of Cleopatra VII, Rome took control of Egypt reducing its status to provincialism.


I have very much enjoyed this book and though not complex the author managed to lay down a good account of Egyptian history. The 103 photographs presented many exceptional pieces with a number of these artifacts being new to me. Between the text and the choice of objects I am impressed and would have no hesitation giving this volume to a young person.