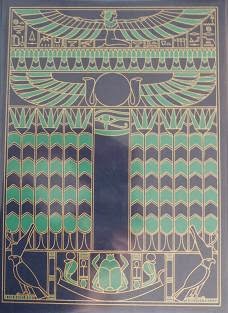 This attractive book opens with the usual rundown on ancient Egyptian history accompanied by a fairly standard set of images and drawings. The author takes the reader to the age of modern Egyptology through the many explorers, but particularly English explorers of the last couple centuries for the volume.


In the days before the second decade of the nineteenth century, Egypt was a dangerous territory to explore resulting in only a few European men who dared the journey, not always with success, some of whom came back home and paid heavily for failure. An early traveler was John Greaves who visited Egypt in the 1630's and who wrote of the Giza pyramids in his 1646 publication,


' Aristotle judged them to be the Works of Tyranny; and Pliny conjectures that they built them, partly out of ostentation, and partly out of State policy, by keeping the people in employment, to divert them from Mutinies and Rebellions. But the true reason depends on higher and more weighty considerations. And this sprang from the Theology of the Egyptians, who believed, that so long as the Body endured, so long the Soul continued with it.'


The value of the materials, particularly in the drawings left by these early explorers capture frequently details that no longer exist in our time including the temple of Armant dismantled for a sugar factory. These adventurers were followed in suit with a continuation of the ancient Roman policy of removing obelisks and everything of perceived value to Europe.


The reader is introduced to William John Bankes and British consul in Egypt Henry Salt, of whom's combined efforts contributed to the decipherment of the hieroglyphs though much not to their credit. Both men would add to the science of Egyptology for its day but ultimately it would be their status as Englishmen with deep pockets that made the material accessible to scholars in Europe and also for their drawings which may be their greatest personal additions still relevant today in the science of Egyptology.


The list follows from one well healed English scholar to another with names of the who's of the educated elites of the day led by letters of the English empire. Fine schooling produced high-quality results from surveys of epigraphy which foresaw their own importance and recorded with amazing fineness,and acute observations knowledge of temples, hieroglyphs, and nuances of things that no longer exist on the ground today. A romantic watercolor by Henry Salt of "Grand Cairo" he painted in1809 is an example of great beauty as is the small image by John Gardiner Wilkinson of an Egyptian chariot.


"The Ptolemaic temple at Antaeopolis had been swept into the Nile in 1821; the small temple of Amenophis III on the island of Elephantine had been dismantled in 1822 to provide building material for a palace of Mohammed Ali Pasha at Aswan; the great site in Middle Egypt of Hermopolis Magna, a center of the great god Toth who was, among other things, the scribe of the gods, was a continuing source of material for building, and other purposes."


Passing through the half-way point the book is a bit of the re-telling of the lords of the empire and not the Egyptian empire. It is here the reader is presented with a lovely two-page color image of the banquet scene held for Nebamun. The famous piece of art from that man's funerary chapel at Luxor among others now in the British Museum.


Not too little could be said for the illustrations adorning the book of which many are rarely seen and a definite interesting strong point for readers. The purpose and expenses of epigraphy laid bare produced monuments where damage or no monument exists today.


In Miss Emelia Edwards we find a champion of the Egyptian landscape and its monuments. At Abu Simbel many years earlier the taking of plaster casts of the northernmost colossus of Rameses II had been completed with not much care into cleaning up the mess properly at that time and as a result, the head was disfigured by chunks of bright plaster which had adhered to the face. This situation was corrected by Miss Edwards and her fellow party members in 1874.


"A scaffolding of spars and oars was at once improvised , and the men delighted as children at play, were soon swarming over the large head, just as the carvers may have swarmed over it in the days when Rameses was king. All they had to do was remove any small lumps [of plaster] that might yet adhere to the surface, and then tint the white patches with coffee.""It took them three afternoons to complete the job, and we were all sorry when it came to an end."


Miss Edwards went on to found the Egypt Exploration Society and with her energies has left a legacy of Egyptian history recovered from its oblivion. Mr. James moves through the early excavators working on behalf of the society including Percy Newberry and Flinders Petrie. From these early days were see the great skills of artists copying the paintings on the tomb walls, like Howard Carter in particular, a fresh face with great talent and still in his teens.


Arriving in Egypt and but 17 years of age Howard Carter's artistic ability was confident and of tremendous value, to the archaeologists whose guidance he worked under though Petrie felt it of little use to train him as an excavator. Carter being trained as an artist realized early on that the mechanical devices used for epigraphy were no substitute to a competent hand. In the end, most will remember him as the man who discovered King Tutankhamun's tomb and not for his amazing works in epigraphical recording at sites like Beni Hassan and Deir El Bahri to name a couple.


I was very much taken by the point of the importance of the epigraphical volumes produced leaving a record of not only fading inscriptions but of ancient Egyptians living, working, playing and in repose. The late Mr. James has brought a history not of excavation but of the memory of those ghosts who linger in their houses of eternity as well as the great rulers and men whose deeds they wanted to be remembered.


"Egypt Revealed" is a fine telling suitable for most but perhaps intended for readers of more mature age though whatever the age Mr. T. G. H. James book is a must have for any Egyptian collection.
Posted by Timothy Reid at 5:56:00 PM