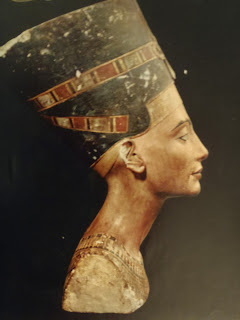 In the introduction, J.R Harris talks about the enthusiasm for Egyptian art brought on by the Napoleon expedition at the start of the nineteenth century. The shattering of the perception of Egyptian art being rigid and standardized next to the classical styles of Greek, Roman and Renaissance art which pervaded the mind of the time.


"Such detachment is indeed less difficult now than it was in 1821-2 when London flocked to see Belzoni's 'curious remains of antiquity' in the Egyptian Hall in Piccadilly, or when Mariette revealed the art of the Old Kingdom to an unsuspecting Parisian public at the great exhibition of 1867, for with the rise of the modern art movements and their deliberate rejection of traditional concepts the tyranny of 'photographic' representationalism  has been broken, and much of the prejudice attached to art which is formalized or intellectual has been dissipated."


The development of the art of ancient Egypt from the prehistoric to the Ptolemaic and on including the trend to the most naturalistic style of the second half of the 14th century B.C. in the Amarna period. The author presents us with 4 pages of black and white pictures, interesting as about half of them are unfinished including a part of a wall in the tomb of Horemheb in the Valley of Kings.


The tools used and the set standards used by professional artists over time to create for the wealthy clients and kings of their days. The subjects chosen change and the materials used and are more or less based on the permanence of granite or the fine glow of alabaster, whether the client is decorating his tomb should he have a good life and his worthy deeds recorded or his service to the king.


Mr. Harris is on to a section of notes about the previous black and white pictures and drawings that accompanied the text. This section is immediately followed by descriptions of the color plates at the end of the book.


The off color pictures occupying whole pages are pretty standard choices though I did like the picture of the painted statue of Methethy and the relief of Hathor from the temple of Seti I at Abydos. In this book,  J.R. Harris has put forth a simple yet insightful read.


Considering that half of the book was just pictures it made for a quick and easy read suitable for 10 years and up, the book, a worthy read about Egyptian Art.
Posted by Timothy Reid at 5:15:00 PM