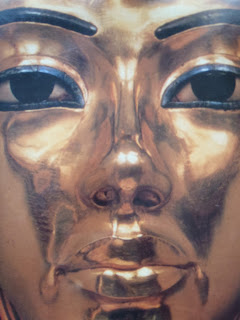 I must open with the truth, as I go through my Egyptian collection all of the unread books about Tutankhamun, (and Cleopatra), are becoming more and more dominant in the collection as books about mummies, the Valley of Kings and pyramidiots are read and removed!


This book opens with a forward by the current Earl of Carnarvon about his glamorous ancestor and his association with Howard Carter and the boy Tutankhamun. Mr. Reeves sets out the boy king's family chronology and a brief introduction into the tombs discovery.


The known history of Tutankhamun's illustrious early 18th Dynasty ancestors is presented including Thutmosis' I, II and III leading up to the height of the Egyptian empire with the boy king's grandfather "Amenhotep the magnificent". The Amarna period with its  heretic Pharaoh Akhenaten, (Tutankhamun's father), deals with the various aspects including the rise of the Aten, the art and the conflict with the priests of Amun including the erasure of the gods name from the monuments.


The reader is presented with Nefertiti and the succession of king and characters of the court during the period. A quarter century since the publication of the book and yet we know little more of Tutankhamun's parentage and about the boy king himself.


I loved the rundown of the known monuments of Tutankhamun including faience jewelry and seals bearing his name from sites in Egypt and collections around the world. Mr. Reeves is next on to the officials of Tut's reign including Nakhtmin who gave shabti's to Tutankhamun's burial.


"On a statue of the man probably carved during the reign of Ay, Nakhtmin is designated 'king's son'. If Ay had intended that Nakhtmin should succeed him, it was an ambition which Horemheb was destined to foil."


With the reign of Horemheb begins the erasure of the Amarna period kings including Tutankhamun's name from history so fortunately was the memory of his burial also forgotten. From here 3000 years pass and we are on to the search and discovery of the tomb starting with the belief by Theodore Davis that the Valley of Kings had now been exhausted of find's.


A number of Mr. Davis' discoveries are noted especially those which were related to Tutankhamun including the mortuary deposit found in Valley of Kings pit KV54, which Mr. Davis believed was the tomb of Tutankhamun, the contents of Kv54 rescued from Davis' brutal treatment of the material by New York's Herbert Winlock who realized the importance of it and brought it back to the Metropolitan Museum of Art for study.


The author is on to the early career path of Howard Carter in Egypt as artist and trainee archaeologist who left Flinders Petrie unimpressed. An amusing sketch from a low point in Howard Carter's career in 1909 by fellow Inspector of Antiquities Arthur Weigal shows Carter as down and out.


Lord Carnarvon arrives in Egypt for his health and decides to excavate to pass the time finding little but a mummified cat with this Lord Carnarvon receives an introduction to Carter to help the lord in his excavations. Mr. Reeves  then presents the personal antiquities collection of Lord Carnarvon and writes about the early excavations among the royal tombs of the New Kingdom.


We are now on to the tombs discovery and the gathering of experts in different fields to aid in its cataloging, emptying as well as restoration and decipherment of the sepulchers contents. The death of Lord Carnarvon becomes a setback to the team as the lord was the team's public relations man and was very good at it unlike Howard Carter who on top of everything else had to now deal with the press which now included Arthur Weigall who had derided Carter years before.


As the situation worsens Carter and his team are locked out of the tomb by Nationalist and Carter's own arrogance, during which time the sarcophagus lid was left suspended above the sarcophagus and the pall was forgotten out in the open becoming ruined.


"Mr. Carter's agitation on discovering the condition of the precious object was intense, but he contended himself with the remark, "Well, anyway, it's your pall, not mine, and it's the only one in the world."'


Worse still Carter is informed that the Nationalists found a wood head of the king in a crate in the tomb of Ramsses XI used as the team's dining room. Mr. Reeves writes about the tombs architecture and decoration and various elements including objects found within these areas of the tomb.


Again the photos are numerous though I am impressed by the drawings of the various seals found in the tomb including a list of where they were found. The evidence of robberies in ancient times is reviewed with the possibility that there were two robberies and that one of them occurred during the reign of Horemheb.


This point the author writes about the shrines, sarcophagus, coffins, mask and mummy of the king with a number of Howard Carter's drawings of the mummy in various stages of unwrapping. Of the canopic shrine Arthur Mace to his wife:


"One thing in particular...simply knocked us all of a heap...I think it is the most beautiful thing I've ever seen anywhere...Round [the canopic shrine] were four statues of goddesses, most un-Egyptian in attitude. and beautifully modeled."


Mr Reeves writes about the chest and its contents including notice that much of this material belonged to a recent ancestor. The fetus' found in the treasury are examined and said to be the unborn children of Tutankhamun and Ankhesenanum.


Chapter V titled "Treasures of the Tomb" like the rest of the book the treasures are listed beginning with the guardian statues and moving through the tombs mysterious ritual figures and objects of magic including a list of the ritual figures and where they were found in the tomb.


I guess it is the nature of the subject that the pictures are pretty standard after all the countless publications on Tutankhamun, there cannot be much more to photograph as unseen, but I am a critic and the images will guide a person including children into a clearer view of the find.


The author is on to the 413 various shabti's found with the king including those donated by courtiers including Maya and Nakhtmin. These servant figures appear in many materials and include some wonderful examples in gilded wood.


Among the king's funerary models included 35 boats of all kinds with amazingly much of the rigging and linen sails still present. Mr. Reeves is on to the three ritual couches, two of which were put together wrong having their parts mixed up with each other.


With Tutankhamun's jewels, we find his fame and little wonder even though most of the best pieces were stolen thousands of years ago along with many of the precious linens and cosmetics. It is not often the viewer is presented with an image of the broken mirror handle as well as the lid of a lost gold box or little game sticks.


Perhaps the greatest regret of the tomb was that it lacked documents of the kings time which were bureaucratic in nature and instead only dockets of contents of boxes, baskets, jars and creation dates of objects, including of course the magical texts needed in the king's journey through the underworld on much of the funerary equipment, but no bio of the boy king and even stranger no mention of his mother, a feature most common in pharaonic burials but not to KingTutankhamun's burial?


The author presents an effective breakdown of various classes of artifacts found within the sepulcher including condition when found and anything quirky such as the black cloth covering the back of the golden throne as if to hide it. In all the main ancestors mentioned in the burial are Akhenaten and the late immediate family of the heretic including Neferneferuaten and Meritaten though a scribal pallet belonged to a pre-deceased sister, Meketaten.


It cannot go unnoticed that among Tut's Heirlooms are a few objects dated to the time of the great ancestor Thutmosis III. I guess my problem with books about the tomb of the boy king is the descriptions of large quantity of objects found which to myself feels like it keeps going on and on and on long after I have lost interest!


Thankfully at this point, I have found myself at the end and must confess I enjoyed it and consumed it quickly. I have found for ages 10 and up that if you never read a book about Tutankhamun or if you have read too many Nicholas Reeves brings to an over exposed morbid theater a worthy composition in "The Complete Tutankhamun".
Posted by Timothy Reid at 7:06:00 PM