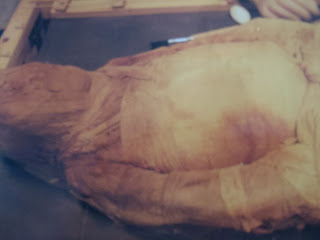 
In the winter of 1904-05 Edouard Naville on behalf of the Egypt Exploration Fund was excavating the Eleventh Dynasty temple of King Mentuhotep II against the limestone cliffs of Deir el-Bahri, when his team discovered the burials within the temple of four wives of Mentuhotep. The tombs constructed early on in the building of the temple were later built over by a wall and when located by Naville in that winter all four had been anciently plundered. We are told:


"a tomb pit, subsequently numbered 7, was located behind the third of the shrines from the northern end, that of Sadeh. Descending the vertical shaft, sixteen feet deep and choked with broken blocks from the temple, Ayrton's men entered the rock-cut burial chamber."


The men found the original ladies burial destroyed including the fragmentary remains of the kings wife shoved into a corner of the room while in the center was a garlanded coffin a thousand years later than the lady, the Twenty-First Dynasty coffin inscribed for the mummy of Horemkenesi. From here the author tells of the known data about a priest named Horemkenesi through six graffiti left around the Theban necropolis' and the inscriptions with matching titles on the mummy's coffin.


Next, we are onto the period of the life of Horemkenesi in the late eleventh century B.C., a period of decline in Thebes fortunes. The always powerful High priest of Amun-Re had now installed themselves with the regalia and titles as King of Upper and Lower Egypt even though there was a ruling king, a relative, in the delta making the same claims.


In this climate we find the priestly class buried in mass tombs at Thebes along with the rescued and thoroughly robbed mummies of the New Kingdom royals. Mr. Taylor is on to the role Horemkenesi would have played in his duties among the necropolis' as well as who his relations probably were.


His titles indicate he was Chief Workman in the 'Place of Truth', (Valley of Kings), a title usually handed down from father to son indicating that Horemkenesi was likely related to the community of tomb builders at Deir el Medina. His job in the valley and surrounding necropolis' was probably as one of the officials rescuing the royal mummies and perhaps appropriating what was left of value in their burials for the state.


The home of the scribe Horemkenesi may well have been in a dwelling within the walls of the fortified mortuary temple of Ramses III where the house of his contemporary Butehamun still exists. Mr. Taylor goes on to tell what the responsibilities of a minor priest like Horemkenesi would be in the service of Amun-Re at the temples of Karnak and Medinat Habu.


The vignettes on Horemkenesi's coffin are charming insights into the dress and style of the priest and the values likely encompassed by its owner, though the coffin was a stock piece with the spots for the person's name left to be filled in by the buyer. Here we are presented with an outstanding picture of a Theban mummy of a priest of Amun which Anatomist Elliot Smith examined and left displayed with its chest wall cut away to show the mummy's internal organs which were replaced back into the body after their treatment and wrapping during the embalming.


Two-thirds of the way through the book Horemkenesi's coffin and coffin board are pictured in color as well as a number of nice pictures of the mummy. The author now contends with the scribes modest funeral and burial in the temple.


With the next chapter, we are on to the subject of the book the unwrapping and study of the mummy, laying out first the protocol that was to be used in this rare event. The poor condition of the mummy of Horemkenesi made the decision to autopsy it in an attempt to get as much information about him as could be retrieved before his ultimate destruction.


This information was especially important as it is extremely rare for a mummy to be known outside tomb information as Horemkenesi was from the various graffiti he left around Thebes. A series of half page pictures show the mummy in various states of unwrapping including an inscription on one of the mummy's linen wrappings confirming that the mummy was indeed Horemkenesi.


After the outer wrappings are removed from the body there are found insect holes and casings indicating that the mummy was infested with bugs before being wrapped. Once completely unwrapped it appeared that Horemkenesi was likely already in an advanced state of decomposition when the embalmers started their work.


Thankfully the book contains many images of the unwrapped mummy during its dissection certainly some of the best pictures in the book. The author lays out from the unwrapping how Horemkenesi was embalmed which appears to have been frugal with no luxuries such as amulets.

Once unwrapped Horemkenesi's badly deteriorated head is removed and cleaned of all remaining mummified flesh so that the skull can be used in a reconstruction to show how he may have looked. From all the findings Mr. Taylor sets forth what evidence there is to the cause and circumstances of Horemkenesi's death.


John Taylor has put together this short book, at only 105 pages a rare and worthy read for anyone ages 10 and up and regardless how old you are this is one of the few times in your life you will have the experience of Unwrapping a Mummy!
Posted by Timothy Reid at 3:44:00 PM