Chronicle of the Pharaohs 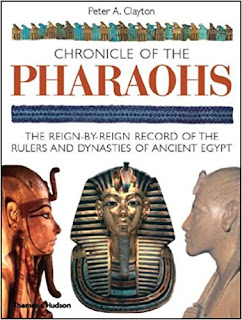 The book opens with the usual background information on Pharaonic Egypt including the author's intentions of tracing Egyptian history through kingship. The introduction deals with the chronology including a rather pleasant and informative overview of the documented sources of information used to tell it.


Peter Clayton heads into the early dynastic kings starting in Dynasty 0 with King Narmer moving through the kings of Dynasty's 1 and 2 including the serekh of each one's name. The monuments and inscriptions which tell their history including the known tombs of each ruler. The author is continuously referring to the historical king's lists to tell the histories of those mentioned therein.


I have to admit I found the blue pages at the start of each chapter a little difficult to read but that's pretty minor so far the content is well presented. Next, we head into the pyramid building kings of the Old Kingdom and their achievements within their reigns.


The book is well appointed with pictures though most are standard fair there are a couple of gems like the statue of Setka son of Djedefre, in the Louvre. The author is next on to the middle kingdom and the two intermediate periods which like the earlier part are well presented and interesting, not too complex certainly suitable for a young teen to read.


In the chapter titled "Rulers of an Empire", Peter Clayton presents the reader with the histories of some of pharaonic Egypt's most powerful rulers and their weaker successors in the era of the New Kingdom including their tombs in the Valley of the Kings.


The author presents many details exploring not only the king's histories but their wives and family relations roles with particularly interesting details in this regard to Ramses III and the burial of his family in the royal valleys including a fascinating breakdown of the titles of Queen Titi in her tomb in the Valley of the Queens.


Soon we are in the late period and the 21srt dynasty with a couple of nice images of the Book of the dead of Herihor and Nodjmet and a good breakdown of the priest kings of Thebes and the ultimate burial of members of this family in the king's cache tomb DB320.


I like at the beginning of each chapter the author provides the names cartouches and the meaning of those names including the birth names and throne names of each king. The book ends with that murderous lot known as the Ptolemies and the end of Pharaonic history.


I very much enjoyed this book Peter Clayton presented a good overview of the kings of Egypt and though often brief in his description of each the author filled those descriptions with lots of interesting nuggets of information. "Chronicle of the Pharaoh's" would make a fine and reliable book to give to a young teenager, however, the adult in the house may just want to keep it for themselves.
Posted by Timothy Reid at 11:39:00 AM