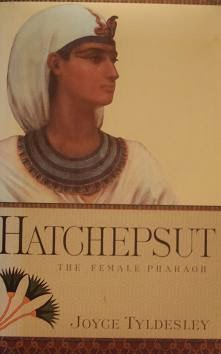 This 234-page book is by the highly accredited Egyptologist Joyce Tyldesley so I felt I was heading into a good read though I must admit that it started off slow. The author certainly has a lot of interesting things to say including the idea that prince's not directly in line for the throne may have had their princely status downplayed as to remove them from potential threat to succession including the complete absence of the title of kings brother while princess' are often portrayed with their kingly fathers on stelae.


The book amazes me as to how far the archaeology has gone in less than 15 years since its publication. Joyce Tyldesley gives a good review of the monuments and events leading up to the reign of Hatchepsut including the strong matriarchal family from which she emerged.


The monuments of Hatchepsut's reign and the mystery of the burial of her father Thutmosis I is handled by the author with great insight. The propaganda Hatchepsut had engraved on her monuments are well portrayed with some thought on the erasure of her name and images being discussed as occurring sometime after year 42 of the reign of Thutmosis III.


The chapter on Senenmut may have been the most interesting to this reader with the author's well researched and undramatic approach her conclusions to the rise, death and damnatio memoriae of King Hatchepsut were sound and made common sense out of a dramatic opera that we have come to know as the life of ancient Egypt's greatest female Pharaoh, Hatchepsut!
Posted by Timothy Reid at 3:43:00 PM

This book is so good- i bought it twice. One for reading and one for study (scribbles and highlights).

A must read to all Hatshepsut/ New Kingdom/ Ancient Egypt enthusiasts,