The Rape of the Nile 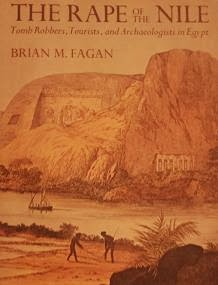 It has taken me a while to get to this book the last year I have been "showered" with books having to select from too many possibilities. That loss of time was truly a loss when I began to read this book by author Brian M. Fagan.


The Rape of the Nile is strong in its descriptive of Egyptian history including the often ignored histories that run from the Roman era to the 17th century A.D., I was hooked right from the start!


The Napoleonic episode, as well as the stories of Henry Salt and Bernardino Drovetti, however, were covered more lightly than I would have preferred. Both men but particularly Mr. Drovetti made important discoveries which were completely unspoken about.


Unfortunately, the next 150+ pages of this book 0f 371 pages were about Giovanni Belzoni which as interesting as the man was I have already read his book and often during that 150 pages I felt I was reading Mr. Belzoni's "Narratives and Operations" instead of this 1975 book.


Once Belzoni passed the book became original again with a rundown of the many explorers who followed including Champollion, Mariette and the great discoveries including some interesting details on the finding of the Serapeum and the discovery of the royal mummies. The author chooses his words well as the Rape of the Nile at the end of the nineteenth century turns finally into the science of Egyptology.


Author Brian Fagan presented the history of plunder to science with reasonable language choosing to finish his work with the hot topic of the prohibition of ancient artifacts. Though I do not believe as anyone knows who reads my site in prohibition but I will say that The Rape of the Nile was a good read.
Posted by Timothy Reid at 1:38:00 PM