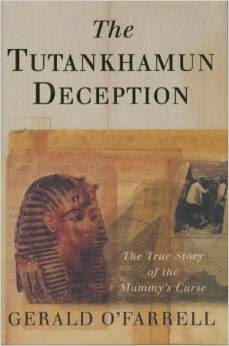 "...one of the most daring hoaxes in history, devised by two Englishmen of repute to cover up what was probably the greatest robbery of precious jewels and gold bullion there has ever been or is ever likely to be."

Mr. O'Farrell tells the reader about his fascination with Egypt and the environment of the days of acquisition from antique shops in the first decades of the 20th century with deplorable damage being done to the monuments in search for treasure to export to European and American museums. The author reviews who the boy king was, and though from an extraordinary lineage of kings he was among the least important being worse yet of the Atenist clan of the heretic Akhenaton.


The boy Tutankhamun's legacy was erased by the kings that followed leaving his identity cloaked by King Horemheb who took over Tutankhamun's statues and inscriptions. The reader is introduced to Howard Carter, never the man of cliques who preferred to spend his time with the local Egyptians whom he cultivated strong ties which would aid his work in the future.


Lord Carnarvon, on the other hand, was attention starved at heart who craved the spotlight, lingering in folly as an aristocratic heir without purpose. The reader is presented with the discovery of the tomb in which the tombs discoverer were portrayed in the media as heroes when in reality the contents of the tomb have ended up in 13 museums including, The Metropolitan Museum of Art in New York.


The discovery of the tomb caused a sensation known as 'Tut' mania which lingers to this day and which turned the Valley of Kings from a leisurely stroll of the upper class Victorian to a three ring circus thronged by reporters, trinket peddlers, the uncouth masses and those holding permission to enter the tomb, who may or may not have been part of the uncouth masses.


Lord Carnarvon made a deal with The Times of London that they would have the exclusive rights to the excavation angering all other news media. Who in turn looked for any angle to sell papers by inventing whatever needed to get the scoop including the mummy's curse.


The author at this point explains that "Carter knew that the tombs of the Eighteenth Dynasty rulers were interconnected", explaining that the entrance to Tutankhamun's tomb as we know it was actually created as a false entrance to hide the fact that Carter and the famous tomb robber clan of the El-Rassul's were traveling through ancient unknown priestly corridors under the valley as early as 1914 to loot Tutankhamun's tomb of its treasures except for enough to be left to gain his and Lord Carnarvon's fame, and respect were are repeatedly told they crave, particularly Carter.


A series of unremarkable black and white pictures pass by with the exception of two with one showing a blank spot in a heavily decorated wall in the tomb of Ramses IX, (?), clearly the author is referring to the tomb of Ramesses VI and explained as the possible entrance way Carter had used to enter the tomb of Tutankhamun and remove the treasure through. Very interesting with all consideration that the tomb of Ramses IX and Ramesses VI are two of the most visited and accessible tombs in the valley, it would appear to me to be a no go.


Mr. O'Farrell would like me to believe that the years from 1914 to the official discovery of the tomb of Tutankhamun in 1922 no one noticed the broken wall with a corridor in Ramesses VI's tomb leading to the boy king's tomb much less Carter, Carnarvon, and El-Rassul hauling out treasure from one of the valleys biggest attractions.


The author now suggests that when Carter entered the tomb via a wall in the burial chamber that at the time of his entry in 1914 that the burial chamber had no wall enclosing it from the antechamber and that the antechamber was on the same level. We are told that Carter and his men rearranged the heavy, cumbersome shrines so that they would be in the wrong direction and lead people not to notice the real entrance which he had entered.


Carter and his men furthermore carved the "entrance"corridor and stairs, (from inside the tomb)and hid the dietrus under the floor of the antechamber raising it to be four feet above the burial chamber, I am not sure if that was with the stuff in the antechamber, or if they removed the stuff in the antechamber and the stuffed the rubble under, then built the partition wall which Carter painted. The idea of the shrines being moved at all was not possible in the cramped space allotted for them in the tomb which required part of a limestone wall to be cut off in order to admit the larger sides of the shrines in antiquity.


This lack of space was further displayed when it came time to remove the sides of the outer shrine which could not be removed from the burial chamber until the interior shrines were first removed only then was there enough room to maneuver the outer panels out.


I get it Howard Carter was not likable but apparently he knew a horrible, horrible secret from papyrus' hidden in the skirts of the sentinel figures of Tutankhamun from the antechamber. Unfortunately, for the author, there is nothing to be seen up the king's kilt, of such receptacles for papyrus' as the author claims?


The authors theories become more and more bizarre with the knowledge of what is in the two papyrus' results in a whole series of murders starting with Lord Carnarvon. Mr. O'Farrell believes the papyrus' told of secrets about the biblical "exodus" and who Tutankhamun actually was, a reason the author believes that Carter had removed the original stone or gold sarcophagus lid and replaced with the present broken granite lid because it had Tut's real identity on it.


I have now had enough of this drawl to count this as one of the most loosely hinged fantasy's and worst most unrealistic depictions of the story of Tutankhamun's tomb and something else that should be hidden under the floor of the antechamber. This is one of those books which needlessly stole part of my life and is on its way to the recycling bin.
Posted by Timothy Reid at 3:32:00 PM