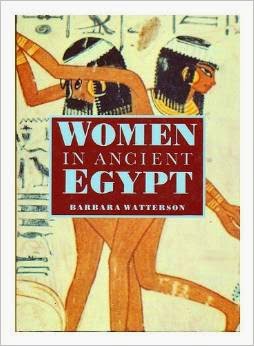 Barbara Watterson opens this book with a list of resources that she used in writing her book but also points out that certain types of documents such as temple and wisdom literature are of little help. Worst yet some of the so called texts of wisdom can depict women as no good gossiping harlots who could not be trusted with a man's business, except mom of course.


The "chauvinist pig" was, unfortunately, present within their society as were the ideals of beauty which always depicted women as slender and in a supporting role of the men. While the man may be depicted as ugly and obese, the wife and the man's aged mother were both depicted as slender youthful figures indifferent of aging.


The social and legal standings of Egyptian women though still in the role of homemaker could own property separate from her husband, which she could sell or manage, including making loans and representing herself in lawsuits. Egyptian women had much more freedoms than her Greek counterpart who were kept out of site and confined to quarters at the back of the house.


The author attributes this to the role played in government by queens who often sat as regents to their husbands and their young sons, or as "Gods wives". Outside of the confines of raising a family and keeping house Egyptian women executed roles as priestesses of gods in temple celebrations or as mortuary priests responsible for the replenishing of offerings to the dead.


Ms. Watterson is next onto love and marriage though there was no religious ceremony but if the couple were affluent enough to hire a scribe a marriage contract was not uncommon. These marriages were frequently arranged with the idea that the marriage would benefit the family and with time love would grow, though falling in love and moving into the man's house was also traditional.


Fascinating material on medicine and in particular women's health and childbirth with a review of the great known ancient medical papyri. These papyri include the oldest, The Kahun Papyrus found by Sir Flinders Petrie and dated to ca. 1880 B.C., the Ebers Papyrus, The Edwin Smith Papyrus, Carlsberg VIII, The Chester Beatty Papyrus, The Ramesseum Papyri, and The Berlin Papyrus which is concerned mainly with contraception, childbirth, and care.


These papyri deal with aspects from detecting pregnancy or repulsing it ensuring a healthy term birth including keeping the pregnant woman's focus on beautiful things so that her child would be born beautiful. A high priority was placed on the determination of the sex of the baby which a number of the above papyri deal with.


The papyri often enlist observations, magic spells as well as repugnant medications to gain the wanted effect.  The Eber papyrus records on a new-born baby's chance of survival: ' If a child's first cry is ny, it will live; if mb', it will die.'


The author is next on to fashion and dress of the Egyptians from animal skins to the development of simple linen and woolen garments with gradients of quality to expense with the pleated splendor of New Kingdom nobles in all grandeur. The simple white linen garment was enhanced by the additions of jewelry which included the beaded broad collars, first in vogue during the Old Kingdom, as well as bracelets and other accessories in metal, stone, faience and even wood.


The practicality and beauty of wigs added expression to the Egyptians style for both men and women while keeping their heads shaved for cleanliness and ritual purpose. We again find makeup and perfumes serving also a practical purpose with eyeliners and shadows shielding the eyes from infection while accentuating the eye line of the wearer.


Ms. Watterson is on to domestic life with the wife's job to keep a clean house raise the kids and prepare the family meals which would include baking and to make beer for her family or in the case of the royal ladies of Mentuhotep II who ate their breakfasts while attendants made the royal ladies up for the day. The author lays the diet of the populace from the mostly vegetarian peasantry to the rich diet of the ruling classes.


The book closes with the women of note who became kings and held power on only a few occasions usually signifying a period of hardship to follow as dynasties disintegrated. The exception was the XVIIIth Dynasty King Hatschepsut, whom herself came to be regent to a young Thutmosis III. The succession to kingship was made easier by the fact she and her court were successors to a number of powerful ruling warrior queens Teteshiri, Ahottep, and Hatschepsut's grandmother Ahmes Nofretari whom herself went on to be deified and worshiped for half a millennium at the royal tomb builders village at Deir el Medina.


Ms. Watterson includes the five gods wives of Amun who reigned at Thebes during the Third Intermediate Period and onto the Ptolemy's closing with the famous Cleopatra upon who's death Pharaonic Egypt came to provincialism. I enjoyed this book very much and found it suitable for ages 10 and up, though the book has limited pictures its interest was well researched and presented on historic personages highly under-represented in the literature both ancient and modern.