Gods and Myths of Ancient Egypt 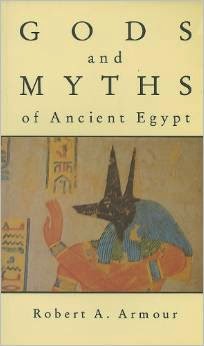 Though my readers will understand that the subject matter is not really my cup of tea, I have been fortunate to find this book recently in my favorite thrift and as it appears to come from a fine press I cannot help resist reading it at once. The book opens with the symbolism of the lotus flower and its appearance at dawn and retreat under the water at dusk.


The Great Ennead and the creation myths are explored beginning with the story of Ra of Heliopolis and his children, Shu and his sister Tefnut, who in turn beget their children Geb and Nut, who in turn beget Osiris, Isis, Seth, and Nephthys. From within this incestuous clan, the earth and all things are created including man through the tears of a god.


The book is amply filled with rather crude black and white line drawings which accompany the various descriptions of these principle characters. Professor Armour's interest in the subject is clearly reflected in the detail provided to the reader in language suitable to a teen and at times providing thought new to this reader.


"At one point a black pig (an animal often associated with Seth) was brutally cut into pieces upon a sand altar built on the river bank. At another time a model of a serpent was hacked to pieces. At another festival, recently captured birds and fish representing the god were trampled underfoot, to the chant: "You shall be cut to pieces, and your members shall be hacked asunder, and each of you shall consume the other: thus Ra triumphs ..."


The author tells the tales of the elderly supreme God Ra from his daily journey across the heavens and nightly through the underworld in his bark accompanied by various lesser deities who fight the evil manifestations of the underworld who seek to harm Ra. To the treachery employed by his great granddaughter Isis who covets Ra's powers.


To gain it she seeks to find out Ra's secret name, so that when the elderly Ra drools on the ground Isis takes possession of the earth and with this clay Isis creates a poisonous snake which bites Ra causing the god excruciating pain. Isis continues to torture Ra to gain his secret name which through the pain he eventually gives.


Ra growing old retires from his position as supreme deity though he retains his power it is Isis' son Horus who becomes the supreme god. The legends of Osiris and Isis are explored with great fluency on a subject most often too simply recounted without its contradictory stories.


Osiris is a beloved king who teaches civilization to his people including agriculture and dam building while Isis is a protective mother with terrifying possession of great magic. Isis' magic causes two of a friend's sons, on separate occasions, to die of terror from the sight of Isis weaving her spells, these sons were not intended victims of the goddess but just happen to observe her magic, while in another case Isis offers to save a queen's incurable son.


"Every day the child seemed stronger, but no one knew what Isis did to help him. Finally, the queen hid herself in the nursery to uncovers Isis' secret, and what she saw shocked her. Isis first locked the door and then built a high scorching flame behind them. Putting the child to the flames, she turned herself into a swallow which flew around and around the pillar making the most mournful twitterings."


The great ages to which Osiris and Isis have passed has left a large body of literature through the Old Kingdom pyramid texts with rising prominence in the Middle Kingdom and the worship at Osiris' tomb at Abydos. As Egypt became provincial the Romans loved Isis creating a body of work of her deeds and as the last of Egypt's gods, she perhaps evolved the most of the gods as her powers became suited from one epoch to another to Roman ideals though Isis remains well known, even today.


It is Horus who dominated the Egyptian religion taking his father Osiris place as King of Egypt after winning the epic battle of the religion against his uncle Seth. Most of Egypt's kings ruled as "The living Horus" though a multiplicity of gods bear the name of Horus such as Horus the Elder, Horus the younger. Horus the child a Graeco-Roman period god displayed as a child with his finger at his lips and a side lock of youth was often depicted on bronze plaques known as the cippi of Horus.


The triad of Memphis consisted of the creator God Ptah, his fierce sister wife Sekhmet and their rather benign son Nefertem. The Apis bull lived its life within its enclosure at the great temple of Ptah in the center of the capital and was seen as a representation of Ptah.


It was believed that Ptah and Sekhmet were the parents of the deified architect of King Djoser's pyramid, Imhotep who became a god in the Late Period being represented on numerous surviving bronzes. The triad of Thebes is next explored with the sacred family being Amun, his consort Mut, and their offspring Khons.


Amun being known as " the hidden one" was a relatively minor god until the Middle Kingdom when the Theban King Mentuhotep II brought the local Amun to prominence. Amun's priests assimilated Ra of Heliopolis' powers and divinity with Amun to create Amun-Ra.


Professor Armour lays down the common biographies usually put forward for the central cast, yet the reader is also presented with the material such as gods who are not part of a triad, with father, mother, child components. The books characters are a pretty standard group but the author has created biographies which take the often two-dimensional figures and mould them into much more complex individuals.


Nowhere is this true more than the depictions of Isis in this book, which is usually limited to her picking up Osiris' pieces and hiding out in a marsh protecting Horus. It is here however within Mr. Armour's fine book that entirely different and sometimes unsettling entities emerge from the Abyss of volumes on the subject making "Gods and Myths of Ancient Egypt" well worth a read.
Posted by Timothy Reid at 2:15:00 PM