The Masterpieces of the Pergamon and Bode Museum 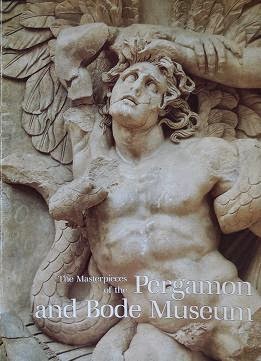 "Since the historic days of November 1989, all the museums in Berlin have been working intensively to remove the effects of the division which resulted from World War II and its aftermath. This is not primarily a matter of reuniting holdings which belong together. Forty years of divided history need to be overcome and this also means the entire museum landscape of the city must be rethought in the light of current scholarship."
Gunter Schade
Director General of the Staatliche Museen zu Berlin 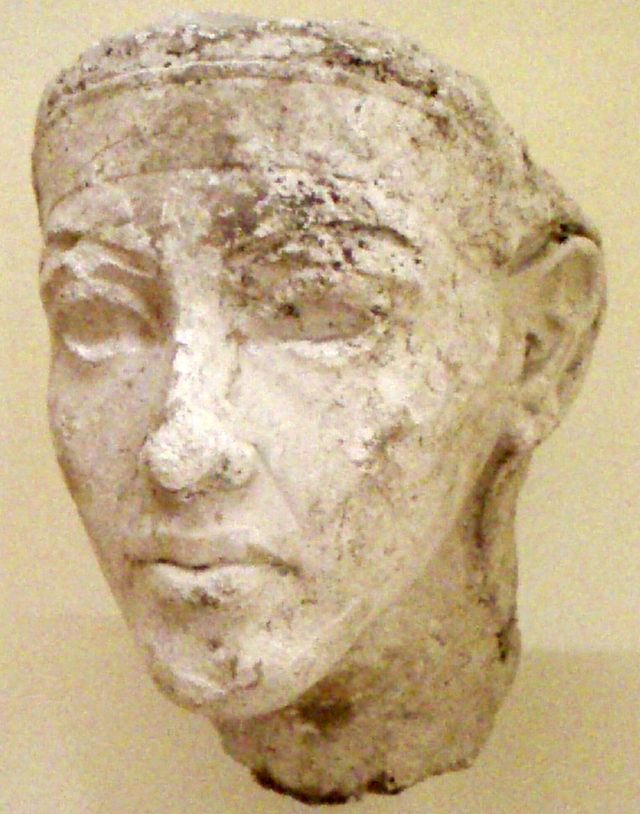 The Bode's collection of Egyptian antiquities is put forward starting with acquisitions in the late seventeenth century and added to through purchases and late nineteenth early twentieth century excavations. The famous Lepsius expedition of the mid 1840's brought three complete tomb chapels back among its thousands of acquisitions and by 1855 the collection was set up in its own beautiful Neoclassic building, the Neues museum on Museum island in the heart of Berlin.


Excavations at the solar temple of Neuserre between 1898 and 1901 at Abu Gurob brought many important V Dynasty reliefs to the collection while excavation finds at Tell el Amarna between 1911 and 1914 brought the Neues its first class Amarna collection. Since these heady days of acquisition however few museum collections have fared worse than Berlin's Egyptian collection.


World War II was devastating to the collection including the Neues museum which lay in ruins after the war, as it would for the rest of the twentieth century. A number of storage facilities holding artifacts of the Egyptian collection were also destroyed including a manor house and storerooms holding another part of the collection were burned in May of 1945 by fanatical Nazi's.


The irretrievable losses include a large proportion of the reliefs from the solar temple of Neuserre, an artistically important collection of coffins and Middle Kingdom paintings. The best pieces of the surviving collection in the Russian sector of the city were taken to Russia until the late 1950's. The remains of the Egyptian collection dispersed according to what part of the city they were found in at wars end with the bust of Nefertiti ended up in the Charlottenburg Museum in the western part of Berlin and only a few pieces being left on Museum Island, these were added to the Bode Museum to create this Egyptian collection.


The guide opens with a calcite statue of an Upper Egyptian baboon god "the great white one" with the name of King Narmer on its base, (Acc. no. 22607). The awkward, cramped statue is said to be the oldest large-scale sculpture from ancient Egypt ca. 3000 B.C. 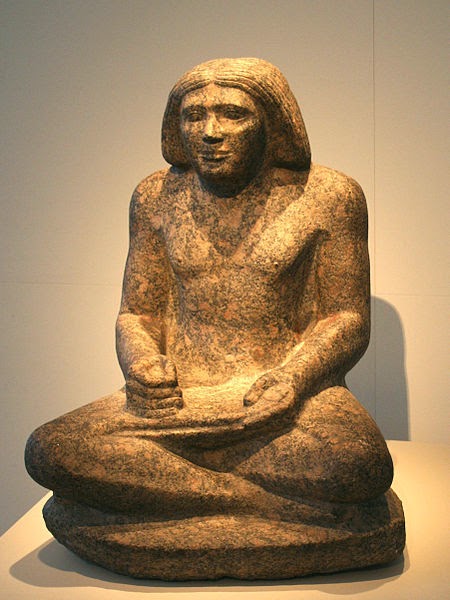 The Egyptian collection presented is meager but includes the wonderful Old Kingdom granite scribe statue of Dersenedj, (Acc. no. 15701), who is pictured with the papyrus on his lap giving his titles of "overseer of the granary" and "domain administrator". A gorgeous relief comes from the pyramid temple of King Sahura, ca. 2440 B.C., (Acc.no. 21782), of prisoners being led by gods before the king.

The reader is presented with two statues of Hatschepsut including one of her as a sphinx in which the head was discovered by the Prussian expedition in 1844 and the body in pieces between 1922 and 1926, (Acc. no. 2299). The museum's holdings do include two Amarna period quartzite heads of a princess, (Acc. no. 21223), and one identified as Nefertiti (Acc. no. 21220), though I think it is more likely Nefertiti's daughter Meryetamun, or perhaps Ankhesunamun, a little too happy to be Tiye or Nefertiti?

The guide does contain a lovely Late Period coffin and an outer trough of Paistenef, (Acc. nos. 51, 52), a nice, but standard survivor from a once great collection of coffins. A series of trinkets including jewels from a pyramid at Moreo in the Sudan and a group of five lovely shabti pass till the viewer finds themselves in front of a very fine greywhacke head, (Acc. no. 11864), thought to represent King Amasis and found in the residence of the XXVI Dynasty kings, ca. 550 B.C. 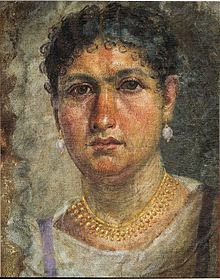 The Roman period mummy portrait from the tomb of Aline from Hawara is a beauty and one of the few of the genre painted on linen, not board. The Egyptian collection closes off with three outstanding papyri including,  "The Persians," by Timotheos of Miletus from Abu Sir and dated at ca. 350-300 B.C., (Acc. no. P 9875).


While Amunemwiya's "Guide to the Netherworld" (Acc. no. P 3127) is a beautiful example of a New Kingdom funerary book belonging to a well-off noble. Of the lost coffin collection, it needs note, "Lid of a boy's coffin", (Acc. no. 17126), is unique and a precious survivor of that collection representing on the lid a statue of the Hellenistic owner. 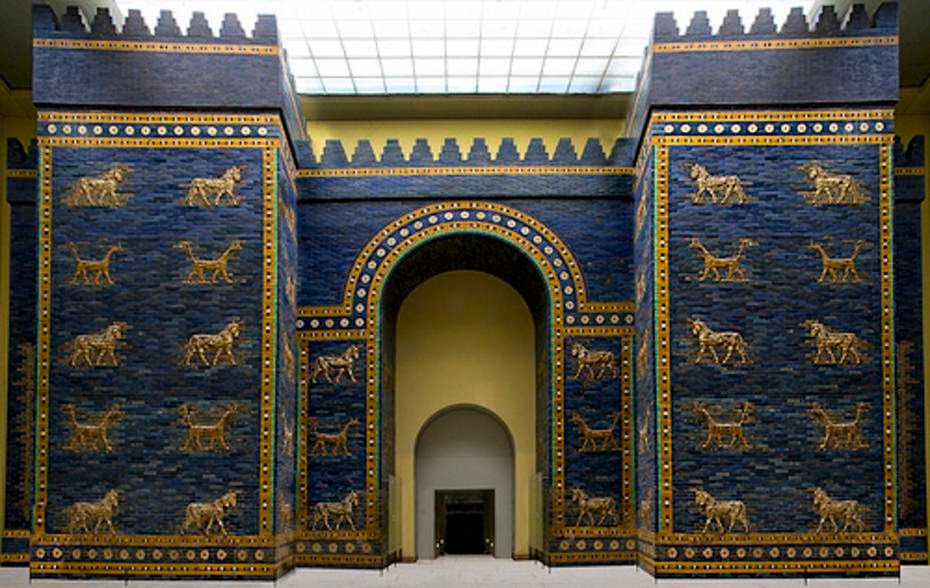 The museum's collection of Mesopotamian material including its Ishtar gate covers 8000 years of history much of which was acquired through nineteenth and twentieth-century excavations that brought objects through the division of finds. The Western Asiatic collection was not damaged during World War II and remained intact with the exception of pieces taken to Russia which were repatriated back to Berlin in 1958.


This collection is unrivaled in Europe with the exceptions of the Louvre and British Museums. From the cella of the archaic temple of Ishtar we find an alabaster figure of a man, ca. 2400 B.C., (VA8142), wearing a long kilt possessing great presence and followed by a number of elegant stone pots and sculptures from the first half of the third millennium B.C.


I fell in love with two small recumbent bulls, one in a green stone, (11021), and another smaller bull in marble with three pointed spots on its body set with carved lapis lazuli inlays, (14536). The wonderful gate of Ishtar is described including its erection by Nebuchadnezzar II, collection, and installment within the Pergamon museum is put forth, as is its replica explained to the reader.


The spear-bearer of the bodyguard of Darius I (521-486 B.C.), (VA14647), like the Nebuchadnezzar II gate aforementioned, is a composition of glazed bricks in colors of black, white, brown, yellow, blue, and green producing a refined detailed image of a guard in a procession of the kings guards. Figure 23, (VAT 10000), displays the obverse of Tablet A of the Middle Assyrian legal code, 12th century B.C. and from Assur, this nearly intact example contains fifty-nine sections concerned mainly with women including laws of theft, sexual grievances, beatings, injury, marital and criminal matters. 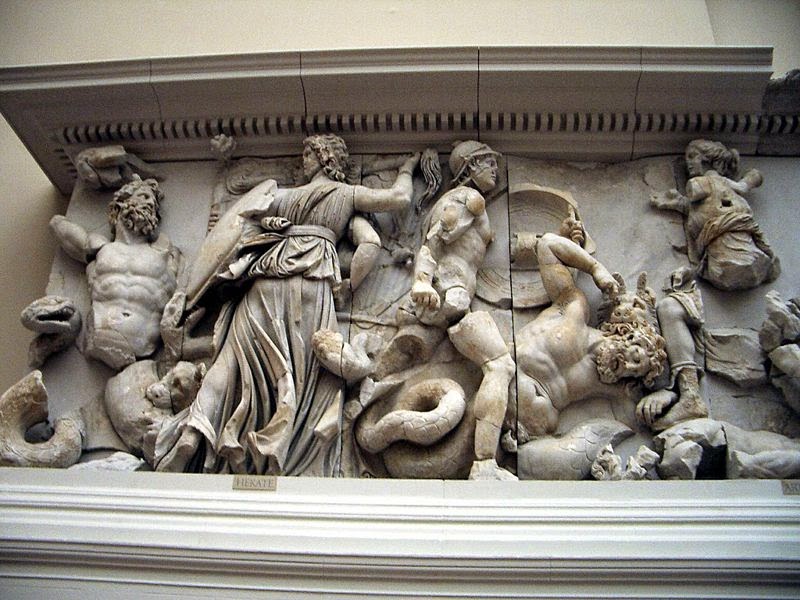 Of the classical collection, a storage bunker containing a large collection of vases, terracotta's, bronzes and unstudied excavation finds burned during World War II with almost the entire contents lost. The beautiful market gate of Miletus excavated by Theodore Wiegand and Hubert Knackfub between 1903-1905 and reconstructed, (with much criticism), in full scale in the Pergamon, was bricked up for its protection during the war.


However, the gate still suffered considerable damage including the destruction of the skylight above the gate and the brick wall meant to protect it, leaving the gate damaged and exposed to the elements for a couple of years after the war. The "Berlin Goddess", (Sk 1800), ca. 580-560 B.C., is an Archaic Greek marble statue 1.93 meters in height and found at Keratea in an excellent state of preservation including some remains of its original paint. 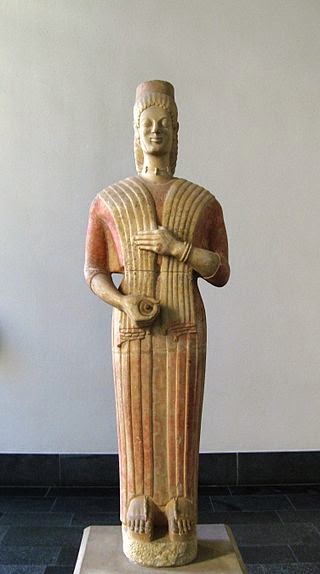 This preservation was brought about because the statue in ancient times was wrapped in a lead sheet and buried. The statue is typical of archaic modeling as it is a severe, rigid composition unlike the slightly smaller headless marble statue of a woman holding a partridge, (Sk 1791), from a few years later ca. 550 B.C., and of which possesses a more fluid and refined early classical style.


So many wonderful and important works from this collection fill the pages from the metope found by Heinrich Schliemann from the Temple of Athena at Troy depicting Helios and dated after 300 B.C., (Acc.no. 9582). The rare life-size bronze "Praying Boy" (Sk 2), from  late 4th century B.C., was found in the Temple of Helios on Rhodes being sent to Venice as early as the 16th century.


The green schist bust of Julius Caeser, (Sk 342), is a rather soulless demonic looking figure with its faded eye inlays and excellent state of preservation. 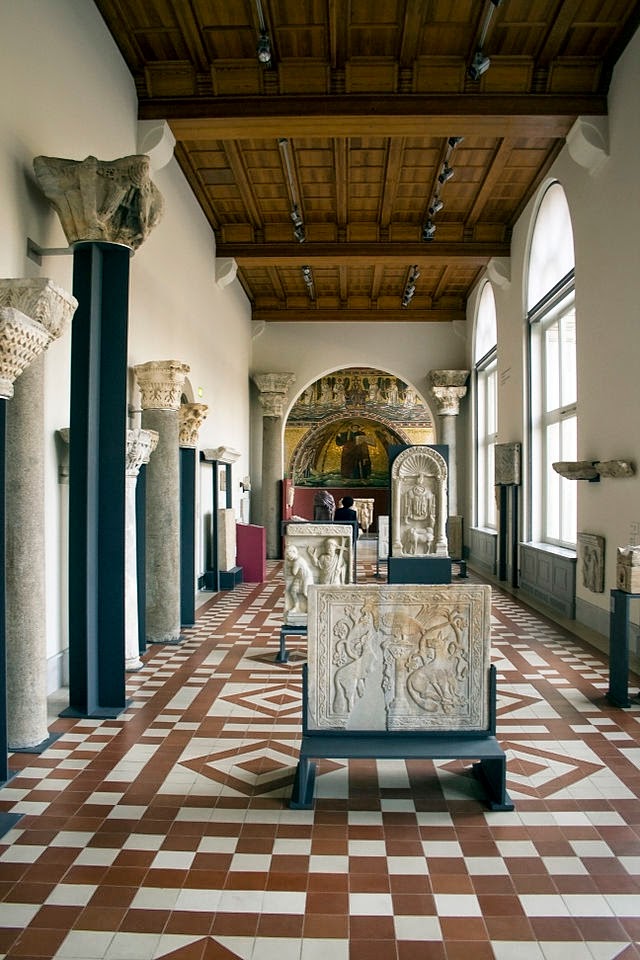 For me the most remarkable piece from this collection is the "Game of marbles" said to have been found near the Hippodrome in 1834, (Acc. no. 1895), and from the end of the 5th century. Carved from a block of marble the game is believed to choose the order of the charioteers, or rather the lanes the charioteers would run in.


I guess I decided to review this guide based on the ever changing events that have guided Berlin's collections and the irretrievable losses that resulted from the last great European war. The presentation of the collections and the museums of Museum Island presented now a quarter century out of date are thankfully due to the reunification of Germany and the rebuilding of its museums in a much more appreciative and comparatively orderly state today.