The Encyclopedia of Ancient Egypt 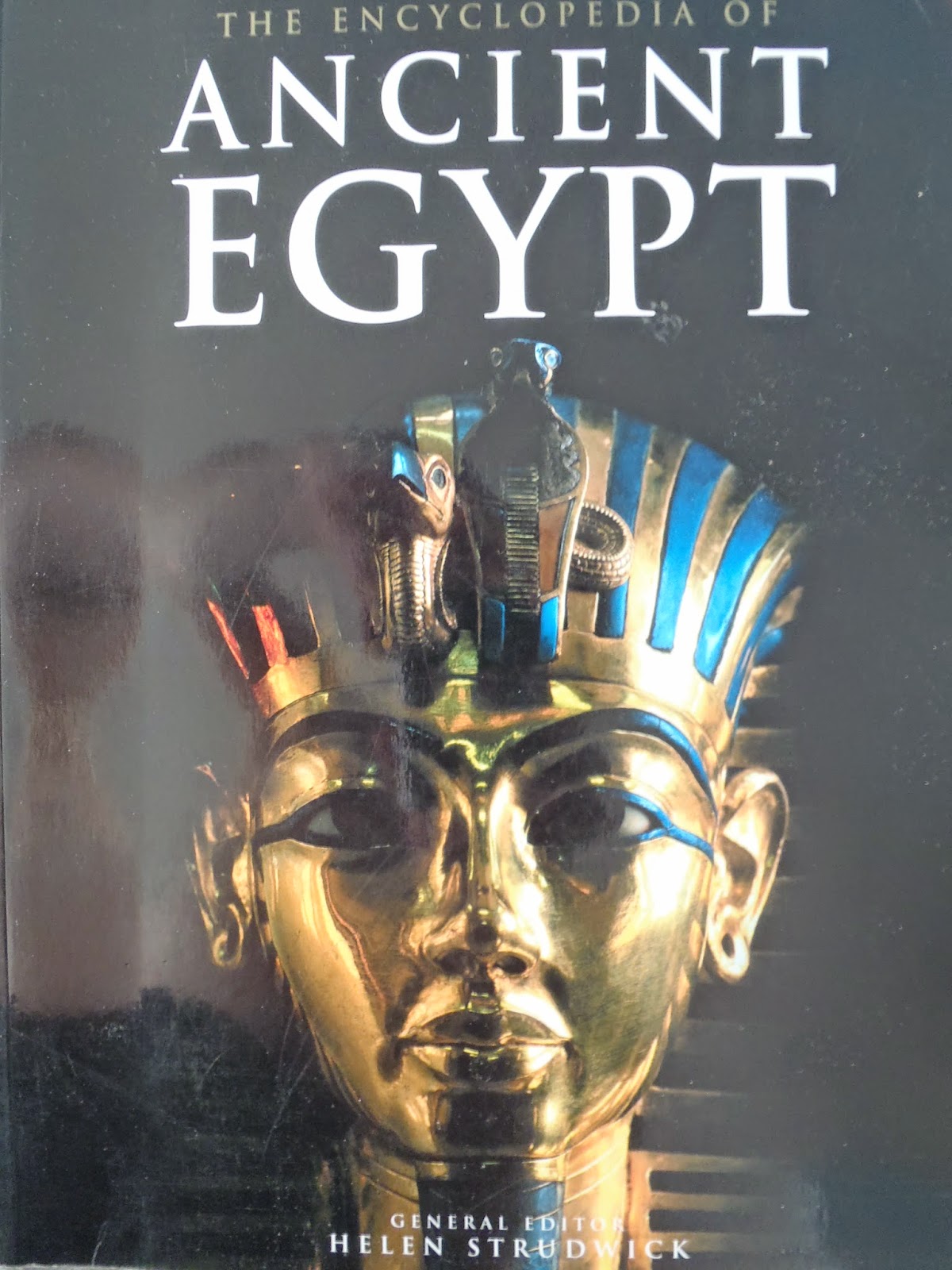 This large, heavy 512-page book opens with the chronology of ancient Egypt of which the colorful pages are filled with small often overlapping vignettes accompanied by brief descriptions of the images and their relation to the theme of the page. Often I criticize this type of formatting as being distracting and ruining the flow of the read, however, in this case, it works as the script is really confined to the page in front of the reader and not relying on turning the next page to finish explanations.


Here is a book simply laid out and certainly suitable for readers 10 and up as long as they can manage the weight of the book. Without the Nile, Egypt would be simply desert but because of the great river, the land has been arable for growing crops and sustaining communities along the river banks.


The reader is presented with thirteen different artifacts from Egypt's Predynastic period on a two-page spread. Impressive are the images of the rarely seen Gerzean period tomb, the oldest painted tomb in Egypt decorated somewhere between 3500-3100 BC.


The reader is told of the discoveries which have helped archaeologists construct the early dynastic period leading to the unification and the establishment of the earliest dynasties. The reader is at this point guided to the bottom of the pages which each kings serekh with his name in it are displayed with a few details, very informative.


With the rise of a stable unified land, the kings of the Old Kingdom harnessed the Egyptian people during the inundation part of the year to building projects including the pyramids of the age. The excesses of the age brought to an end to the power of the god-kings ushering in a period of turmoil.


With the rise of Thebes so follows the history of the Middle and New Kingdoms and the eventual fall into provincial status under the Romans. The read is enjoyable though occasionally there are errors though minor, in one case the reader is told that the royal cache tomb DB320 was emptied in 2 hours and in another case, Hatschepsut's sarcophagus from her tomb in the Valley of Kings is described as made of red earthenware when in reality it's quartzite.


From chronology, the book moves onto the Egyptian gods and all their local, provincial and national identities from Osiris and Isis to Amun-Ra and Serapis of the Greco- Roman world. The primitive nature of the ancient Egyptian religion has a representative for every essence of their world, except for those things which could not be spoken.


The nature of animal cults is explored through the early dynastic cult of the Apis bull, a representative of the God Ptah kept in its enclosure within Ptah's great temple at Memphis and in the New Kingdom buried as gods in the vaults of the Serapeum at Saqqara. The reader is next onto the kings religious duty to the gods in the temples with offerings and various ceremonies enacted by the king and or his priests.


Funerary customs are dealt with from mummification to the necessary equipment and nutrition the dead person would need to sustain and guide themselves in the afterlife. The equipment developed out of the First Intermediate Period include the anthropoid coffin and an idealized mask for the mummy.


The book flows well through subjects of art, dwellings and everyday life of the ancient Egyptian whether common farmer or king and the royal family. The numerous works of art and artifacts come from many museums including the British Museum but of a particular note must be many not usually published objects from Cairo's collection along with the book being filled with many of the Louvre's pieces from its very fine Egyptian collection.


I loved the gamete of material covered from Nefertari's tomb in the Valley of Queens to the Fayum portraits first categorized by the excavations of Sir Flinders Petrie in 1888 which brought knowledge of the earliest portraits of the average people of the first centuries of the common era. The reader is made familiar with marriage contracts and women's rights in ancient Egypt to own land administer business and in a few cases rule.


The arts, sciences, maths and trades, technical or laborious are explored as are the position of those occupants. It would seem that every technical aspect of ancient Egyptian life is explored including the production of food and goods.


This system is well laid out by the various instruments used by the ancient people of the Nile for measuring time along with astronomy creating an accurate calendar and timeline for their civilization and the hours of the day and the rise and fall of the great river. This resulted in an effective taxing system which the yield of crops could be accurately measured to predict their tax value at harvest time.


The reader is presented with the various sciences that include everything from medicine, boat building, textile and papyrus manufacturing, the weapons and their systems of writing from hieroglyphs to hieratic and demotic. The deciphering of the hieroglyphs, how they evolved and a few basic lessons on how to read them are provided.


On the pages of the hieratic script appears an incredible bowl, rarely published and again from the Louvre collection. The book turns from the script to the tools and mediums employed and the men who pursued the calling of the scribe. The book closes with the documents of the temples and those of the coffin texts and administrative recordings.


I have to say for a 512-page book I felt it ended too sudden and could have read more. The book was very informative on so many levels that few other books could layout other than this encyclopedia the details of ancient Egypt and how it functioned throughout thousands of years as a foundation of one of the world's great civilizations.


I liked this book and yes it had its handful of minor mistakes but I found its presentation of thousands of objects and vignettes will make the read easy for all ages and its mistakes readily forgettable.
Posted by Timothy Reid at 3:36:00 PM