Valley Of The Kings 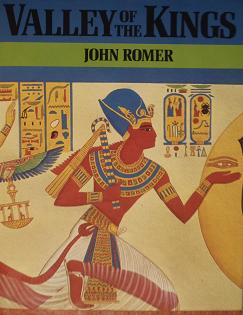 
'The first half of the 19th century was the heroic age of Egyptology, when a year more or less meant whole new worlds of knowledge and discovery for the scholars in Egypt and at their desks in Europe. Letters of dazzling erudition flew back and forth from Egypt to Europe among the charmed circles who were rediscovering the historical order of the ancient kingdoms and their rulers, their arts and the true ages of the massive ruined architecture.'

The book opens with an overview of Upper and Lower Egypt including a map of the Valley of the Kings showing the locations of the sixty-two tombs known at the time of this publication. Mr. Romer puts forward the role of king as the keeper of harmony for his subjects and the development of the king's burial overtime. The conspicuous mastaba and pyramid burials of the Old and Middle Kingdoms afforded little protection from the depredations of robbers.


By the Eighteenth Dynasty, the king's mortuary temples were separated from the tombs which now began being carved off in a closed wadi, the Valley of the Kings. The effect was, however, the same as the people who created the tombs were often the thieves, especially in times of disorder. The king's of the later New Kingdom left Thebes for the cities in the delta and by about 1000 BC the tombs of the ancestor kings were opened with one after another emptied of their extraordinary content.


Through the latter half of the antique world, the Valley of Kings became a tourist attraction to both the Greeks followed by the Romans and by the early Byzantine era the tombs in the valley ceased to be tourist attractions. A thousand years would pass before the royal necropolis and the city of Thebes was again recognized by seventeenth-century travelers.


A number of travelers published details of their visits to the valley though extremely insufficient including James Bruce who famously published a misinterpreted image of harpists he found in the tomb of Ramesses III. It was Napoleon whose invasion in 1798 brought with him the best French scholars to explore the ancient monuments and scientifically record them for one of the finest publications ever put into print.


Eighteen years later a circus strongman and hydrologist entered the silent valley on a mission to collect the pink granite sarcophagus from the now famous tomb of Ramesses III. His name was Giovanni Belzoni and he would become one of the Valley of the Kings most fortunate visitors, discovering a number of tombs including the burial vaults for three kings, the Pharaoh's Aye, Ramesses I, and the finest tomb known in the valley, the magnificent tomb of King Seti I. Belzoni describes his first entrance into King Ramesses abode with visitors he was showing around Thebes.


'Having proceeded through a passage thirty-two feet long and eight feet wide, I descended a staircase of twenty-eight feet, and reached a tolerably large and well painted room, I then made a signal from below to the travellers that they might descend, and they entered into the tomb which is seventeen feet long and twenty-one wide. We found a sarcophagus of granite, with two mummies in it, and in a corner, a statue standing erect, six feet high, and beautifully cut out of sycamore wood: it is nearly perfect except the nose. We found also a number of little images of wood, well carved, representing symbolic figures. Some had a lion's head, others a fox's, others a monkey's. One had a land-tortoise instead of a head.' *


Mr. Belzoni was followed by many other men of note including John Gardiner Wilkinson who painted numbers on the tombs in the valley and Francois Champollion who deciphered the hieroglyphs, and went on to damage Seti's tomb, removing a fresco from a doorway in the tomb. The book contains many drawings and photographs placed liberally throughout the text, often encompassing a couple of full page illustrations.


By the 1870's royal antiquities from a family of Theban high priests of Dynasty, Twenty One began appearing on the Luxor antiquities market and in European museums. These finds included books of the dead, ushabti's and mummy braces for various kings, queens, and princesses’. The robbers had found a tomb containing tens of thousands of dollars worth of antiquities.


It would turn out to be the greatest find of royal mummies ever and included a who's who of the greatest emperors of Egypt's New Kingdom. Present were the sainted mummies of Amenhotep I and his mother Ahmes Nofretari, the first three Thutmoside king's including the great warrior Thutmosis III, also the first three kings of the Nineteenth Dynasty that included not only the great king Seti I, but also his son Ramesses II, the penultimate king.


John Romer imbues his telling with such spirit that it would be difficult to find another author do better justice to the often over-told story of the discovery. The prominent kings are lined up in a salon of the then Bulaq museum, with the rest put into storage until the day they would be divested of their shrouds and bandages, mostly beginning in 1886.


As the nineteenth century comes to a close we find the head of the Egyptian Antiquities service Victor Loret searching the Valley of the Kings for more tombs, except Mr. Loret is not always present, and his workers in the valley do not always inform him when a tomb is found, or at least remove small artifacts from tombs before Mr. Loret enters. This may be true of the discovery of the first intact Eighteenth Dynasty burial of a man named Mahirpra.


Mr. Loret is aware that objects were showing up in European museums bearing the cartouches of Amenhotep II. It has the appearance that his excavators in the valley took their share first, yet just as bad Loret made insufficient notes of his excavations. These losses in the archaeological record hurt even more by the importance of the tombs found being those of king's Thutmosis III, and eventually his son Amenhotep II.


The author follows the order of the tombs discovered creating a thorough rundown of excavations, though these diggings are more of a half hazard hopping around the valley without any systematic order, or governance. In an era where wealthy European's and American's snatched up illegal antiquities and were broadly given permits to dig and keep objects unwanted by the antiquities service, Egypt was swarming with profiteers.


Theodore Davis was such a man, receiving the permit to dig in the Valley of Kings and unearthing major finds just about every year. Among these finds was the tomb of Queen Tiye's parents, Yuya and his wife Tuya. This was the finest tomb found in the valley to date, filled with well-preserved furnishings from the court of Amenhotep III.


The Amarna cache tomb 55 excavated by a number of the top men in the antiquities service, each competent on his own, yet as a group completed the excavation with few records, being an embarrassment to each of them, seriously damaging the historical record of the tomb. Davis having had such huge success in the valley now retired believing it held no more tombs.


The end of Davis's permit gave Lord Carnarvon the chance to take over and begin excavating the site with Howard Carter. This promising site, unfortunately, delivered little to justify Carnarvon's expenditure and soon Carter was asking for one more season. The famous discovery of Tutankhamen's tomb would bring a global hurricane of tourists interfering with the excavation of the tomb, challenging the nerves of Carter and of the archaeologist working for him.

The book ends with a short chapter on the designated names for parts of the royal tombs. More than thirty years have passed since publication and John Romer's must read book remains a valuable, untarnished history in great detail of the romance of the Valley of the Kings.

* Belzoni, Giovanni. Narrative of the Operations and Recent Discoveries within the Pyramids, Temples, Tombs and Excavations in Egypt and Nubia. London, 1822