The Gold of Tutankhamen 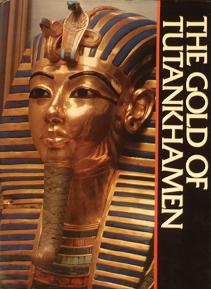 
This menacing size volume is not something I want to have to carry too far being both large and heavy. To Mr. Kamal El Mallakh we owe the discovery of the boat pits he found at Giza next to the great pyramid that contained the two ships belonging to King Khufu. Mr. Arnold C. Brackman was a prestigious journalist who wrote a number of books on a variety of subjects.


The preface of the book is written by eminent Yale University Egyptologist William Kelly Simpson former curator of Egyptian and Ancient Near Eastern Art for the Boston Museum of Fine Arts. Professor Simpson writes of the remaining archaeological environment containing evidence denuded by centuries of robberies, as well as the expectations the modern observer places on the contents of Tutankhamen's tomb. It is within the artifacts found with the king that must tell the story as regrettably there were not the expected documents of the king’s reign within his burial.


The book opens with a background to both Lord Carnarvon and his excavator Howard Carter including the eventual contract agreed by the two men. Too Carter as a teenage artist of talent there came an opportunity to use his craft in Egypt working for the Egypt Exploration fund. Carter developed his skills in archaeology living rough in with Flinders Petrie at Tell El Amarna, while the rich aristocratic Lord Carnarvon whiled away his days in the societal adventure without cause.


While driving his motor car in Germany Lord Carnarvon was confronted by two carts blocking the road resulting in an accident which left him with serious burns and broken bones though fortunately to his admirable relief and concern he had not killed anybody. To recover Lord Carnarvon left England to winter at Luxor where he was introduced to now professional archaeologist Howard Carter.


The text contains a fine telling with many knowledgeable anecdotes of interest, though disheartening as a number of familiar stories are co-mingled with other events and locations. The author is certainly in possession of important events in Egyptology but clearly lacks a background on the subject, being unfamiliar with the landscape. The reader is told that after Howard Carter's men dug out the sixteen steps leading to Tutankhamen's tomb the excavators found a sealed wooden door when in reality it was a plastered wall.


A respite is taken from the text for a number of pages containing a standard content of black and white photographs. With the discovery of the tomb, the world descended upon Luxor creating a circus-like atmosphere with Howard Carter having to take time from his work to host a who's who of the international elite and press. The latter, including the Egyptian press, being denied from reporting due to an exclusive given by Lord Carnarvon to the London Times.


"Fear spread in the Valley that a rarity of rarities-a rainstorm-might erupt and send tons of cascading water crashing through the chasm and into the open tomb. European and American newspapers, not privy to the London Times' reports, played up the angle. A New York headline read: "PANIC SPREADING/ GRAVE POSSIBILITY/ PRICELESS ANTIQUITIES/ MAY BE HOPELESSLY DESTROYED BY TOMORROW."


It does no favor to judge this book by its incompatible irregularities alone, but also it must be viewed with the nature of the book in its minutia of detail and conveyance of mood created by the international excitement of the discovery of Tutankhamen's tomb. The text presented that flavor of the times complete with superstitions and the rising nationalism of Egypt's populace.


Arriving in the middle of the book we come to the second half concerned with the color plates and the notes of each section of plates further on. This may require the reader to use two bookmarks to view properly. The objects of Tutankhamen chosen by Mr. El Mallakh were positioned especially for the photographs in the book, except of course those of the tomb itself.


The objects chosen begin with the king’s famous gold mask pictured on three stunning full pages from different angles. Two of the kings coffins are next complete with multiple views of both that include an image of the underside of the foot of his innermost coffin. At this point I have finally come to the part I have been craving to get to, Tutankhamen's shrines.


My first look through of the book I could see all the amazing material presented on the shrines which surrounded Tutankhamen's sarcophagus, the vignettes possessing some of the great works of Egyptian art. The large wondrous image of Tutankhamen's mummy in the Netherworld on the exterior left panel of shrine II presents him as "He who hides the hours".


'In this image, the figure seems to be immobilized by circles around both the head and the feet by the serpent Mehen, the Enveloper. In the center of the mummy, the disk containing a ram-headed bird with human arms raised in adoration symbolizes the night sun. It is being pulled from the body with a rope held by the figures of deities at left with arms raised, an action which is believed to mark the passing of the night hours.'


On the outermost shrine, the rear interior panel contains the Divine Cow, an image I have never seen before, as is true of many of the vignettes beautifully presented in full-page color photographs. The book moves onto a section of photo's titled "The Young King", beginning with the wooden head of Tutankhamen rising from a blue lotus. This section presents the many statuettes and images of mainly Tutankhamen but also his queen Ankhesenamen found in his tomb.


One of the most amazing discoveries among the contents of the tomb includes the discovery of a complete, or near-complete funerary assemblage of a pharaoh of ancient Egypt. The enigmatic funerary couches, the kings life size ka sentinels, the Anubis shrine and the canopic emplacement all in an excellent state of preservation being either completely unique or the finest of surviving examples.


Though the king was hardly old enough at death to have been a great warrior he is represented as such on many objects in the burial. The king treads on his Asiatic and Nubian foes which are represented on his footstools and the soles of his sandals, including on a ceremonial shield. Among the kings jewelry is a rarely seen necklace composed of faience and gold beads with a ball of black resin at the back and a reversible large faience udjat eye hanging from the front of the piece.

The left Eye of Re represented the bark in which the sun traveled during the day and when worn as a right eye represented the sacred vessel of Re-Harakhti that traveled through the Underworld at night. The items of the king’s jewelry are mostly created using hieroglyphs to give the pieces symbolic messages, but in the case of a pair of the pharaoh’s earrings they possess no symbolism but are spectacular in that they are made with purple gold, created by mixing iron with the gold, this in the early days of Egypt's entrance into the Iron Age.


The early mistakes in the unusual text are unfortunate, though I would be inclined to not judge those mistakes too harshly as the reader is bound to have them corrected in the next book they read on the subject. It is for me the second part of this volume which is particularly special in its photos and which separates 'The Gold of Tutankhamen' from the huge amount of books on the king and his tomb.

* United States Secretary of the Treasury
Posted by Timothy Reid at 9:23:00 PM