The Tomb of Nefertiti 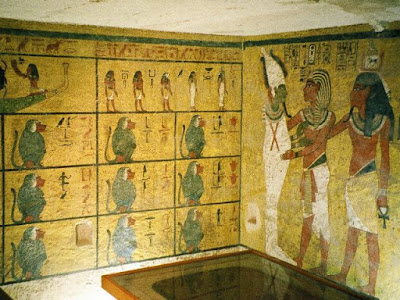 Well, all is set for Egyptologist Nicholas Reeves to investigate Tutankhamun's tomb hoping to find a doorway behind one of two walls or both. Mr. Reeves believes that Nefertiti's burial chamber may be behind one of them. This theory coming from such a respected man has caused great excitement not only in archaeological circles but in the mass-media as well.

In fact, there are a number of candidates who could be behind the walls of Valley of the Kings tomb number sixty-two. First, a couple of people we are unlikely to find including Tutankhamun's mother who has through DNA been found in the famous Valley of the Kings royal cache in the tomb of Amenhotep II in 1898.

Giovanni Belzoni discovered in the valley tomb KV 21 in 1816 two well preserved female mummies, these mummies have since been destroyed. The headless remains of one of them known as KV21 A, is also through DNA likely to be Tutankhamun's Queen Ankhesenamun, as at least one of the fetuses found in his tomb is the child of KV21 A. In the Valley of the Kings most controversial tomb were found the remains believed by some, including myself, to be that of the heretic King Akhenaton. Again the DNA suggests that the mummy is Tutankhamun's father. So with mom, dad and wife already discovered, who are the missing.

King Smenkhkare's burial equipment occupies some of the most prestigious of objects from Tutankhamun's burial, artifacts found not only in the tomb but intermingled fragments of objects found in the fill of KV62's steps. If King Smenkhkare is behind one of those walls it might be suggested that his/her burial might be modest, that or completely ruined.

Who can say if Nefertiti in homage to the great ancestor Hatschepsut, had herself declared pharaoh ruling as Smenkhkare along-side Ankhenaton in his last years? This might have been rectified by King Aye who is painted administering the "Opening of the mouth" ceremony onTutankhamun's mummy. Aye may well have returned Nefertiti's burial to the status of queen.

Having said that it must be remembered that the KV55 mummy did not appear to have been unwrapped when found, only its mask was removed and perhaps restyled for king Tut. I suspect that if Nefertiti is behind one of the two walls that her burial will be modest in valuables, but providing that her mummy was not robbed in the transfer of royal burials from Tell el Amarna, I suspect that she will be intact though there will be little gold outside the mummy, and major missing pieces from her burial. 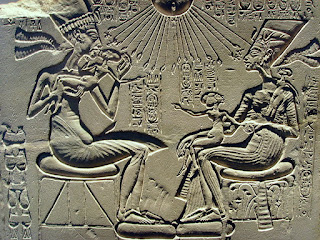 In the royal tomb at Akhenaton's capital are to be found carved reliefs showing the funeral of Akhenaton and Nefertiti's daughter Meketaton. Should Nefertiti be found I would suspect so will be found the mummy of this royal child reburied with her mother. The same rules apply to the transfer to Thebes of the royal dead except the little princess's burial is more likely to be a complete ensemble.

The lost Amarna mummies include the oldest daughter of Nefertiti, Meritaton who was a powerful queen in her own right and among those presumed addressed in the Amarna letters. Princesses Neferneferure, Setepenre, Neferneferuaten Tasherit, and Ankhesepaaten-Ta-Sherit, the daughters of Nefertiti remain to be identified, though there is a chance that one of them may be represented by the remains known as KV21 B, found with the presumed remains of Ankhesenamun.

I would go even further that KV21 B would perhaps be most appropriate if the mummy was not a princess but a queen making KV21 the tomb of two queens including Ankhesenamun's oldest sister, and only other queen of the daughters of Akhenaton and Nefertiti, Meritaton. This would be backed up by the position the arms of both mummies were in when found.

How many ladies may be found might be foreseen by the contents of Valley of the Kings tomb KV63, an Armana period cache of embalming refuse. Mr. Reeves may be on to the burial of Nefertiti but also the mummies of her lost daughters.