The Life & Times of Cleopatra Queen of Egypt 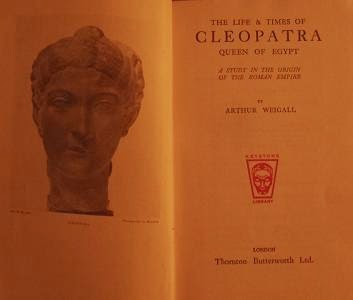 "You shall not tell me by languages and titles a catalog of the volumes you have read. You shall make me feel what periods you have lived."


This attractive book comes with three foldout maps, some black and white pictures being originally published in 1914. The author Arthur Weigall is perhaps best remembered for his work in the excavation of Egypt's Valley of the Kings tomb 55 which some believe contained the mummy of the Pharaoh Akhenaton.


The book opens with a look at Cleopatra's character which has been much laid out by Rome and those who might be less than sympathetic to the young Ptolemaic queen as to see her a temptress rather than a young girl manipulated by the much older Julius Caeser, who possessed a long history of womanizing. The young queen is remembered as a doting mother to her four children including twins and the dynasty's heir Caesarian.


The reader is made acquainted with the city of Alexandria, its monuments, layout, and populace of Cleopatra's time, the character of which is more European than Egyptian. We are told of the Ptolemaic royal family that they were a little dysfunctional,


"Ptolemy III, according to Justin, was murdered by his son Ptolemy IV, who also seems to have planned at one time and another the murders of his brother Magas, his uncle Lysimachus, his mother Berenice, and his wife Arsinoe." "Ptolemy VIII murdered his young nephew, the heir to the throne, and married the dead boy's mother, the widowed Queen Cleopatra II, who shortly afterward presented him with a baby, Memphites, whose paternal parentage is doubtful. Ptolemy later, according to some accounts, murdered this child and sent the body in pieces to the mother. He then married his niece, Cleopatra III; and she, on being left a widow, appears to have murdered Cleopatra II. This Cleopatra III bore a son who later ascended the throne as Ptolemy XI, whom she afterward attempted to murder, but the tables being turned she was murdered by him."


This familial behavior goes on but if this is not bad enough our Cleopatra VII finds herself at 18 married to her 10-year-old brother who is surrounded by the most powerful of the palace staff and soon finds herself in flight for her life. The arrival of Pompey the great to seek refuge in Alexandria places King Ptolemy and his men in a difficult situation of taking sides against Julius Caeser by welcoming Pompey who has just lost a battle against Caeser on the plains of Pharsalia.


The solution for the Ptolemaic court out of this conundrum is the murder of Pompey complete with decapitation, an act which is not entirely pleasing to Caeser.  The character of the elderly Caeser is examined including the bedding of many of the wives and daughters of his fellow men.


"He had no particular religion, not much honor, and few high principles; and in this regard, all that can be said in his favor is that he was perfectly free from cant, never pretended to be virtuous, nor attempted to hide from his contemporaries the multitude of his sins. As a young man he indulged in every kind of vice, and so scandalous was his reputation for licentiousness that it was a matter of blank astonishment to his Roman friends when, nevertheless, he proved himself so brave and strenuous a soldier."


The relationship between Caeser and Cleopatra is viewed as the young queen who's position at the Alexandrian palace is shaky against her brother and his men and who conspire to rid Ptolemy of his sister. Unfortunately, for them, Caeser destroys the conspirators including young Ptolemy who is sent to his army to die in a vain effort to recapture the palace and his throne.


With Caeser's men in control of the palace and Cleopatra's position on the throne secure Caeser stays until Cleopatra gives birth to his son, Caesarian. After months of pleasure in Egypt Caeser now returns to Rome and his ambitions found there, though he is soon followed by Cleopatra, who together plan an Egyptian-Roman empire with Caeser and Cleopatra ruling as king and queen.


These ambitions are a threat to Octavian and the senate of Rome who's members thwart these grandiose thoughts and kill Caeser sending Cleopatra packing. The standard story has it that the death of Caeser brings on Antony in Cleopatra's life as Caeser's replacement in his and Cleopatra's dynastic ambitions.


Cleopatra employs her enormous wealth to impress on Antony with costly parties and extravagances including dissolving a valuable pearl in vinegar as a drink for herself. Antony has a reputation as a bit of a wine lover, being always up to a practical joke and less refined than Caeser, none the less a lonely Cleopatra finds love for him and a renewal of her ambitions.


Like Caeser, Antony spends a little too much time in Alexandria in a state of opulence he had never known leaving the queen to give birth six months later to twins. Yet it would be three and a half years later before Antony would return to Cleopatra and not before marrying Octavian's sister, Octavia.


This absence had left the Egyptian queen feeling used and discarded and perhaps wiser to Antony's fleeting charms. The author sees the queen as a lonely, solitary figure vulnerable to the older men who court her alliance with passions.


The reunion of the two brought Antony willing to hand over large territories to Cleopatra's realm while she would supply money and resources to the goal of world domination. These fantasies being dispelled in Antony's defeat in his war on the Parthians after which he would be convinced by the queen to forget the Orient instead seek to attack Octavian directly.


Now reaching middle age Antony's drunken antics had begun to tarnish him in the eyes of Cleopatra who in her own paranoia began to loose respect for his rationalizations and his sincerity towards her. Cleopatra herself had matured into a shrewd politician who could converse in many languages to foreign rulers and with enough wealth to impress them all in luxury.


As the events unfold at Actium it is not the great young Antony present but a dramatic actor enlivened and drawn out by years of debauched living who presents the worst qualities of a man in his flight from the battle, abandoning his forces to chase the queens boat, in his moment of death he does the worst thing possible, he lives. The next couple of years Antony burdens Cleopatra with his presence, and she builds him a villa away from the palace on a nearby island and calls it the Timonium where her husband can seclude himself behind the villas walls.


Cleopatra herself is at the height of her abilities, and though Octavian is slowly making his way with his army to conquer Alexandria she is cementing her alliances with the powers of the oriental world. She sends her son with Antony, Alexander Helios to Media where he is to someday be king of that country by marrying that king's daughter.


Caesarian now a man of 17 is sent with the retinue and a huge sum of cash to live in India until the time when it is safe for him to claim his Egyptian throne. The final blow to Cleopatra's dreams of dynastic succession come when hers and Antony's forces are faced at Alexandria by the forces of Octavian.


With the Roman presence in the city the Egyptian forces change sides and join Octavian's army rallied against the queen and her pathetic lover who finally kills himself. In the end, the dreamed of Egyptian- Roman dynasty is in fact formed but at its head was to be found Octavian who soon becomes Augustus King of Upper and Lower Egypt.


Arthur Weigall's interpretation of these historic events is well researched and presents the queen in a light that frees Cleopatra of villainy while representing her as sympathetic and at heart under her royal concepts as fragile as any other woman and perhaps if not certainly stronger than many of the men she encountered.


Though I have read too many books about this queen, likely one of the most overwritten about historical figures, I can say that I did enjoy "The Life and Times of Cleopatra Queen of Egypt".

"History", said Emerson, "no longer shall be a dull book. It shall walk incarnate in every just and wise man."
Posted by Timothy Reid at 6:19:00 PM