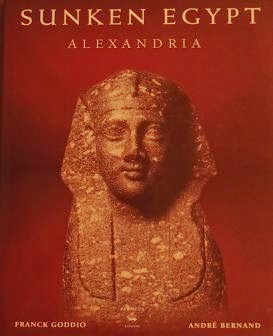 This handsome volume is large but not unruly, the size rather is an enhancement to the many beautiful colored pictures within. The book opens with an introduction to Mr. Franck Goddio and his background including the preparations made in order to do the job put before him.


We find the history of archaeological work which predates M. Goddio in the harbor of Alexandria and are presented with a number of maps created of it from the 18th and 19th century including a current map. The author introduces members of the team, their specialties and technologies including how they work, unfortunately.


The technical detail appears in minutia throughout the text, detail that I would have expected in the scholarly publication but not in a mainstream book. If you are a scuba diving scientist who enjoys archaeology this book may be for you.


This maybe a little presumptuous on my part as sadly I am only half way through the book. Truly the pictures are wonderful but the read has been very dry so far and probably unsuitable for a young person or an old person.


The second half of the book is "The Portus Magnus of Alexandria", gone is the technical jargon replaced by a look at the finds accompanied by text descriptions in ancient times of the site. The maps are helpful in envisioning the layout of the ancient harbor while the pictures are a ghostly assemblage of objects testifying to the sites lost importance.


I loved the Ptolemaic family tree on two full pages from Lagos and Arsinoe to Caesarion, a murderous bunch indeed. The archaeological sites within the Portus Magnus are individually examined beginning with the island of Antirhodos.


Exceptional finds certainly include any inscriptions which are thankfully presented and interpreted for the reader. I particularly found interesting the story of Caracalla and the telling of the slaughter of the Alexandrian's by that Emperor's forces.


The author deals with among the most beautiful artifacts found the statue of a priest of Isis found laying near two sphinx's. We are told about the Portus Magnus coastline in ancient times and are introduced to two remarkable animal statues which include a very unusual coiled snake.


A number of other sculptured stones and columns are identified and fitted into the ancient landscape of the Ptolemies including many reused blocks from ancient Heliopolis. Particularly of interest are the inscriptions gathered from the harbor floor and a colossal head.


The author talks about the buildings which historic writers mentioned as part of the ancient harbor complex, these include the Timonium, Poseidium, and numerous ports. The book ends with a chapter on the Pharos, Alexandria's famous lighthouse, the chapter is a good read on this one of the ancient seven wonders of the world.


The conclusion is an impressive array of accomplishments by Franck Goddio and his team which will no doubt be discussed by archaeologists long into the future.


I knew from the beginning of the book that it would not be for a child and this was confirmed by part one which due to my lack of interest in the minutia of technical information, I was unable to appreciate. Part two was an entirely different and enjoyable read with important historical documentation presented.


This book will be a treasured addition to my collection filled with the best information on the harbor and its monuments, a volume I will definitely never read back to front again.