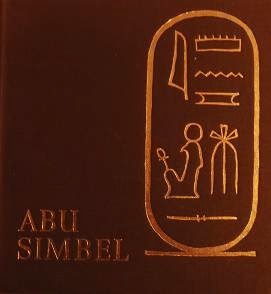 The book opens with a nice forward by Dr. I. E. S. Edwards who explains the character of the great King Ramses II and his monument to himself at Abu Simbel as well as the rescue of the temple from the rise of the water from the building of the high dam in the 1960's.


This nice size book is easy to handle and read plus it is filled with many large pictures often occupying whole pages. The author puts forward his knowledge of Egyptian history well but it is pretty standard material though mixed with some really nice images clearly the pictures are a great enhancement to the text.


On page 45 we find a photo of a young man sitting on the edge of a stone sarcophagus one of four pictured and is described by the author "Stone coffins recovered from the cache of royal mummies found in the tomb of Queen Inhapi at Deir-el-Bahri. Perhaps Ramses lay in one of these before being moved to Cairo Museum in 1886."


I can think of four things that are wrong with those two sentences, stone coffins were not recovered in the royal cache which contained the mummy of Ramses II, the tomb is that of Pinudgem II, the Cairo museum did not exist in 1881 or 1886, the mummies were removed to the Bouloq Museum in 1881.


Page 67 brings a beautiful color picture of a simple Moslem grave complete with inscribed stela and offerings. There is a wonderful black and white picture of a street scene from a town in the Wadi Halfa, the town now under lake Nassar. On page 72 Ramses IV is described as being Ramses II's grandson this causes a problem since Ramses III's father was Setnakht, not Ramses II.


Such a letdown to see all these excellent images accompanied by text that is shaky at this point and yet still another rare image, this time, it is an unfinished rock carving of the Viceroy of Nubia, Yuny near the Abu Simbel temples. The pictures inside the temple include the wall of the temple's holy of holies next to the broken remains of the God Ptah show decoration which is crude and rarely seen.


No one will claim the decoration of the temple is of high quality, much of it is anything but with some exceptions while Nefertary's temple interiors are even cruder with much of that temple's interior incomplete. The author discusses the imagery of the decoration with the standard smiting scene and statues of the family.


In chapter four Mr. MacQuitty deals with the coming flood which will engulf the temples as the high dam at Aswan is built and accompanied by an amazing set of pictures of the construction of the dam. Various countries put forward ideas to save the temples including surrounding the temples in concrete boxes and using hundreds of jacks to raise them.


The book ends with a look at Ramses tomb in the valley of kings as well as Nefertary's crumbling tomb in the queens valley. The books Appendices is on the various schemes to save the temples and an explanation of the cartouches of Ramses II.


The text contained a number of flaws as mentioned above and became confusing with the statement that Nefertary was a daughter of Ramses who married her father before the beginning of his reign, that's news to me and not good news. This saddened me as the read was short and simply perfect for a teenager with an awesome set of pictures that should have belonged to better text.


The flaws in the text were more than outmatched by the excellent images and though there were mistakes they were not enough to remove from my collection these priceless images of an amazing project to better the future of the Egyptian agricultural system, people and the archaeological site forever changed at Abu Simbel.