Mummies A Voyage Through Eternity 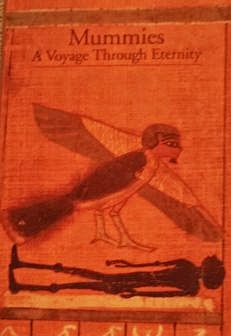 This small colourful book opens with full page head shots of nine mummies from the necropolis at Duch excavated by the Institut Francais d'Archeologie Orientale in Cairo. Both authors have been involved with these excavations Francoise Dunand has directed these excavations since 1983 while Roger Lichtenberg has been in charge of X-raying, anthropological and palaeopathological studies on the mummies of the Duch necropolis.


It is hard not to like a book that illustrates the text as the pages are pretty equally shared between images and a basic rundown on the history of mummification. It is not until page 75 that I hit the first mistake but this is an error in text and not author content.


The book is easily appropriate for a young person and can be read in only a few hours. Particularly interesting are three images of a ram mummy from Elephantine being unwrapped and the image of the mummy of the "Embroideress of Antinoe".


Pages 84-85 are two pictures of Rameses II they are interesting images if not slightly strange views of the mummy. The authors finished the book off well with the available techniques we have today to study mummies without destroying them.


Images from the excavation at the Duch necropolis were some of the books highlights. The book closes with "Documents", a round-up of some of the more interesting ancient documents as well as by 19th-century investigators.


It is fitting that the book closes with a report on the work being done by Francoise Dunand and Roger Lichtenberg at the necropolis at Duch. Mummies A Voyage Through Eternity" was short, colorful and informative a good read all round.