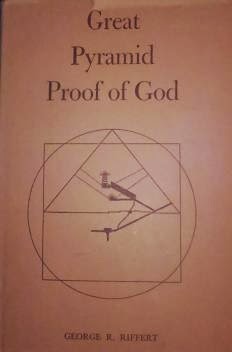 
Once again I find myself reading another book on the great pyramid of Gizeh being a bible in stone. This theory was very popular in the 19th century and including my copy of this book being the 1960 12th impression.


Many scholarly men have put forth this view as the pyramids measurements and astronomical alignments are reported to support a Christian God that has left a message within its stones.


Mr. Riffert sets the reader out with an overview of the battle between science and faith, measurements and miracles. But it is within the continuous stream of measurements that can be made difficult to grasp and follow. The author describes the great sphinx on the Gizeh plateau nearby


"Gigantic in size, grotesque in appearance, a composite creation representing the body of a lion, the wings of an angel,and the head of a woman."1


Mr. Riffert goes on to put forward in the pyramids construction "we know that they operated bronze saws having hardened teeth set with sapphires." The author goes further "In other instances, the cutting edges must have been set with diamonds."2


The authors passion is felt if his preceding facts about the sphinx and the construction of the great pyramid were not so laughable though I have spent many hours contemplating his thoughts because the message has an underlying truth particularly if his words are viewed as parables. The pyramid is known to have been created during the reign of Cheops, the author talks about dates for its construction with some suggestion that the pyramid was built 300 years before the biblical flood and that it survived this event without damage.


The reader is informed of the opening of the pyramid in A.D. 820 by Al Mamoun who found it empty with no sign of a burial backing up Mr. Riffert's belief that unlike all other Egyptian pyramids Cheops pyramid was not built to house the corpse of Cheops but that rather the pyramid is a message.


Mr. Riffert believed it was beyond doubt that the Egyptian people could not have built it. We are told of Shepherd kings who invaded Egypt during the kings reign caused Cheops to surrender and become a vassal to the Shepherd king?


To the author this mysterious king is the architect of the great pyramid and he believes that this is the biblical patriarch Enoch and that Enoch lived the exact length of a solar cycle being 365 years. Mr. Riffert talks allot of the Egyptian book of the dead including that in it the pyramid is called the pillar of Enoch?


Interesting as he gives a quote from Reverend Seiss who wrote his book on the subject 50 years earlier.


"Lepsius tells us that the whole land was full of temples, filled with statues of kings and gods,their walls within and without covered with colourful reliefs and hieroglyphs," "all uniformly loaded down with these idolatrous emblems and inscriptions, and in all it's long avenues, grand gallery, and exquisite chambers, in any department or place whatever, there has never been found one ancient inscription or slightest sign of Egypt's idolatry! In the center of the intensest impurity, the great pyramid stands without spot, blemish or remotest taint of the surrounding flood of abominations - like the incarnate Son of God, sinless in a world of sinners."3

"The Einstein theory of "relativity" is apt to become quite a meddlesome affair because of the manner in which it may muddle things for science."4 From here we venture back into the numbers or I should say measurements as the authors individual points become lost in fractions and numerology?


Darwin's theory of evolution is the author's next point in that he does not doubt the fossil record but that the record according to Darwin and his believers damages mankind's access to gods miraculous revelations that have been given to the people and the author is without the ability to see biology as evolutionary and that in fact his evolutionary example is far too simple, when the animal goes from worm to fish to amphibian to lizard to ape to human as preposterous.


The author perceives that evolution is not always the property of the strong but often it is the perceived weaker evolutionary step that survives? The author heads into the famous 1924 trial of Leopold and Loeb, a pair of teenage thrill killers from affluent homes.


The boys lawyer Darrow removed their responsibility for the crime based on the theory of a violent ancestor who passed this character down to the boys, and that in fact because of this meant that the boys parents were more responsible for their crime than they were.


What this has to do with the great pyramid and proof of god is beyond me though mildly entertaining. Mr. Riffert has left his pyramid argument to delve into the realm of morals and sin in an effort to rebuke Atheism which appears to be the authors underlying battle.


As we approach the end of the book it appears that the authors argument for the proof of god is that the atheist must first acknowledge god in order not to support the idea of god? Mr. Riffert goes on with his numerology.


The author quotes a plethora of people that did not add to his argument as true too to the many references to the Egyptian book of the dead which the nature of that document Mr. Riffert appears unfamiliar with.


Off the start, the books title set the bar impossibly high for me though the author's telling of the theory had its highlights and to the authors credit his telling has omitted the earlier offensive belief in the "Jew's chamber".


Certainly, for me, Mr. Riffert's beliefs were more involved in miracles and the reputing of atheism. The author lacked the graces of his forerunner Reverend Siess and by no means did I find in the "Great Pyramid Proof of God".