Rebel in the Soul 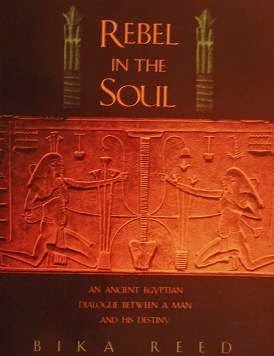 Egyptologist Richard Lepsius bought the papyrus in 1843 from the Athanasi collection bringing it to Berlin. The document preserved on the papyrus is the only known copy and is missing it's beginning.


The papyrus is a philosophical tale to initiate priests into the inner temple. The content of the papyrus is suicidal in nature as a man argues with his soul. This short book is not an easy read and definitely, will not be enjoyed by a child.


The book opens with the history of Berlin papyrus 3024 and of its various expert's translations. We are next on to the authors translation:


"I spoke to my soul

I replied to what it had said:

this I cannot bear

My soul replies not

Indeed, worse than anger is this indifference."


On the facing page a full page picture in black and white in which the whole book has been printed and cleverly printed also in faded shades of gray. The 155 lines of script in Berlin 3024 pass quickly and we are on to a breakdown of the characters beginning with the rebel.


The author talks about the Egyptian book of the dead and its terms in relation to papyrus 3024. The soul is next and finishing the section with "An Offering to the Temples".


In this interesting section, the author compares the translation of Berlin 3024 by Egyptologists R.O. Faulkner next to the translation used in this book as well as dictionary meanings of the hieroglyphs. The difference is quite shocking though at some points it is a matter of replacing words that are no longer in the lexicon such as thy, thou and wilt.


In the "Commentary" section Ms. Reed breaks down papyrus 3024 into a modern interpretation though not written in stone still a very pleasant interpretation at that. The author finishes her book with a hieroglyphic transcript of the papyrus.


The content of "Rebel in the Soul" is one of the most fascinating and spiritual papyrus' to come down to us and though very complex in it's surviving condition Bika Reed has created from it a good read with lots of food for thought.
Posted by Timothy Reid at 6:34:00 PM