Cairo: The City of the Caliphs 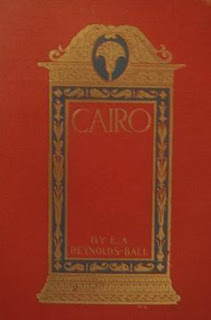 "To him his father's deeds were displeasing, and he both opened the temples and gave liberty to the people, who were ground down to the last extremity of evil, to return to their own business and sacrifices; also he gave decision of their causes juster than those of all the other kings."


This book printed after 1901 has started out stronger than I had had hopes for, of course when one reviews an antique book all must be forgiven in dates of chronology and other areas which a more accurate knowledge exists today. The author begins with an overview of Pharaonic Egypt leading into the history of the Ptolemaic period, its fall, and the rise of the Roman occupation and provincialism, leading to the eventual abandonment to the Mohammedan conquest in the early seventh century.


Particularly of interest to me was the rule of the Caliphs with dynasties of Mameluke rulers up to the Ottoman conquest in 1517, and on to its rulers, including the financially ruinous reign of Ismail which led to the British occupation of Egypt in 1882.


The author goes on to put out the political position the occupying English forces were faced with in order to right the Egyptian economy and ensure the foreign bond holders of the return on their loans to Egypt. A very interesting chapter is on the creation of the Suez canal and its benefits for the future.


The books have quaint descriptions of the various mosques in Cairo including the tombs of the Caliphs, and the condition of which the author found them more than 110 years ago. A wonderful assortment of old black and white pictures are enhanced by the authors many interesting observations on the interactions of various cultural groups in Cairo.


The author presents a short few pages on the national museum located at this time at the Ghizeh palace. The tour of its collection was tantalizingly way too small but sensational with only a few objects described including the eighteenth dynasty mummy of king Amhose I. The king is in a gallery with the fourth dynasty wooden statue known as the Sheik El beled, and not displayed with the rest of the royal mummies. The author gives Brugsh Bey's words on finding the royal mummy cache;


"My astonishment was so overpowering that I scarcely knew whether I was awake, or whether it was only a mocking dream. Resting on a coffin, in order to recover from my intense excitement, I mechanically cast my eyes over the coffin-lid, and distinctly saw the name of Seti I., father of Rameses II., both belonging to the nineteenth dynasty. A few steps farther on, in a simple wooden coffin, with his hands crossed on his breast, lay Rameses II., the great Sesostris himself. The farther I advanced, the greater the wealth displayed; thirty-six coffins, all belonging to kings, queens, or princes, or princesses."


Though I found in Chapter XVI, "The Pyramids of Ghizeh", a respect for the author who kept distancing himself from the quack pot theories on the great pyramid. Instead, he spent much of the chapter quoting Sir Flinders Petrie and was not subject to flights of fantasy on the subject.


The author writes on the Serapeum and the Apis bull cult quaint descriptions of not only the Apis bulls but the various Saqqara monuments complete with the author's distaste for a display in the national museum at Ghizeh titled "Fragments of King Unas".


The author gives a nice round-up of the various excursion to tombs and temples on his journey south to Tell el Amarna, Thebes and many other sites. The book closes off with the latest archaeological discoveries in Egypt by the Egypt Exploration Fund, and most satisfactory, the words of Sir Flinders Petrie. The appendix of the book is a letter written by Dana Estes M. A. from Assouan in February 1901 on the development of that area and particularly on the developments being made on the Assouan barrage.


"Cairo: The City of the Caliphs", exemplified everything I love in an antique book with its old photographs. It presents the reader with a charming but obsolete view within the telling of a much more ancient romantic tale of people from a period long gone.

'Antiquity appears to have begun
Long after thy primeval race was won
Thou couldst develop, if that withered tongue
Might tell us what those sightless orbs have seen
How the world looked when it was fresh and young,
And the great Deluge still had left it green;
Or was it then so old that History's pages
Contained no record of its early ages?'