The Tomb of Tutankhamen 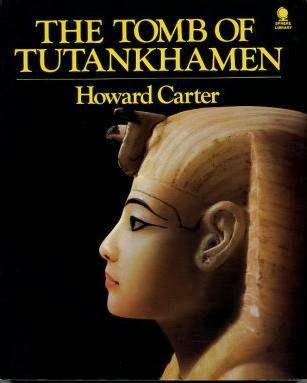 This book has been in my collection for years and though I am not interested in reading that story yet again, rather it is the discoverers telling of his find and as a result, this book must stand at the front of the pack on the subject. Howard Carter's notes and observations have been the foundations of thousands of books that followed, and to whom the subject of "Tutology" must be attributed its founder.


I dedicate this account of the discovery of the tomb of Tutankhamen to the memory of my beloved friend and colleague, LORD CARNARVON, who died in the hour of his triumph.


Mr. Carter opens his book with an introduction to Tutankhamen, his queen and the world of chaos inherited from his father-in-law Akhenaten of whom Mr. Carter feels is the most over-rated of the pharaohs. The death of Tutankhamen leaves his Queen Akhesenamen sending a letter to the king of the Hittites asking for a son for her to marry that would become king of Egypt.


Mr. Carter is next on to the Valley of Kings, ground the author spent years excavating. We read on of the occupying and eventual robbery of the tombs in ancient times. The story of ancient court documents tell tales of what happens when the robbers are confronted with the unviolated tomb of a XVII Dynasty king.


The travels of the valleys original occupants are recounted from inscriptions left on their coffins and wrappings in ancient times, till the final round-up and placement into two royal caches containing most of the rulers of the empire period.


"There, huddled together in a shallow, ill-cut grave, lay the most powerful monarchs of the ancient east, kings whose names were familiar to the whole world, but whom no one in their wildest moments had ever dreamt of seeing. There they had remained, where the priests in secrecy had hurriedly brought them that dark night three thousand years ago".


The modern history of the Valley of Kings is recounted including many of the explorers from the 19th century and their discoveries in the valley. Mr. Carter says of the robbery of Amenhotep II in 1901,


"The thieves were subsequently tracked down by the Chief Inspector of Antiquities, and arrested, although he was unable to secure their convictions at the hands of the native courts."


Mr. Carter was the chief inspector of antiquities who tracked down the thieves why he does not say that is rather curious. The author tells about other discoveries he had made including Hatshepsut's first tomb and a candidate for the tomb of Amenhotep I high up on the Dra abu'l Negga necropolis, both of which he was led too.


As the author tells his story we find him excavating in the Valley of the Kings for Lord Carnarvon and the early on discovery of workmen's huts below the tomb of Ramses VI. A few years later Mr. Carter removed the first workmen's hut when his team found the first step.


After excavating out the steps. the author found himself in front of a tomb carrying the seals of the king he was searching for, Tutankhamen. The author closes the tomb acquiring all the things he is going to need to take on the challenge ahead of him, this includes the gathering of an elite crew of Egyptologists.


The antechamber is finally entered and after some stunned moments, the author realizes there is no coffin and then the sealed doorway comes into view between the two life-size guardian figures of the king. With this, Mr. Carter begins a description of the antechamber and its contents including some of the challenges he faces in the preservation of certain objects such as the pile of chariots with leather elements which had turned to a glue substance.


The author points out some of the most important contents in the antechamber with two full page color pictures of two of the rooms most outstanding treasures. The clearing of the antechamber becomes more complicated as throngs of tourists crowd the mouth of the tomb waiting for the objects to appear from within.


We are presented with the evidence for the number of robberies in the tomb in ancient times before the building of Ramses VI's tomb. The unexpected pressure of the mob not only outside the tomb but the countless introductions in the name of courtesy as everyone in Luxor wanted in to examine the tomb occupying large amounts of the excavators time which would be better working to preserve and catalog the fragile contents.


The team needed a laboratory away from the tourist and the tomb of Seti II fit the bill as the tomb has few visitors and is off in a wadi which could be closed to visitors. We are presented with the various materials and the restoration needs by the restorers whether they can be conserved in the tomb or the laboratory or even the Cairo Museum.


The antechamber now cleared of all but the sentinel statues of Tutankhamen the stage was set for the removing of the blocking in between the statues. The cream of dignitaries were present as the blocking was removed and the gold wall of the outermost shrine came into view, enough for an exploration of the treasury and the opening of the outermost shrines doors revealing another set of doors but this time sealed.


Mr. Carter puts forward the two identities of Tutankhamen including his propaganda as a god-king and the boy revealed in his tomb with tiny chairs and objects of endearment bringing the viewer into contact with a mortal boy. The author turns to his description of the burial chamber, the funeral and placement of objects in the burial chamber of which can only have reasons of ritual.


I really did not need an entire chapter on the chariots found in the antechamber as wonderful as they are including their accessories. The author stands before a wall of gold figuring how to dismantle the shrines surrounding the sarcophagus with the end results that the outermost shrine cannot be removed from the burial chamber until all the other interior shrines are removed, only then can the outer shrine walls be manipulated out of the tomb.


The shrines removed the author now opens the sarcophagus to find a series of ever more magnificent shrouded and garlanded coffins till Mr. Carter is at last in the presence of the king. Unfortunately, the kings mummy is glued to the bottom of his inner coffin with resins and the hoped for the unwrapping of the king is impossible, the kings mummy has to be extracted piece by piece using melted wax.


The authors hopes of the king's mummy to be in better condition than the broken royal mummies found in the two royal mummy caches is dashed as the kings mummy is in even worse condition than the other kingly mummies due to the buckets full of resin which has charred the corpse. The colored picture of Tutankhamen's mask is an outstanding picture of the object which presents a soft lifelike complexion to the kings face.


The author deals with Egyptian burial customs in relation to the contents of the tomb and the placement of numerous objects found on the king's mummy, some of which are unique finds of unknown meaning , he also finds that three of these objects are made of iron. The face of Tutankhamen is fairly well preserved, protected by his mask and away from where the buckets of resin were poured, the morticians avoiding the mask and the feet of the king.


The book is of course filled with Harry Burton's magnificent photographs of the excavation of which the taking apart of the mummy are some of the most interesting. With the kings mummy dealt with the author takes down the boards which have sealed the treasury for the last four years.


The outstanding object of this room is the canopic shrine containing the kings organs, though many of the artifacts in this room appear to have ritual purposes and are of strictly funerary nature. Of note in the chamber was a rather crude group of 16 model tools of iron, covered in rust, bringing the total of 19 objects in the tomb made of this extremely rare metal of the Bronze age.


In all of the 19 iron objects in the tomb all are of crude workmanship except the iron blade on one of the daggers attached to the kings mummy which is finely worked. Mr. Carter expresses his experiences excavating tombs of many kings in the valley and had never found so much as a scrap of iron, going on further that in his excavations of removing dietrus from the valley to find scraps of copper which had broken off tools in ancient times but within the strata not a piece of iron.


We are next onto the annex starting  with a lovely picture of one of Tutankhamen's shabti's and an elaborate calcite vase. The state of the annex presented to Mr. Carter and his team, a state of chaos from floor to ceiling with some fragile vessels on top of what at any moment could be turned into an "avalanche of antiquities".


We are presented with descriptions of objects as they appear and in varying states of preservation, the belongings of a boy with child size chairs and the king's toy box. The contents of which are scattered on the chamber floor from the depredations of the robbers who violated the tomb in antiquity.


"When the metal robbers made their first incursion, it is evident that they crept under the Thueris-couch in the antechamber , forced their way through the sealed doorway of the Annex, ransacked its entire contents for portable metal objects, and were, no doubt, responsible for a great deal of disorder found in that chamber." and "Subsequently-it is impossible to say when- a second robbery took place." and "There was not a stopper of a jar that had not been removed, not a jar that had not been emptied. On the interior walls of some of the vessels, that had contained viscous ointments the finger-marks of those are visible to-day."


Mr. Carter ends his book with a chapter on the causes of deterioration to the tombs contents including the methods used to preserve as many of the artifacts as could be saved. In the first appendix, Douglass Derry reports on the condition of the kings mummy and a comparison to the other known royal mummies of the empire.


The books second appendix is especially interesting in regard to the contents of the floral garlands on Tutankhamen's coffins and mummy. How can one criticize such a book, yes sure it does have its tedious moments, but for those Egyptophiles, it is one of the genre classics and those interested should absolutely read "The Tomb of Tutankhamen".