Gift of the Nile 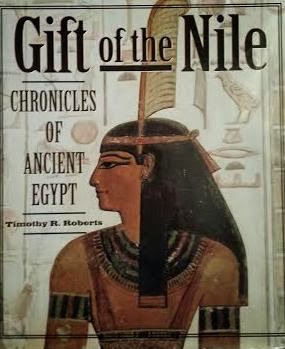 
I guess this book has been on the shelf for a few yeas because it is large and slightly cumbersome and I had not been familiar with the authors work. The book opens with a nice map of Egypt and a layout that would be appropriate to a young person, though the size is bound to be a challenge.


The two-page timeline presents interesting tidbits to represent periods and dynasties. Chapter one starts with a two-page photo of a beautiful double pot from the Pre-Dynastic period known to archaeologists as Naqada period, from the site of discoveries.


The author takes the reader to the earliest Egyptian's who left behind mass quantities of crude stone axes to the Aterian culture and a graveyard numbered 117 which possesses evidence of early practices in agriculture. Within just four pages we are presented with four objects rarely published and remarkable in content. Mr. Roberts moves on to the Bardarian and Merimdan cultures taking us from the prehistoric to the edge of the dynastic period.


"People such as the notorious French art dealer Jacques de Morgan ransacked sites for large and spectacular pieces of art to sell in Paris. The worst of the lot, however, was Emile Amelineau, who not only shared de Morgan's lust for the flashy, salable pieces but also smashed less spectacular examples of art to drive up the value of those he chose to keep."


These are two examples of archaeology of the first hundred years in Egypt, which was that of treasure hunting until Sir Flinders Petrie, with the author laying down the work of the man known as the grandfather of archaeology, in this case particularly the work Sir Petrie did at the site of Naqada in the years of 1894-95.


Mr. Roberts is onto the origins of the Egyptian state leading up to 3100 B.C. using examples of the mace head of Scorpion and the Narmer palette as the leading documents of the period to describe the rise of kings of the two lands at that date.


We are onto ancient Egypt's Archaic period and Old Kingdom beginning with the Archaic Dynasties I, II, which are explored with the power of the kings and the tombs at Saqqara and Abydos. This takes the reader into the age of the pyramids and its leading architect Imhotep erecting his King, Djoser's funerary monument.


The usual evolution of the pyramids from Djoser to Khufu and on is dealt with including the burials of other nobles of the pyramid age particularly Khufu's mother Hetepheres and Khufu's successors Khafra and Menkaura. Some of the ancient Egyptian histories best-carved reliefs also come from this age with beautifully sculpted walls displaying everyday activity.


The author explores the literature of the Old Kingdom leading with the pyramid texts but also including medical texts and manuals of behavior. In contrasting images, we have on one page a luxurious servant statue making beer completely painted while on the opposite page the viewer sees the "famine relief" from King Unas' causeway.


Mr. Roberts moves on to the First Intermediate period as well as the Middle Kingdom period in the following chapter starting with the breakdown of central authority and the rise of numerous petty kings who ascend the throne only to be overthrown in an age of chaos. The ninety years of the First intermediate period comes to an end and the ancient Egyptian's now found themselves under the rule of two dominant powers at Thebes and Herakleopolis with the rulers of Thebes uniting Lower and Upper Egypt establishing the XI Dynasty.


We are presented with the democratization of the afterlife and the rise in the use of shabti figure to do the owners bidding in the afterlife. The author talks about the rise of the cult of Isis and Osiris in which with the right spells anyone could now become an Osiris and rise again in the underworld to live.


As the XI Dynasty ends we find the Kings Vizier Amenemhet rising to the position of king founding the XII Dynasty and ancient Egypt's "Classical Period". The kings of the XII Dynasty set out a program to engineer the Fayum oasis while taking control of the nomarchs that might test the kings strength resulting in the epoch of the Middle kingdom in the reigns of Senwosret III and his son Amenemhet III.


For all the glory of the period, the monuments of these kings have not survived including sadly Amenemhet III's famous labyrinth where the king's mummy was interred in one of fifteen hundred rooms under the labyrinth surrounded by mummified crocodiles. The literature of the period included the development of the coffin texts to the Egyptian book of the dead.


The science and medicine of the Middle Kingdom is fascinating particularly the medical texts of the time with among the cures a successful remedy for contraception. The Middle Kingdom town of Kahun was lived in during the building of Senwosret II's pyramid complex at Lahun and its preserved remains have left evidence of the homes and daily life in the town, a town that had only one way in and one way out.


The death of Amenemhet IV finds the royal household without a male heir so Queen Sobekneferu reigns until 1783 BC. The breakdown of central authority is not the collapse of the Old Kingdom but a period of bureaucratic realignment in the XIIIth Dynasty with its first ruler Wegaf the first of seventy kings of this dynasty.


The fragmentation of power leads to foreign kings occupying the delta under Dynasties XV &XVI with Dynasty XVII at Thebes. The limited power of many of these kings have left few monuments and many of the kings of the era are represented by nothing more than their names from an ancient list.


The conquest of the Hyksos by the Theban King Ahmosis unites Egypt and founds the XVIII Dynasty, the New Kingdom and the start of the empire. Again we find another remarkable photo, this time, it is an image of the mummy of King Rameses II showing that his genitalia has been torn off.


It disheartens myself that with this well-told story I find the mistakes though to a degree I wonder how much was unseen in the proofread book and/or whether the editor was unfamiliar with ancient Egypt. The mistakes include a number of misidentified beings, while Amun's wife is not Khons and their son is not Mut or that now Khnum, the potter is accorded as a goddess, these are incorrect!


The line of XVIIIth Dynasty kings is laid down in an easy to read format suitable for ages ten and up, with the remarkable building projects by kings that had the time and concern and as usual, Akhenaten dominates his predecessors with sheer audacity. The final collapse of the dynasty followed being replaced by new kings from the delta including the exploits of Seti I and his long-lived son King Rameses II.


Still yet more mistakes, I mean lots of mistakes including the author claiming that four lovely blue faience stipula vases are Rameses II's canopic jars while the author talks about Rameses tomb in the Valley of Kings yet he appears to be describing the tomb of Seti I.


The beautiful pictures are still present though the mistakes keep coming to as the author describes a three chamber shabti box surrounded by three shabti, as an unusual three chambered canopic box. The military role in the New Kingdom is examined as is the literature and medicine of the period.


Clearly the photos are what's special about this book the authors promise however was eroded by a continuous stream of mistakes and though the book is child friendly I would not give the book as a gift concluding, I will likely go through it again looking for certain images I have only seen in this questionable "Gift of the Nile".
Posted by Timothy Reid at 8:26:00 PM