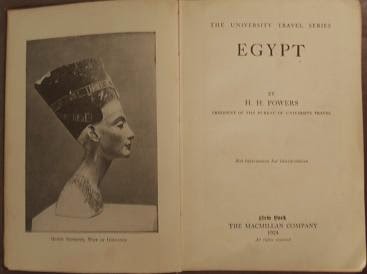 Right from the start of this pocket-sized book by Harry Powers the author appears to be a bit of a pessimist as his journey takes him to Egypt from Madeira the author says " the thoughtful traveler will view Madeira with mingled feelings. The shadows in the picture are due less to depravity (largely imported) than to sheer backwardness." Our guide goes on to say of Monte Carlo "It used to hide its depravity under a certain tone and elegance."


Having, at last, arrived in Egypt our friend Harry begins describing the things to see including Pompey's pillar of which he says "a huge and meaningless shaft of uncertain origin concerning which little is known except that it had nothing to do with Pompey."


After a "monotonous" but interesting journey to Cairo our friend tours various mosques and provides some very interesting descriptions of a few of the most important but also points out the shoddy construction and dilapidated conditions of the buildings.


The author is clearly a learned man with great insight on the subject of the arts of the individual periods taking the reader to less viewed displays in the Cairo museum and though the authors chronology is off he is not off by that much. As our guide makes his way around Egypt in chronological order he describes which sites to see and those that hold little interest.


In the pyramid fields Powers describes the pyramids and tombs from the poorly constructed step pyramid of king Djoser to the "false Pyramid of Meidum" but being suitably impressed by the pyramid of Khufu the author goes on to give Herodotus' account of it's building. The book has many nice but small images including one unfortunately labeled "Sarcophagus of King Khufu, Cairo museum".


The mastabas of Ti and Ptah-hotep at Sakkara very much impressed and are a recommended visit for their beautiful reliefs of the everyday life of the ancient Egyptians also at Sakkara the author visits the Serapeum remarking on the poor engraving on the massive sarcophagus' and a review of that cult.


Our friend Powers recommends the middle kingdom tombs at Beni Hassan not for their colorful but inferior images but for their architecture including the introduction of the Doric column and the development of the Egyptian column thereafter. Assiout's badly damaged middle kingdom tombs stand as great square caves with little left of interest except of course the magnificent view of the Nile valley from them.


We find ourselves at Thebes because the author wishes us to walk the temple of Mentuhotep II at Deir el Bahri talking about the architectural concept of the building. The author then goes on to Luxor and the period of the empire with an excellent overview of the decline of the second intermediate period with the rise of the eighteenth dynasty kings.


Our guide Powers gives an out of date explanation of the order of the Thutmoside rulers with the order given going: Hatshepsut and Thutmosis III,-Hatshepsut,-Thutmosis III,-Thutmosis II, not all that uncommon interpretation for the early 1920's. The black and white picture of Hatshepsut's obelisk is a gem.


The author goes on with the evolution of Karnak from the missing middle kingdom temple to the ever grander elements added by the Thutmoside and Ramaside kings. Powers, in the end sees the overview of the chaotic construction of the temple lacking in overall vision for the complex.


With some excellent old photographs, our friend makes his way through the Valley of Kings and recommends the viewer see a hand full of tombs including those of Thutmosis III, Amenhotep II, Seti I and Rameses VI.


We find Powers stopping in front of the well in the tomb of Amenhotep II pondering the human skeletons found at the bottom of it and wondering "Were these the builders of the tomb murdered that its secret might die with them? Or were they grave robbers who fell in here and were unable to escape?"


Our guide ends this journey in the valley with a visit to the tomb of Merenptah descending to its burial chamber to view the figure on the lid of the sarcophagus left there. Interesting though the author acknowledges the discovery of the tomb of Tutankhamun he says nothing else about.


As we make our way upstream the author breaks from his chronology to talk about the remarkable Ptolemaic temples of Kom Ombo, Edfu, Esna, and Dendera. At Esna, we find the beautifully preserved temple still buried deep in the mud and hidden from view surrounded by houses. While on his return journey the author can see the temple of Dendera from his boat, with our friend Powers disembarking the boat to cross fields of beautiful opium poppies to reach the temple.


Our guide takes us past the partly flooded island of Philae and on to Abu Simbel past the cataracts and the back down the Nile finishing off at Abydos and the reliefs on the temple of Seti I. The author from here discusses the history of art from the early reliefs at Sakkara to the reliefs found in this temple.


I can say after having read this book that it was well worth my time though one must be warned the author has a habit of looking down on those less than English types. Egypt by Harry Powers is an interesting place to see with the authors old fashion views forgivable to his knowledge of the history of Egyptian art.
Posted by Timothy Reid at 4:35:00 PM